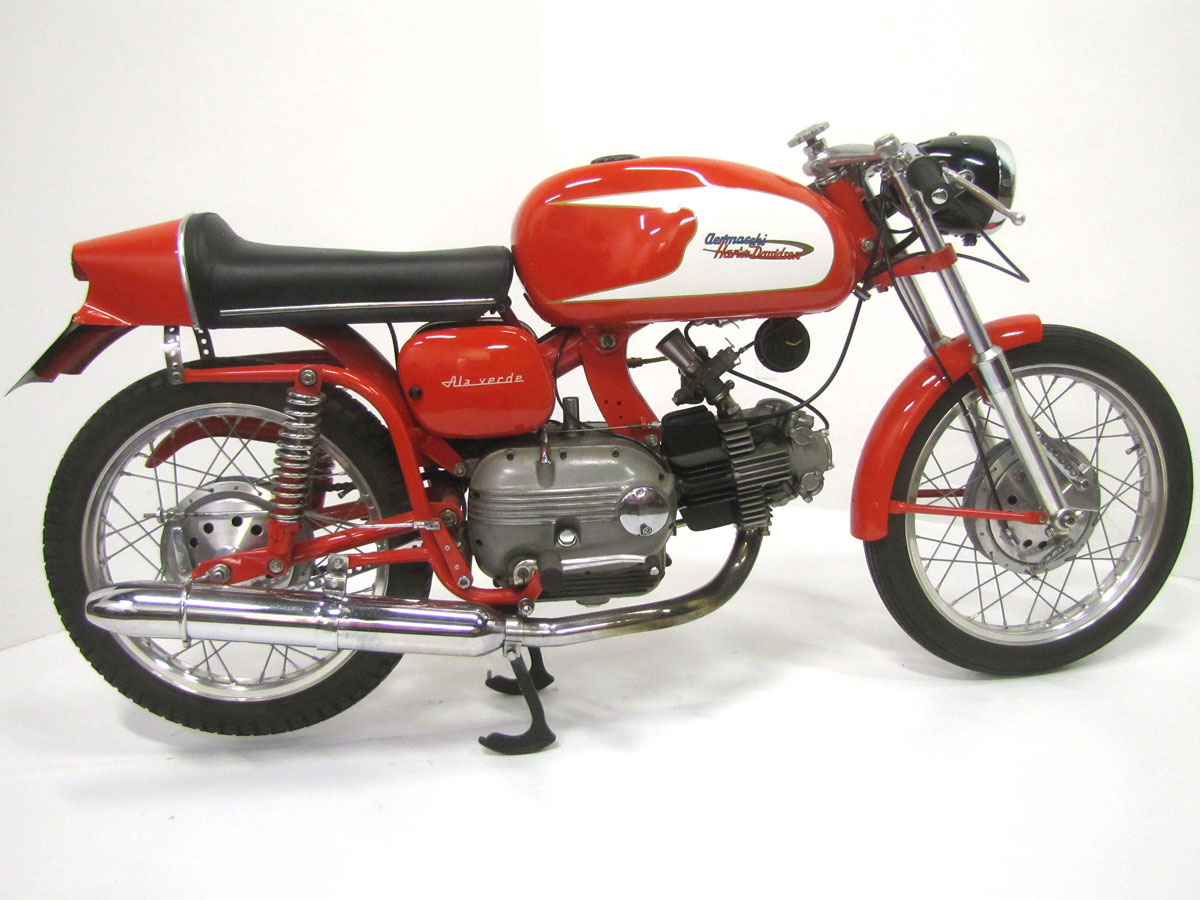 Translated by most sources, “ala verde” is Italian for “green wing.” After only moderate success with the streamline-styled Chimera*, Aermacchi took the sloper 175 cc engine out to about 250cc’s and adapted the stylish Chimera’s single shock spine frame into a more conventional twin shock design. The 175 and 250 versions began a 15 year run in a range of street and racing bikes. The design became a popular street bike, but also achieved amazing results in the hands of racers here, in Britain and in Europe.

Unusual with its sloping single cylinder and spine frame, this Aermacchi design was otherwise a straight forward using an overhead valve air-cooled single cylinder engine. Initially using six volt battery ignition, race versions incorporated magneto ignitions, and later machines were higher revving short strokes with five-speed gear boxes. You can imagine maintenance was simple even if you had to pull the engine, important with race bikes.

Aer Macchi means “air machine” in Italian. Aermacchi was founded in 1912 by Giulio Macchi to build airplanes. Soon after World War II, in 1951, the company expanded to make motorcycles. Harley-Davidson, looking for a way to get proven small motorcycles to their dealers, around 1960 bought a 50% share of the company, and adapted an existing Aermacchi, a 250cc motorcycle to become the Harley Sprint. Indeed through this 175 cc four-stroke pushrod “sloper” engine design, the Harley Sprint engine began its life. Note the dual branding on this bike’s tank graphics. Many more two-stroke and four-stroke Aermacchi-built bikes became part of the Harley-Davidson line.

Designed by Alfred Bianchi, introduced in 1956 and very radical for the time, the original Chimera was not a sales success; some documents state less than 125 of the 175cc machines were built. Available as both a 175 and a 250 it was later redesigned as a more conventional motorcycle which gave birth to the Harley-Davidson Sprint available in displacements up to 350 cc’s. Typical for the time and Italian design, the bike shifts on the right and has no intake air filtration, unusual is the left side kick starter.

A close look at this motorcycle, located in the Museum’s Cafe Racer exhibit, reveals a few custom touches. The forks have been stripped of their sheet metal covers, have been polished and alloy seal retainers installed. The front fender is trimmed a bit and the front drum brake ventilated. The seats on most Ala Verdes are decked and completely upholstered whereas this bike has a stylish hard finished seat cowl of unknown origin and special inner fender. Rims are polished alloy instead of chrome plated steel.

When you vsist the National Motorcycle Museum you can take in American Picker Frank Fritz’s Sprint, John Parham’s Pebble Beach winning blue and cream Chimera* 175, and other great Italian designed motorcycles. This Ala Verde is from the Jill & John Parham Collection and all of these Sprint versions are on the Museum website under MOTORCYCLES.