Ann Ferrar, journalist and author of “Hear Me Roar: Women, Motorcycles and the Rapture of the Road,” considers Bessie Stringfield one of her life’s greatest inspirations. Ferrar met and spent time with Ms. Stringfield during Bessie’s golden years, and thus a friendship blossomed between two women riders of different generations and very different life experiences. When Ms. Stringfield was inducted into the AMA Motorcycle Hall of Fame in 2002, Ferrar wrote a short biography of Bessie for the HOF website, part of which appears here. 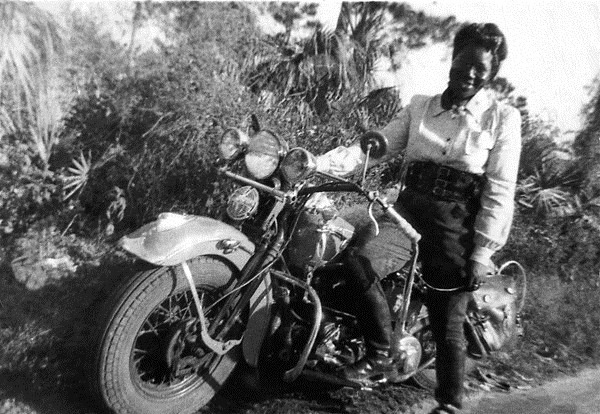 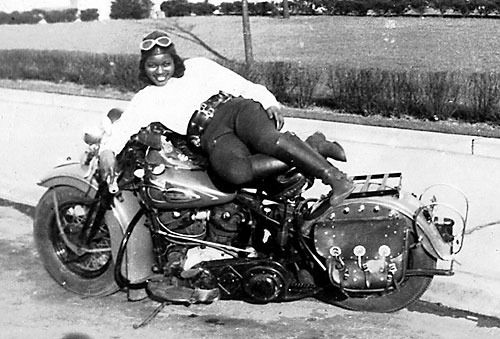 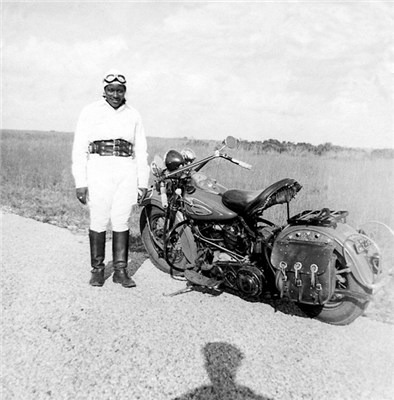 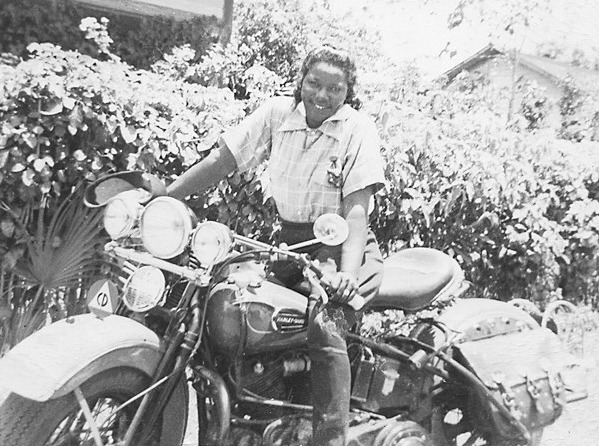 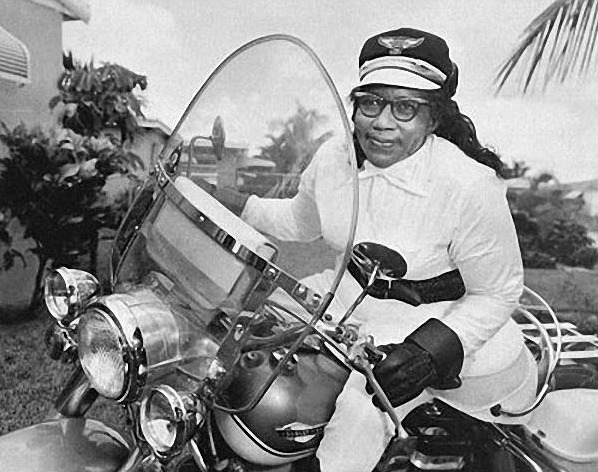 In the 1930s and 1940s, African American Bessie Stringfield took eight long distance, solo rides across the United States. She dismissed the notion that “nice girls didn’t go around riding motorcycles in those days.” Further, Bessie was apparently fearless at riding through the Deep South when racial prejudice was a tangible threat. Was Bessie consciously championing the rights of women and African-Americans? Bessie would most likely have said she was simply living her life in her own way.
Early on, Bessie had to steel herself against life’s disappointments. Born in Kingston, Jamaica in 1911, she was brought to the United States as a young child. Orphaned by her natural father, she was later adopted. She was 16 when she climbed aboard her first bike, a 1928 Indian Scout. With no prior knowledge of how to operate the controls, Bessie proved to be a natural. She insisted that the Man Upstairs gave her the skills. “My [adoptive] mother said if I wanted anything I had to ask Our Lord Jesus Christ, and so I did,” she said. “He taught me and He’s with me at all times, even now. When I get on the motorcycle I put the Man Upstairs on the front. I’m very happy on two wheels.”
Bessie was especially happy on Milwaukee iron. Her one Indian notwithstanding, Bessie said of the 27 Harleys she owned in her lifetime, “To me, a Harley is the only motorcycle ever made.”
At 19, she began tossing a penny over a map and riding to wherever it landed. Bessie covered the 48 lower states. Using her natural skills and can-do attitude, she did hill climbing and trick riding. But it was her faith that got her through many nights. “If you had black skin you couldn’t get a place to stay,” she said. “I knew the Lord would take care of me and He did. If I found black folks, I’d stay with them. If not, I’d sleep at filling stations on my motorcycle.” She laid her jacket on the handlebars as a pillow and rested her feet on the rear fender.
During World War II, Bessie worked for the army as a civilian motorcycle dispatch rider. The only woman in her unit, she completed rigorous training maneuvers. She learned how to weave a makeshift bridge from rope and tree limbs to cross swamps, though she never had to do so in the line of duty. With a military crest on the front of her own blue Harley, a “61,” she carried documents between domestic bases.
Bessie encountered racial prejudice on the road. One time she was followed by a man in a pickup truck who ran her off the road, knocking her off her bike. She downplayed her courage in coping with such incidents. “I had my ups and downs,” she shrugged. In the 1950s, Bessie bought a house in a Miami, Florida suburb. She became a licensed practical nurse (LPN) and founded the Iron Horse Motorcycle Club. Disguised as a man, Bessie won a flat track race but was denied the prize money when she took off her helmet. Her other antics – such as riding while standing in the saddle of her Harley – attracted the local press. Reporters called her the “Negro Motorcycle Queen” and later the “Motorcycle Queen of Miami.” In the absence of children, Bessie found joy in her pet dogs, some of whom paraded with her on her motorcycle.
Late in life, Bessie suffered from symptoms caused by an enlarged heart. “Years ago the doctor wanted to stop me from riding,” she recalled. “I told him if I don’t ride, I won’t live long. And so I never did quit.” Before she died in 1993 at the age of 82, Bessie said, “They tell me my heart is three times the size it’s supposed to be.” An apt metaphor for this unconventional woman whose heart and spirited determination have touched so many lives. She was inducted into the Motorcycle
Hall of Fame in 2002.
Copyright, 1996 – present, Ann Ferrar. All rights to this content are reserved by author.