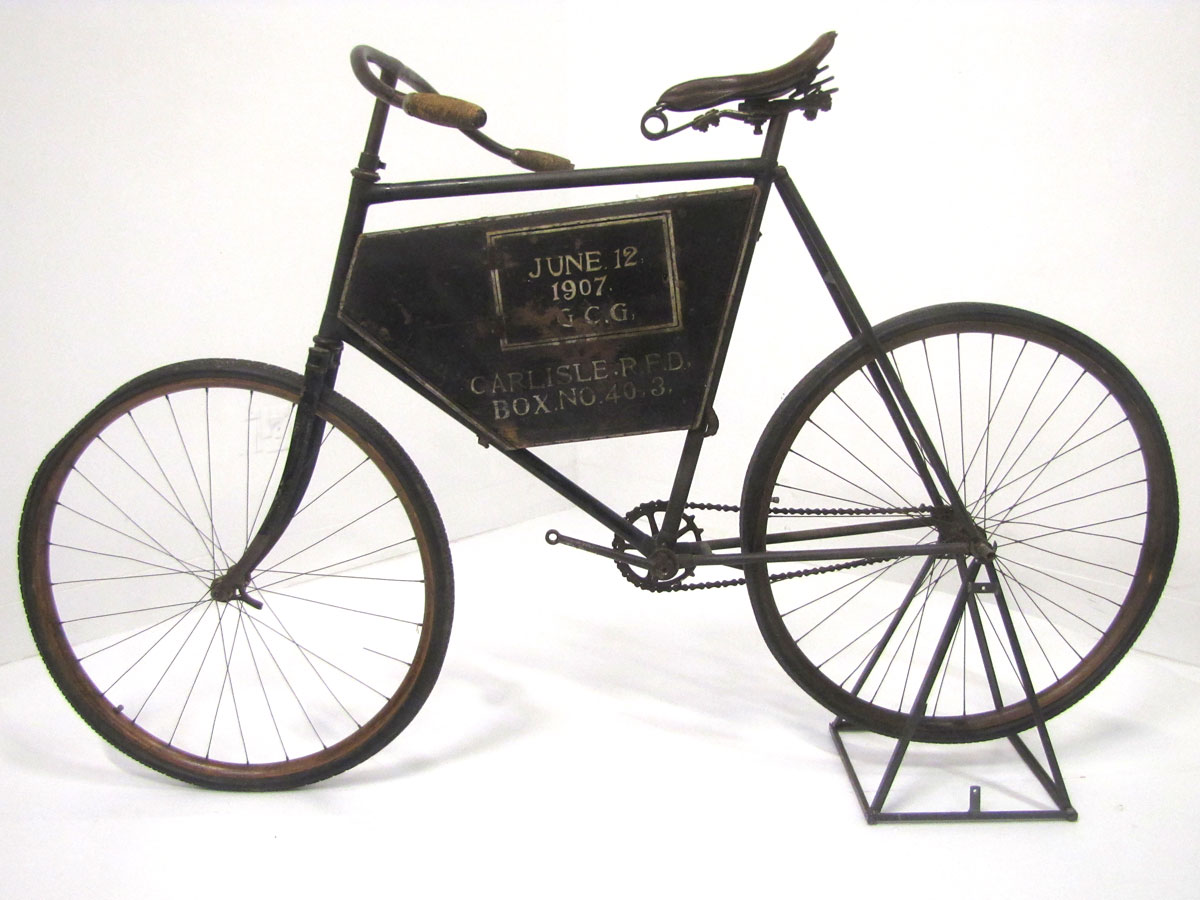 Bicycles were a very impactful “invention,” and many developments along the way made them even more useful. With the bicycle technically credited to Karl von Drais, 1816, today, battery/electric motor power has given more life to this economical form of transportation.

But back around 1900, before there were many automobiles and few American made motorcycles, the bicycle speeded up delivery. Little is known about our featured machine, a large framed bicycle made around 1900; Rural Free Delivery, possibly from Carlisle, Pennsylvania. It uses bent wood rims typical of the time, 28 inch tires. Gearing is quite tall as can be seen by the small sprocket on the pedal crank. A box fabricated from thin wood panels, nailed together, served as a compartment to keep the load of mail safe and dry. The handlebar is somewhat dropped and uses cork grips. Imagining rough roads, even city streets, the very stylish seat also looks to be stuffed, and sprung, for a bit of comfort.

A most significant invention in bicycle design is the pedal crank and how it offers a way to reduce cranking speed through the sprockets’ selected gearing. Thinking of the Penny Farthing “high wheel” bicycle, the whole reason for the large wheel diameter was slow pedaling speed that still gave good top road speed. It resulted in a very high seat level that greatly reduced the number of people who felt comfortable riding it. With the typical diamond style frame of our featured bike, in a variety of sizes, riders of all heights could reach the ground and feel comfortable.

Harry Lawson introduced a rear wheel drive “bicyclette” in 1879. He’s credited with the first design to use two wheels of the same size and a chain drive to the rear wheel via two sprockets. The design allowed for the pedals to be located under, slightly forward of the rider’s seat. This generated the standard “diamond” frame design still used today.

In its day, this bicycle was no doubt given heavy commercial use and along its 120 year history has lost a little paint and nickel plating, but is substantially original. Part of the Jill and John Parham collection, it’s one of over 40 significant bicycles on display at the National Motorcycle Museum where we favor original, unrestored motorcycles and bicycles.

1963 Aermacchi Ala Verde Scroll to top