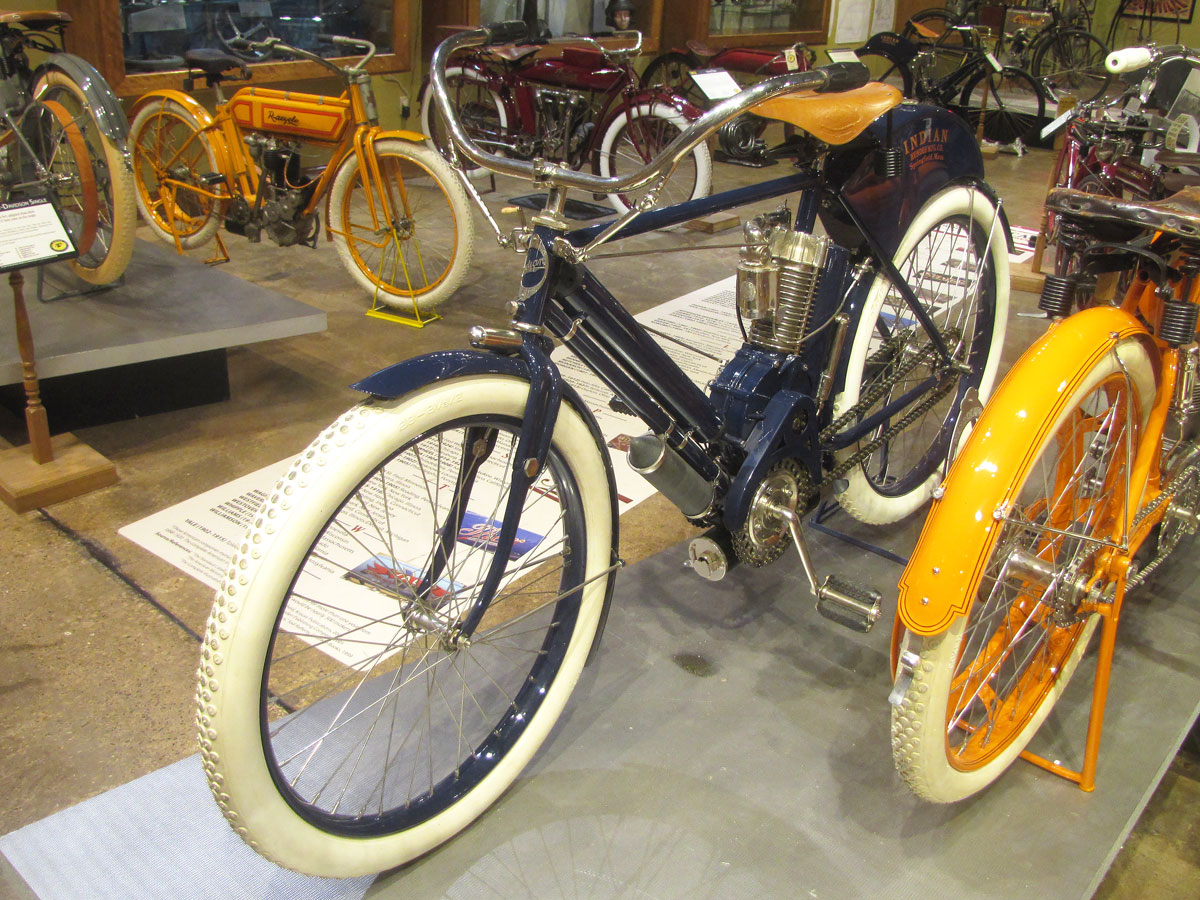 Our featured bike this week was made a year before Indian moved away from the classic “Camel Back” diamond frame design they began with in 1901. By 1905 a spring fork was added and for 1907 displacement was up to 17.6 cubic inches, 288 cc’s, rated at about 2.25 horsepower. While Harley-Davidson went the route of belt final drive for nearly its first 10 model years, Indian was all chain drive except for a few market driven belt drive machines 1909 to 1911.

In 1907 Indian manufactured over 2000 motorcycles. This is also the year that the street model V-twin was launched and engine building moved from Aurora Machine to what would become the actual “Wigwam” factory and offices in Springfield, Massachusetts. Shocking the British and European motorcycle industry, Indian won the inaugural Isle of Man TT in 1907 with their V-twin racer. By 1913 Indian would become the largest motorcycle manufacturer in the World.

Though of specific Indian design, and related to the 1900 patented engine design of Emil Hafelfinger of New Jersey, a derivative of the French De Dion-Bouton design, engines were originally  produced by Aurora Automatic Machinery Company of Aurora, Illinois. Strong bicycle-style diamond frames were made in Springfield, Massachusetts. By 1909 Indian finally moved to a loop frame design lowering the engine and the seat height. As with most manufacturers, various components were sourced from suppliers.

Though not unique to Indian, controls for throttle and spark advance reached their device via small “driveshafts” using cast joints.  Control cables would be designed in around 1920. Of course there were no front brakes until the late 1920’s and rear brakes were rod and foot pedal operated. At this time, Curtiss and Indian were the only manufacturers using a twist grip for the throttle. Most historians credit Glen Curtiss for this innovation.

You might assume that a manufacturer of motorcycles in this era would pick a design or two and stick with it. To the contrary, Indian designers and engineers were constantly evolving their machines and offered many models with a range of features some of which only lasted one year. Jerry Hatfield’s book, Standard Catalog of American Motorcycles 1898-1981, now out of print, is a good source tracing Indians in detail as well as about 175 other American brands.

Manufacturing of all Indians related to the original Springfield, Massachusetts corporation ceased in 1953. Since that time the marque has been revived several times and is now a strong brand within Polaris Industries of Minnesota, solid competition for Harley-Davidson, just like in the first half of the 20th Century.

The Gasoline Station in America Scroll to top