THE GRAND PRIZE WINNER FOR 2022 IS …William “Bill” Giles of Louisville! 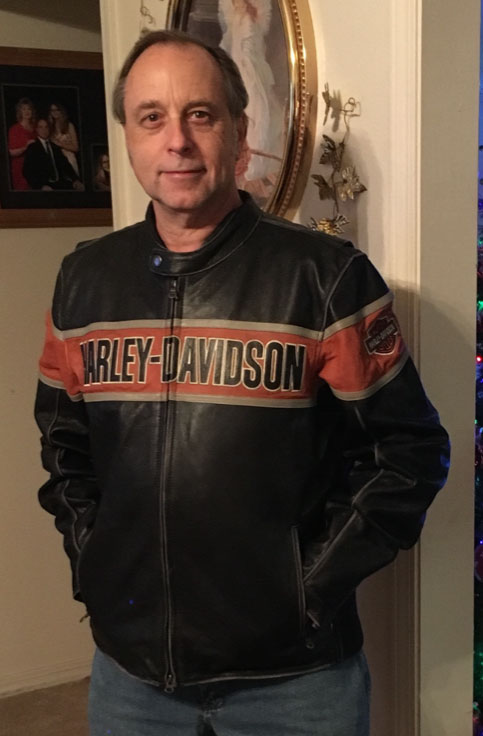 William “Bill” Giles, Jr of Keithville, Louisiana won the 1951 Harley-Davidson Panhead Bobber! His response, “I won, oh my gosh, I can’t believe it! Great! Oh man!” He won a Yamaha Grizzly four-wheeler in a local children’s sports fund raiser about 15 years ago, but this is his first winnings since. Bill received a set of personalized tickets in the mail and returned them with his donation to support the Museum. One of them won the bike for him!

Bill has been riding since about 1969 when he was 14. He’s had a Kawasaki KX80, a Suzuki 400, a DOHC 500 Yamaha, a Honda 90 Scrambler and several other bikes, but currently rides a 2003 Harley-Davidson Sportster, the 100th Anniversary Edition in black, and loves it. He’s also a J&P Cycles customer from way back. Bill has over 100 Harley-Davidson t-shirts and tries to wear one daily. He says he’ll ride the bike, but limit miles the puts on it, probably not ride too far. Retired from GM about ten years ago, he then worked till July 2022 in cable manufacturing, in both jobs doing millwright work, factory construction, all the behind the scenes work to keep things going.

We will work with Bill to get his bike shipped down to his home in Louisiana where he says he’s got space ready in his 1500 square foot home shop. Congratulations, Bill!

When we got in touch with Francis Colton of Fairlee, Vermont he said, “Terrific, I’ve never won anything before!” He says he’s a long time J&P Cycles customer, still has an old catalog to look over, see what he can buy with his $500 gift card. ”I am really happy to win. I’ll make good use of the money getting Harley accessories.”

Francis has ridden since the 1970’s, has had three Triumphs, a Harley-Davidson Fat Boy and other bikes. He started riding mini-bikes, got a Honda Mini-Trail and was hooked. Currently he rides a 2009 Harley-Davidson FX and recently acquired a Harley three-wheeler, ”The three-wheeler’s got all the stuff, Screamin’ Eagle, flames, you name it!” He’s donated to win for about three years, getting his chances by mail.

Congratulations, Francis and enjoy your shopping!

Gary Huntoon is the lucky winner of the J&P Cycles $250 Gift Card in the 2023 National Motorcycle Museum fund raiser drawing. Gary has been donating for chances to win for about ten years. This year he also donated for his brother, each getting six chances this year.

Gary started riding about 1971 on a Honda C100 “Step-Through” 50. Over the years he has ridden Honda 125’s, 450’s, and CB750’s.  More recently he’s ridden a Harley-Davidson FX, but is currently on a black 2004 Harley-Davidson Electra Glide. Gary is a J&P Cycles customer and looks forward to getting some new motorcycle accessories.

We wish them good riding with their winnings.