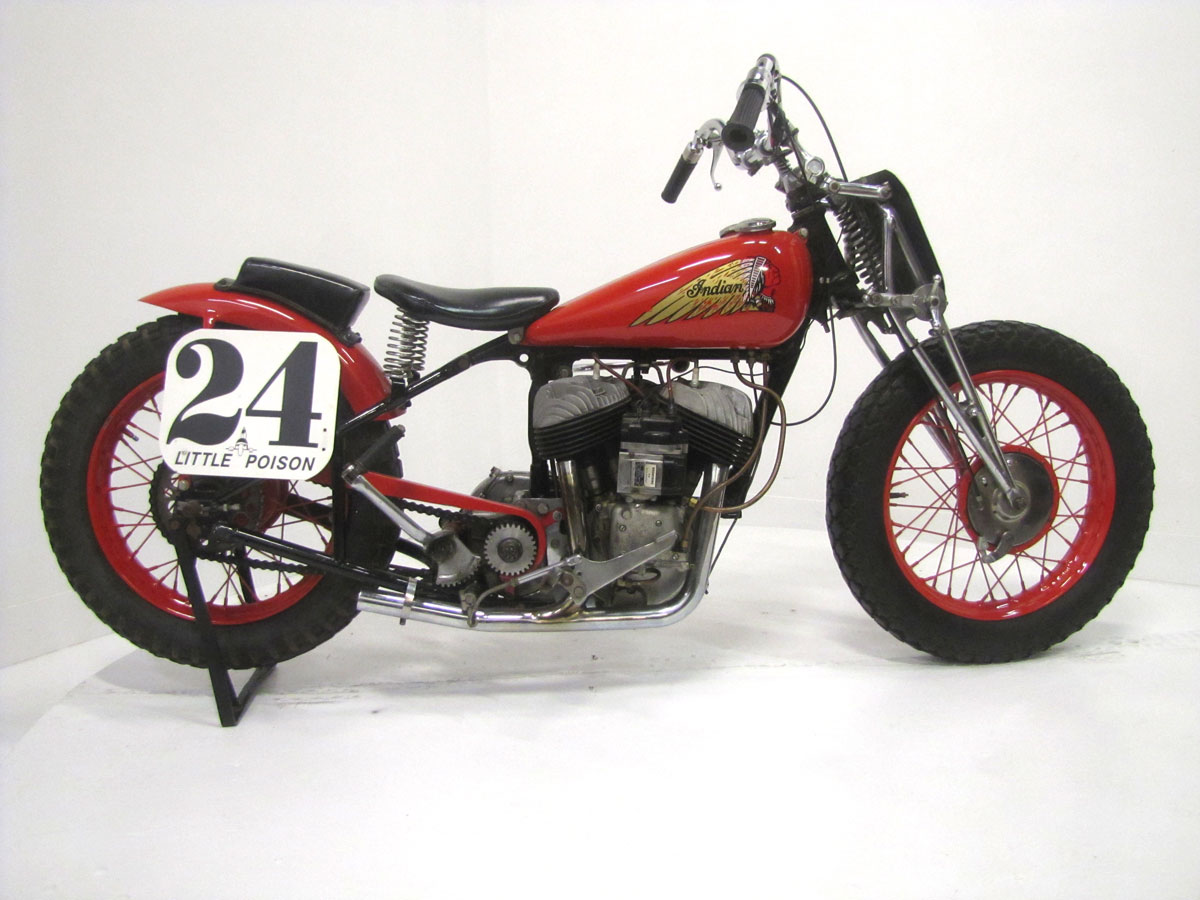 Spectators at a fairgrounds half-mile after World War II would see bikes like this Indian, plus Harley 45s and BSA Gold Stars roaring around the track, flinging dirt, fighting for traction on their way to the checker flag. All these brands and more fought for national championships in AMA Class C racing as it was one more way manufacturers could lure riders into showrooms to buy the street legal versions. In fact, Class C race bikes were all to be based on serial production 750cc flatheads or 500cc OHV machines.

This 1940 Indian Model 640 Sport Scout is a good example of an AMA Class C racer.   Following the early 1930’s Depression, the motorcycle industry was suffering from their lack of sales. Also, with loss in spectator interest and cost of factory racing teams for Class A racing, the AMA in 1933 decided to establish Class C racing. Class C racing was limited to standard serial production street legal motorcycles with a side-valve engine with no more than 45 cubic inches, or 750cc, of displacement. Overhead valve machines like the British made singles and twins were limited to 500 cc’s. Class C racing became very popular with dealers and mechanics taking the Indian vs Harley-Davidson wars to the dirt track ovals, TTs and hill climbing events.

Both Harley-Davidson and Indian were ready for the introduction of the Class C racing season. The Sport Scout, introduced in 1934 was strong contender for 20 years, taking many wins. Particularly in the early ‘50s with the Indian wrecking crew of Bobby Hill, Bill Tuman and Ernie Beckman sharing several national championship titles, and shared riding with the AMA No.1 plate over a four-year period.

The Indian Sport Scout armed with the 42-degree V-Twin side valve, 45 cubic inches (745 cc) motor was in production for nine years 1934 to 1942. Indian’s chief engineer and designer, Charles B. Franklin, responsible for the creation of the Scout (1919), Chief (1922) and Scout Pony (1932), roughed-out in sketch form the Sport Scout before his passing at 52 years old on October 19, 1932. Diverging from Scout’s long running cradled-framed and leaf-spring fork motorcycle (1920 through 1933) the first Sport Scout, similar to the Scout Pony, used a keystone rigid frame through 1940, 1941-42, a rear plunger suspension and girder fork for the range. The two-piece frame consisted of a front down tube and rear fork bolted to the engine/transmission unit by front and rear mounting plates. Lack of a frame under the motor/transmission maximized ground clearance during banking and the girder fork offer more front-end travel, making the Sport Scout a good motorcycle for dirt track racing.

Tuner alterations to this bike include a BTE twist grip throttle, a modified foot clutch, shortened hand shifter, a special foot-peg set up, a solo/pillion seat setup and a Splitdorf magneto in place of the original battery ignition. 1940 was the first year for the beautiful skirted fenders mated with 16 inch wheels, so of course the wheels are 18 inch for racing, front fender is removed, the rear fender is from an earlier Indian.

When you visit you can take in this great Indian Sport Scout named Little Poison as well as other dirt track racers. You can even compare it to a beautiful 1941 Sport Scout in stock trim on loan from Wanda Schumacher, a previous Featured Bike: https://nationalmcmuseum.org/2019/12/27/1941-indian-sport-scout-model-641/