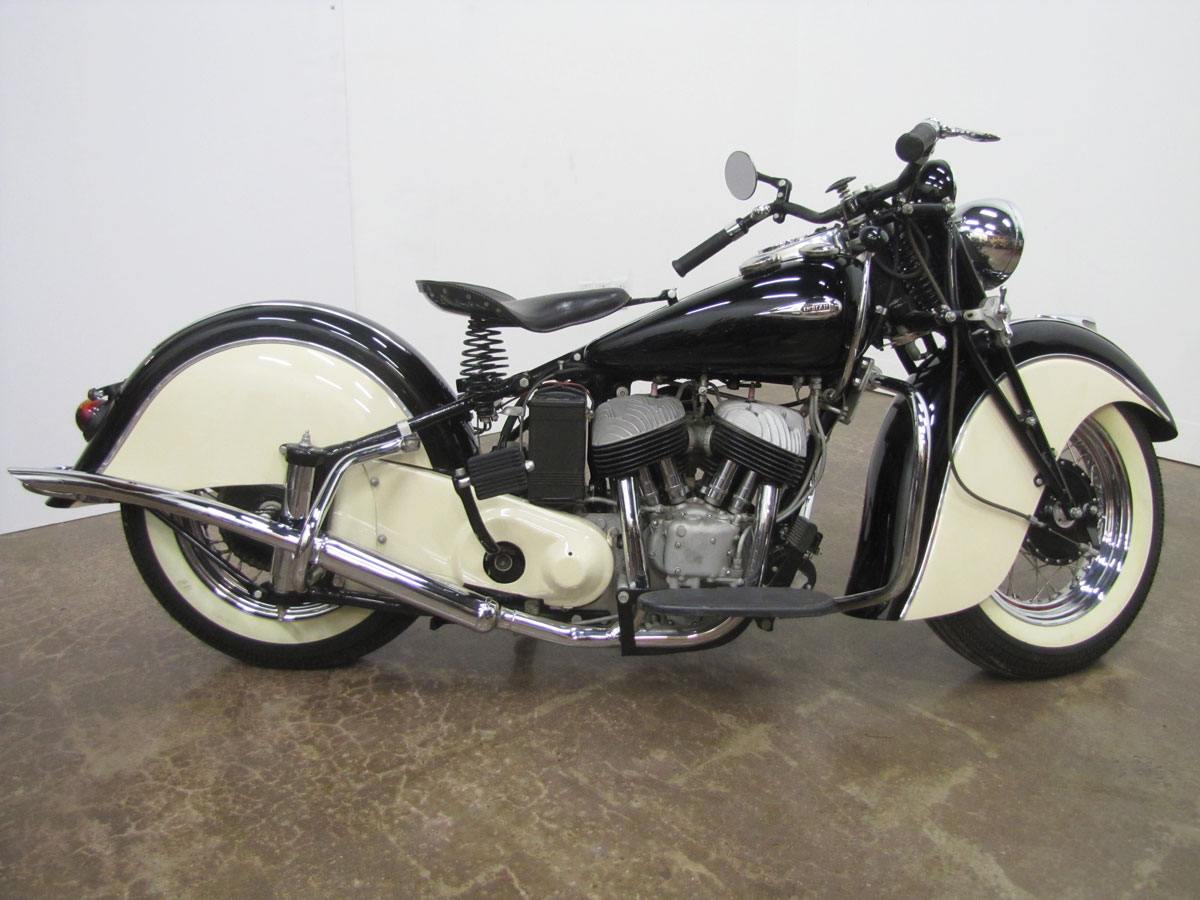 In 1940 Indian styling took a radical turn when the “skirted fender” design arrived. Adopting the company’s universal streamlined styling, the Sport Scout became more of a lightweight tourer looking a lot like the Chief. In 1941 the “spring frame” became part of the Scout design offering a plunger-style rear suspension but overall weight went up substantially.

While the heavy weight 1930’s era Indian Chief served well against Harley-Davidson’s competition, the V and RL models, Indian needed a good middleweight machine. The Scout was the answer and it came in the late 1920’s.  The skirted fenders added later were applauded by many, but at first traditionalists shunned them.

More Scout history offers that a misstep came in 1932 when essentially the same basic frame was used for the Scouts, Chiefs and Fours. Over-built, with a long wheelbase, it lead to a heavy and ponderous-feeling Scout. A more sporting chassis arrived in 1934 and the new machine was called the Sport Scout. In 1937 swoopier fenders were added, full skirted fenders in 1940. In racing history, with Ed Kretz riding, the Sport Scout won the inaugural Daytona 200-mile race in 1937. In fact the Scout won in national dirt track competition even after the Indian Motorcycle Company went out of business in 1953 and is considered one of Indian’s best designs. But note that America entered World War II at this time with civilian bike manufacturing ending. In 1946 production resumed under Ralph Rogers management with big changes and the company stumbled in many ways, was out of business in 1953. The 1941 Scout you see here was the company’s last v-twin Scout design.

This gorgeous 1941 Scout belongs to Wanda Schumacher of the Chief Blackhawk Antique Motorcycle Club. It’s one of several machines in Wanda’s collection that are on display and among the best Indians in the special Indian history exhibition. Notable is that the “Blackhawk M/C” produces the big swap meet in Davenport, Iowa just before Labor Day, and this coming year will be the 49th annual event.