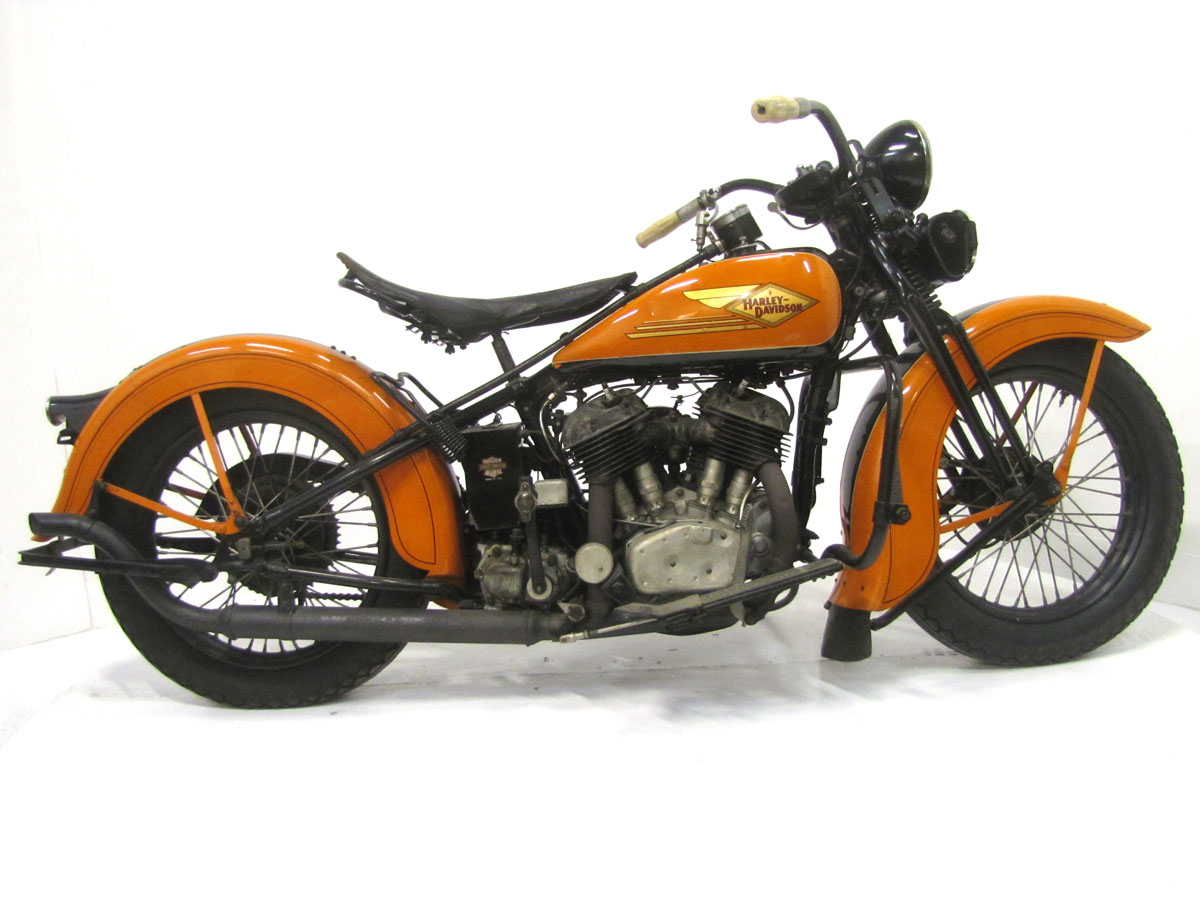 This Harley-Davidson, serial number 34VD1795, was purchased new in 1934 by John Meyer, a mailman in Bloomington, Illinois. After a couple of years of riding and a couple of spills, Mr. Meyer, being a walking mailman, decided he should put aside the motorcycle riding for awhile. With less than 1,800 miles on the odometer, he completely dismantled the bike and engine and wrapped it all, piece by piece, in the local newspaper. The pieces were placed in sturdy boxes along with all of his accessories and stored away in his basement.

But before we finish the rest of the story, a little detail on the Harley-Davison V models like Meyer’s.

Following the successful “J” models, 1915 to 1929, the first Harley-Davidson “VL’s” appeared mid-year in 1929. Unfortunately this was about two months before the stock market crash. And the new motorcycles had several mechanical problems. Together, sales were slow. The “V” model is a true flathead, otherwise known as a “side-valve,” an improvement over the “pocket-valve” J model, and the V model had new design frame.

Here and abroad the 1930’s were tough times and soon after release of the V models bike sales declined to their lowest in 20 years. With Harley-Davidson low on funds there was more focus on paint and graphics than further technical improvement and the costs involved. But the new V models were beautiful machines featuring Art Deco elements in its styling and graphics. Also keep in mind that the landmark Harley OHV twin also hit in 1936, the 61 cubic inch “EL” we now call the Knucklehead. With great optimism, no doubt, the Knucklehead was developed in the Depression era. Early ELs and other Harleys of the era shared the new streamlined graphics.

Now, back to this particular Harley VD’s story.

In 1970, John Meyer, the VD’s original owner, mentioned to his friend, Bob Davis, that he still had that old motorcycle stored in his basement and needed to get it out of there. Since Bob had ridden with John often those many years ago and remembered the bike, he agreed to buy it, still in pieces, for $300.

Bob, an excellent mechanic who loved a challenge, decided to put the bike back together exactly as it was when it had been dismantled. All the boxes were hauled to the Davis Machine Shop, carefully unwrapped and arranged for assembly. Terry Adreon, a tag-along at the Davis Shop since the early 1950’s and several other daily visitors to the shop, witnessed the rebirth of the old orange and black ’34 Harley VD, the fine Art Deco-style Harley-Davidson.

It looked great even with the dents and scratches from its early years and Bob got it running pretty well. He had years of fun with the bike, keeping it on display at the shop and riding it at least twice a year to the annual “Over-the-Hill” old-timers motorcycle picnic and to the local Harley-Davidson dealer’s Open House. Upon his death in 1995, Bob Davis’ family passed the ownership of the Harley to Terry Adreon who had witnessed the bike’s reassembly.

The bike was still in good shape with only 1854 miles on it. Terry spent that first summer he owned it by cleaning it up and trying to decide what to do with it. He learned about the ‘”Antique Motorcycle Club of America” and that there was a big show and swap meet every year in Davenport, Iowa. That Labor Day weekend, Terry took photos of the Harley to the Davenport Show with the intent of getting ideas from the experts as to just what he should do first to get it fixed up. The advice he received from everyone he talked to was ‘DO NOT TOUCH A THING ON THE BIKE!!’ and ‘BRING IT TO THE SHOW NEXT YEAR!!’ That is exactly what he did. The bike was displayed at the AMA Motorcycle Hall of Fame Museum’s HEROES of Harley-Davidson exhibit in 2003 – 2005. Later it came to the National Motorcycle Museum where it will be on display for a few years.

The National Motorcycle Museum is grateful to Terry’s son, Lynn of Orlando, Florida, and the family for loaning this fine, totally original Harley-Davidson VD to the Museum.

It’s amazing everything John Meyer got with the bike is still there, 90 years later. These include:

By the way, The national Motorcycle Museum will be set up at the Blackhawk Antique Motorcycle Club Swap Meet and Races September 1 – 3 and we hope you’ll stop by our display behind the grandstands.