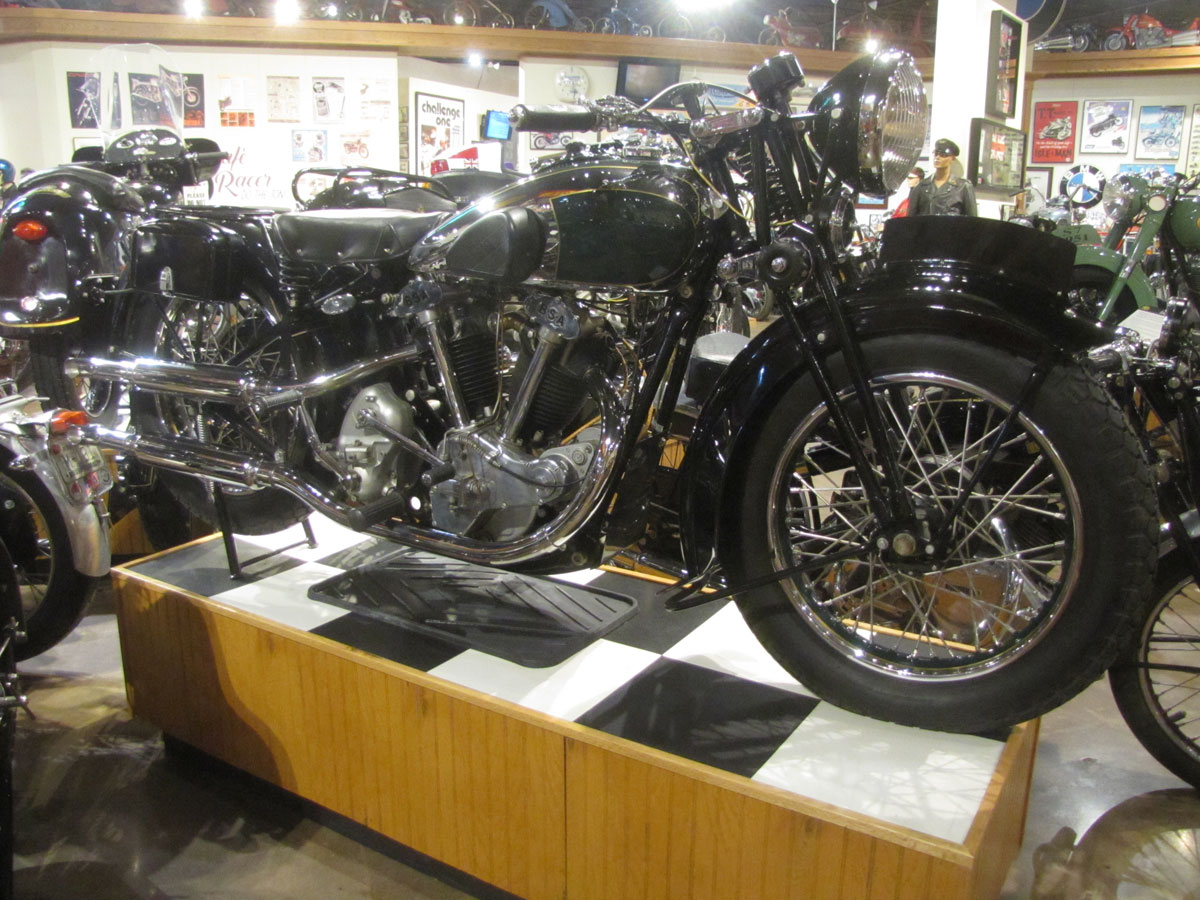 If you walk into the British motorcycle display area in the National Motorcycle Museum, you’ll be met with a wide range of single and twin cylinder motorcycles. You’ll also see a few V-twin machines, Broughs and Vincents, some of the finest machines in the Museum, and in the world. But one bike that’s a stand out, and is pretty rare, especially in the States, is a BSA Y13. Based on a 500cc military spec machine, the 750cc V-twin arrived in 1936 and production ended in 1938. The right side is the most striking given the exhaust system and the bold chrome plated pushrod tubes. But here’s a little background.

Birmingham Small Arms, BSA, originated in England in 1861, produced guns through an automated manufacturing system developed in America. In the late 1800’s they began to manufacture bicycle parts, experimented with car manufacturing in 1907 and in 1910 produced a “motor bicycle” of 3 1/2 horsepower.

Alongside Norton and Triumph, BSA in the 1930s concentrated on producing well-made and competitively priced motorcycles. The majority of these were single cylinder but for the sidecar market BSA offered the Model G 985cc side-valve V-Twin and a smaller overhead-valve V-Twin, the 499cc Model J. The V-Twin design had originally been developed for the War Office, which rejected it in favor of side-valve singles for military use. The “civilian” V-Twin appeared for the first time in 1934 as the J34-11. It was soon joined by a 750cc version, the Y13. The 750cc V-twin continued until the end of the 1938 season. Produced for only three years, the handsome Y13 is today one of the rarest and most highly sought after of all 1930s BSAs. The company built only 1,600 Y13s from 1936 to 1938. One might wonder how BSA would have fared in America if they’d stuck with developing V-twins, an American favorite.

An upscale bike, somewhat a competitor to HRD/Vincent and Brough, well styled, long and low, it featured a tool box, a rubber-mounted handlebar, a twist grip throttle and an adjustable spring seat. The Y13 is also equipped with a triangular instrument panel on the fuel tank with an amp-meter and an oil pressure gauge. The lamp there could be unclipped from its holder, used as a flashlight on the roadside.

The lugged cradle frame was designed and built strong for sidecar use, popular in England and Europe to extend the motorcycle’s usefulness. The girder front fork with a steering damper, plus quick-adjust shock absorbers, also supported sidecar use.

This great BSA is part of the Jill and John Parham Collection and is on display at the National Motorcycle Museum in Anamosa, Iowa.