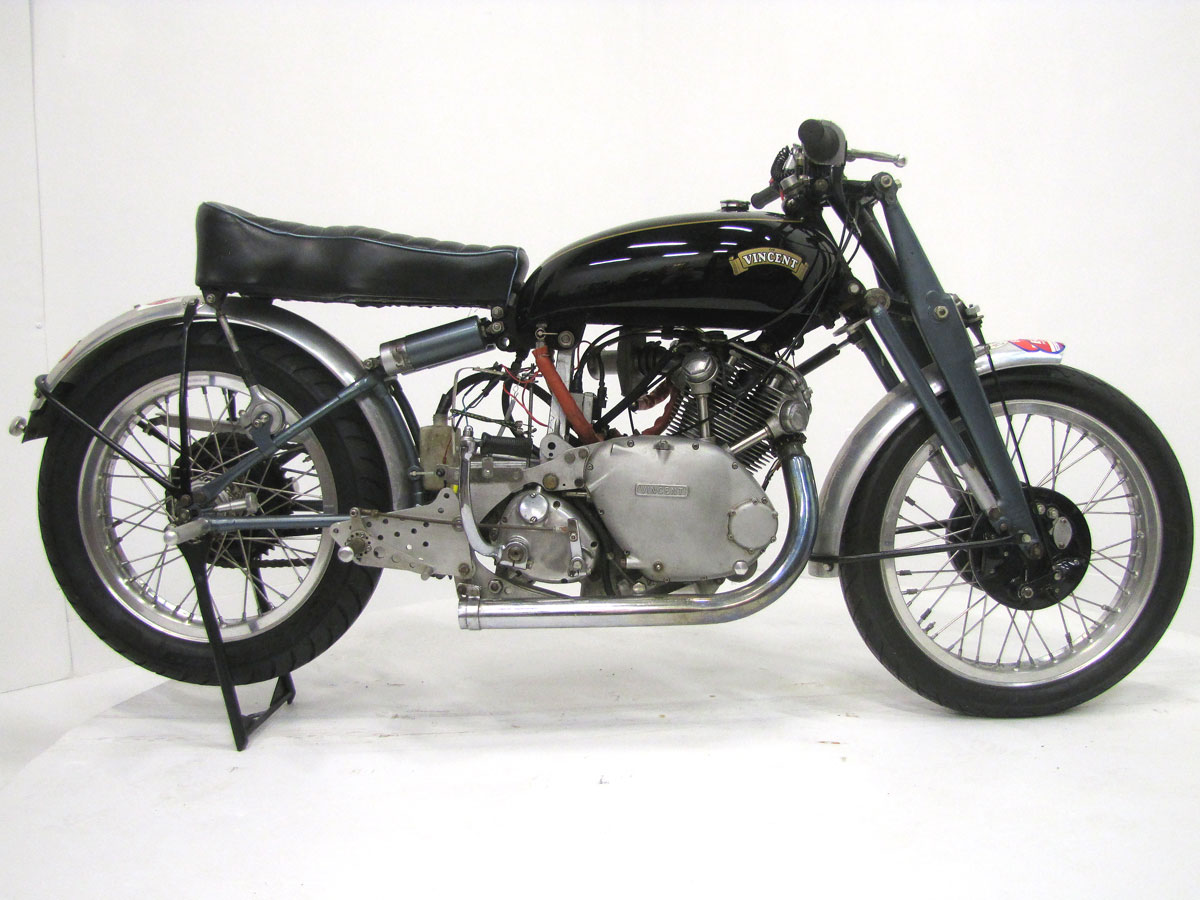 “Big Sid” Biberman had a reputation far and wide for building fast Vincents, mostly for drag racing. Truly a big guy at 6 foot 5 inches and around 300 pounds, he needed all the horsepower he could get. Over time, his racing career tapered off and he focused on the Vincati project, a father and son effort to install a Vincent Rapide engine in a 1970’s Ducati GT750 chassis; their favorite motor in an updated chassis.  With the Vincati very successfully completed, the next father and son effort was a building a land speed record Vincent, and competing for a Land Speed Record. Big Sid and Matthew Biberman used the leftover parts from the Vincati project to build a land speed record machine, a Vincent single they named “Tina”. Tina’s single-cylinder 500cc engine is from a 1950 Vincent Comet, and was extensively modified by Sid and Vincent performance expert Steve Hamel. Displacement was upped 20% to 598cc’s. The 1960’s era Gardner carb is interesting and apparently worked as well as contemporary magazine articles claimed. Numerous tuning and safety modifications have been made including rear-set controls to allow the rider to tuck in at high speeds, important on the salt, and insulated fuel lines to keep fuel cooler.

The considerable efforts of the father and son team paid off: Tina competed at the ECTA “Monster Mile” at Maxton, North Carolina in 2009 and set a record of 105.506 mph in the Modified Vintage Gas 650cc class. Tina’s best run to date occurred at the 2011 BUB meet at the Bonneville Salt Flats where she recorded a speed of 110.9 mph.  It was a great outing but not enough to secure the record then held by a BSA 650 twin with a speed of 116mph.  In addition to her record at Maxton, Tina also holds the ECTA 650cc M-VG class record for the Wilmington, Ohio race course with a speed of 102.420 (9/30/2012).  Unfortunately, with Sid’s death in 2013, Tina’s development came to an end.

Looking back at Tina’s race outings, Matthew has said, “We never achieved the full potential of the bike, but we set two records and always went home without any significant damage and smiles on our faces. Ultimately, that’s a success.” Tina is currently on display in the Museum. We contacted Matthew last week to tell him Tina was an upcoming Featured Bike. His comment, “Thinking about Tina on a cold winter’s day makes me think of its exhaust note, truly a thumper on an open pipe.”

Tina is one of half a dozen Vincents on display at the National Motorcycle Museum, stock and built for racing. The Vincati, built by Sid and Matthew, is also on loan and you can see the fine workmanship on this surprising engine swap the next time you visit.