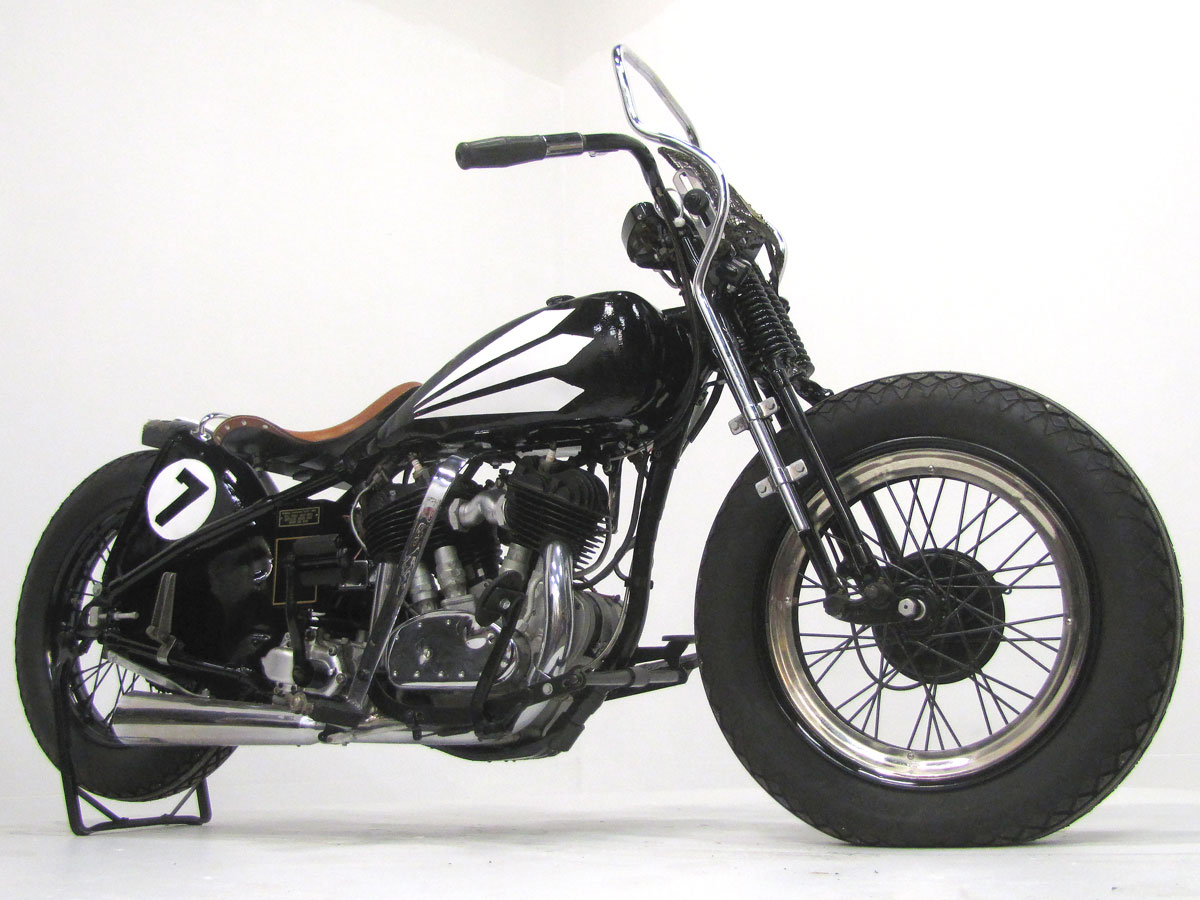 The December 7, 1948 Santa Clara, California newspaper, The Sportsman, featured stunt rider Jimmy Washburn on its front page as he was contracted to perform on a fair tour. It cites that Washburn rode a large circuit of events on his stripped down 1932 Harley-Davidson VL. By then Washburn had become an international crowd favorite and his stunt riding destinations included six states, Canada and “the land down under,” Australia.

Washburn began his stunt riding career in 1929 by crashing through a flaming board wall as part of an auto racing event at Alum Rock Speedway in California. The newspaper article gives a good history on Jimmy and says he performed at Chicago and New York World’s fairs in the era and won the International Congress of Dare Devils at St Louis in 1933 and 1934 by, “Hurtling through mid air on his motorcycle over eight sedan cars, a stupendous leap of 65 feet through space, being 15 feet above the ground at the highest point.”  Cyclemania and Crash Donovan were two MGM films Washburn is featured in. His wife Vi was part of some of his acts which involved him riding blind folded, or hooded, “up a narrow ramp…and leaps the heavy machine over his prone wife.” That stunt ended when a bad plank broke, but Vi suffered no injuries. Washburn’s stunts also included riding the VL through a flaming 25 foot long tunnel, fueled by ”Twenty gallons of high octane Ethyl gasoline…” Washburn’s career lasted into the 1950’s but according to his son, ended in a burning car stunt at San Jose Drag Strip in the mid-1950’s. Washburn was to drive a gasoline doused car, with a bomb in the trunk, down the strip. Unfortunately, some fuel landed on him and he sustained second and third degree burns and had skin grafts, spent a lot of time in the hospital. Luckily, the bomb did not detonate. Stunt riders like Washburn and often sustained serious injury, possibly part of our fascination with their riding, their careers. 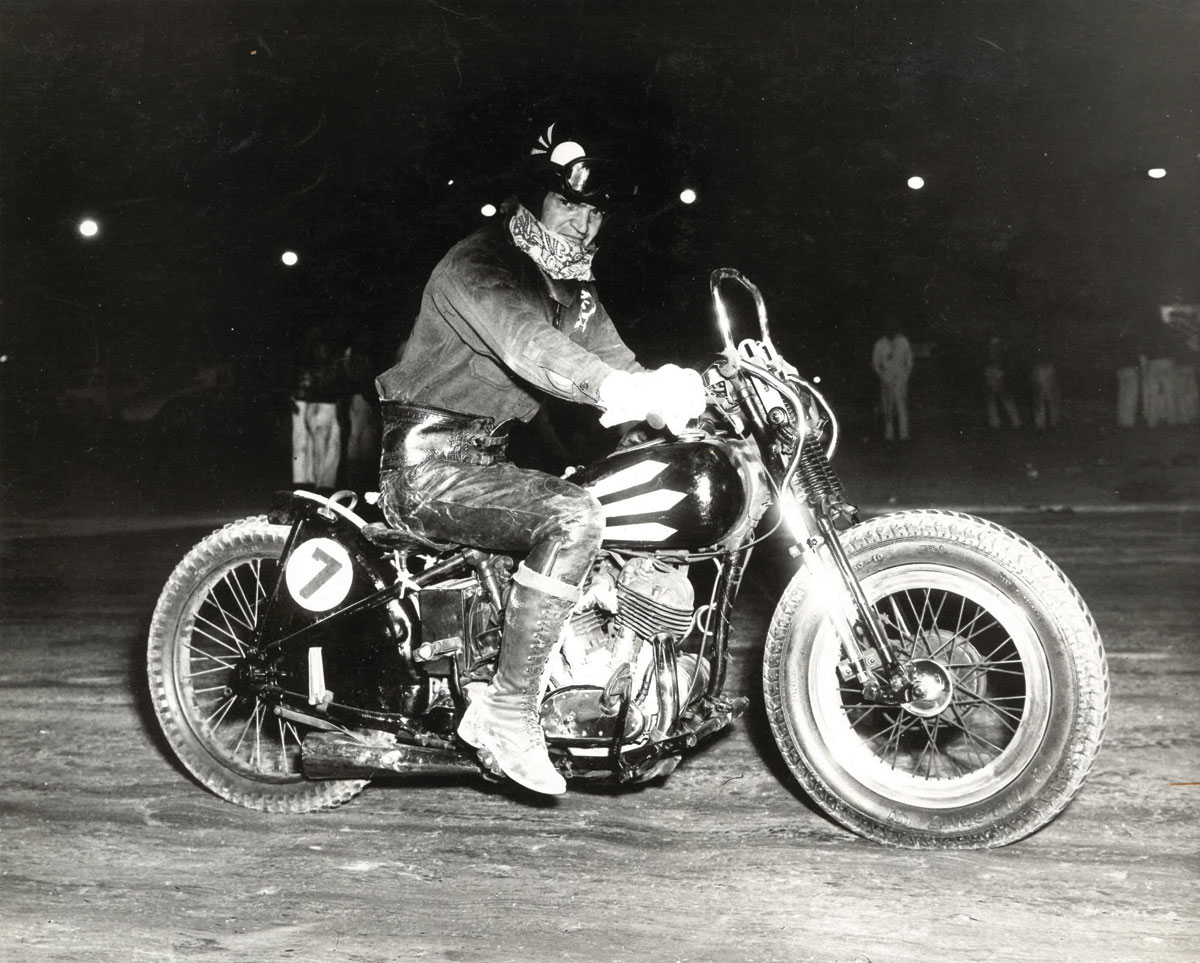 John Parham bought not only Washburn’s VL Harley stunt bike at auction about six years ago, but also trophies, photos and even a ledger in which Washburn recorded his performance expenses. His promotional expenses like programs, ads and banners, but also lumber for his flaming walls, also ushers, concessionaires and others who played a role in the stunts are among entries. While motorcycles can survive the times, it is rare to find so much of a stunt rider’s history through memorabilia and artifacts as his family have kept with Washburn’s bike.

While the most interesting thing about this Harley VL is its stunt riding history, before it was stripped down for shows it was a typical VL, the model that followed the successful “J” models. You can see quite a few modifications Washburn made to the bike including the chrome plated tubular shield that probably helped him crash through burning board walls. Foot board are replaced with pedals, the back fender bobbed and the sharp edge protected by reinforced rubber, a crisp lucky “7″ painted on number plates.

The Museum honors stunt riders with other displays including The Women on the Wall of Death exhibit created about ten years ago is also here for you to study: Sandra D, Cookie Crum, Viola Pelaquin, Dotti Moss and Samantha Morgan were among a few dozen risk taking female Wall of Death riders who thrilled crowds for a century.

And here’s a little information on Harley-Davidson VLs, one of the Motor Company’s finest machines. The first Harley-Davidson VL’s appeared mid-year in 1929. Unfortunately this was two months before the stock market crash and the new motorcycles had a few mechanical problems. The engine is a true flathead, otherwise known as a “side-valve,” an improvement over the J as was its new frame. Here and abroad the 1930’s were tough times and soon after release of the V models bikes sales declined to their lowest in 20 years. With Harley-Davidson low on funds there was more focus on paint and graphics than further technical improvement, and the V models were beautiful machines. But keep in mind that the landmark OHV twin also hit in 1936, the 61 cubic inch “EL” we now call the Knucklehead. With great optimism, no doubt, the Knucklehead was developed in the Depression era.

Harley’s first V-Twin came out in 1909 and set a path the Motor Company would stick to for as long as they made motorcycles; the 45 degree V-Twin, exceptions being the 60 degree V-Rod and VR1000 road racer. Compared to the J Model, the VL offered some new features, but weighed almost 100 pounds more. New gasket technology offered detachable cylinder heads, there were interchangeable wheels and bigger brakes. The VL also offered a lower seat and more ground clearance. The V produced 28 horsepower, the higher compression VL pumped out 30, the VLH about 34 horsepower. Lubrication remained total-loss. The new fork was a forged “I-Beam” design with “Ride Control” friction damping, battery and magneto versions of the V and VL were available.

Jimmy Washburn’s Harley-Davidson and related memorabilia are part of the Jill and John Parham Collection.

1998 Pumkun by the Late Don Hotop Scroll to top