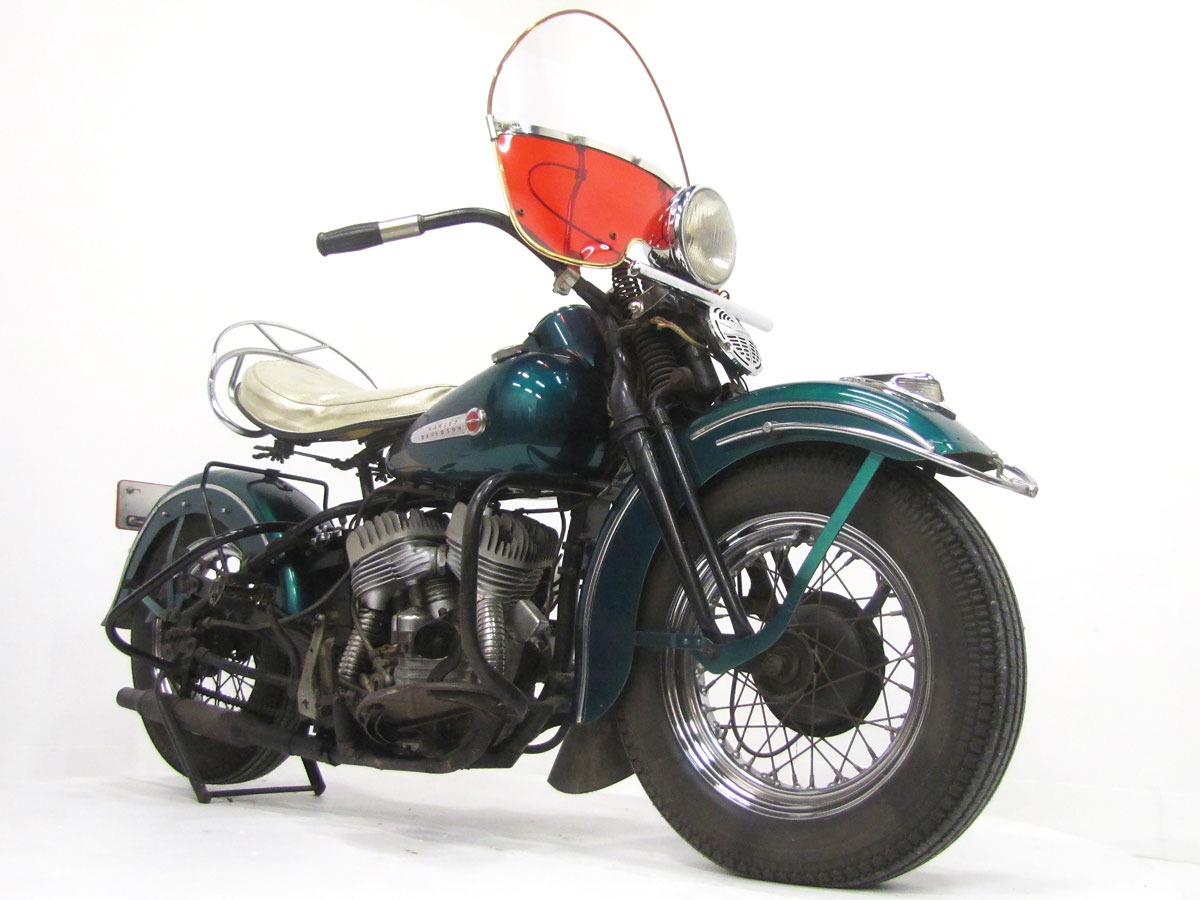 While using a slightly lower tech design than the 61 cubic inch OHV EL, the “flathead” WL 45 was the backbone of Harley’s lineup. Not only did it serve well as a courier machine with tens of thousands manufactured for World War II, but also in numerous two and three-wheeled versions. And it was the mount of choice for many police departments. The WL series also enjoyed great commercial service and was the basis of a machine for the 750cc, 45 cubic inch Class C racing series which AMA launched in 1934; the Harley-Davidson WR.

For comparison, the WL is the basic model, with the sportier WLD, which used a higher compression ratio, referred to as the Special Sport Solo. Wheel sizes, styling and trim were nearly identical to the “big twin” EL and later FL, but the scaled down WL’s have a shorter wheelbase and less weight which offered more nimble handling. This machine has been painted a special non-stock color, treated to chrome wheels and light bar, a windshield, crash bar, fender guard and a later buddy seat with grab rail.

Ending a long and venerable heritage, the WL model was discontinued, though WL engine production continued through 1973 for the three-wheeled Servi-Car. Competing better with British offerings, the 1952 K Model was Harley’s first production machine with rear suspension with the big twins following in 1958.

When you visit the National Motorcycle Museum you can see this personalized 1949 WL on loan to the National Motorcycle Museum from Clyde Zedick. But there is also a second 1949 WL in red on loan from the Antique Motorcycle Foundation that’s a bit closer to stock trim. There are also 65-plus other machines helping to tell the history of Harley-Davidson. Harleys on display range from a 1909 single to a great 2003 100th Anniversary CVO Road King donated by Bill Philben. In addition there are hundreds of posters, prints, photographs and advertising materials, plus apparel, signage, parts and packaging all giving you a tremendous review of Harley-Davidson history.