Vincent Power, Ducati Handling in a Father and Son Project 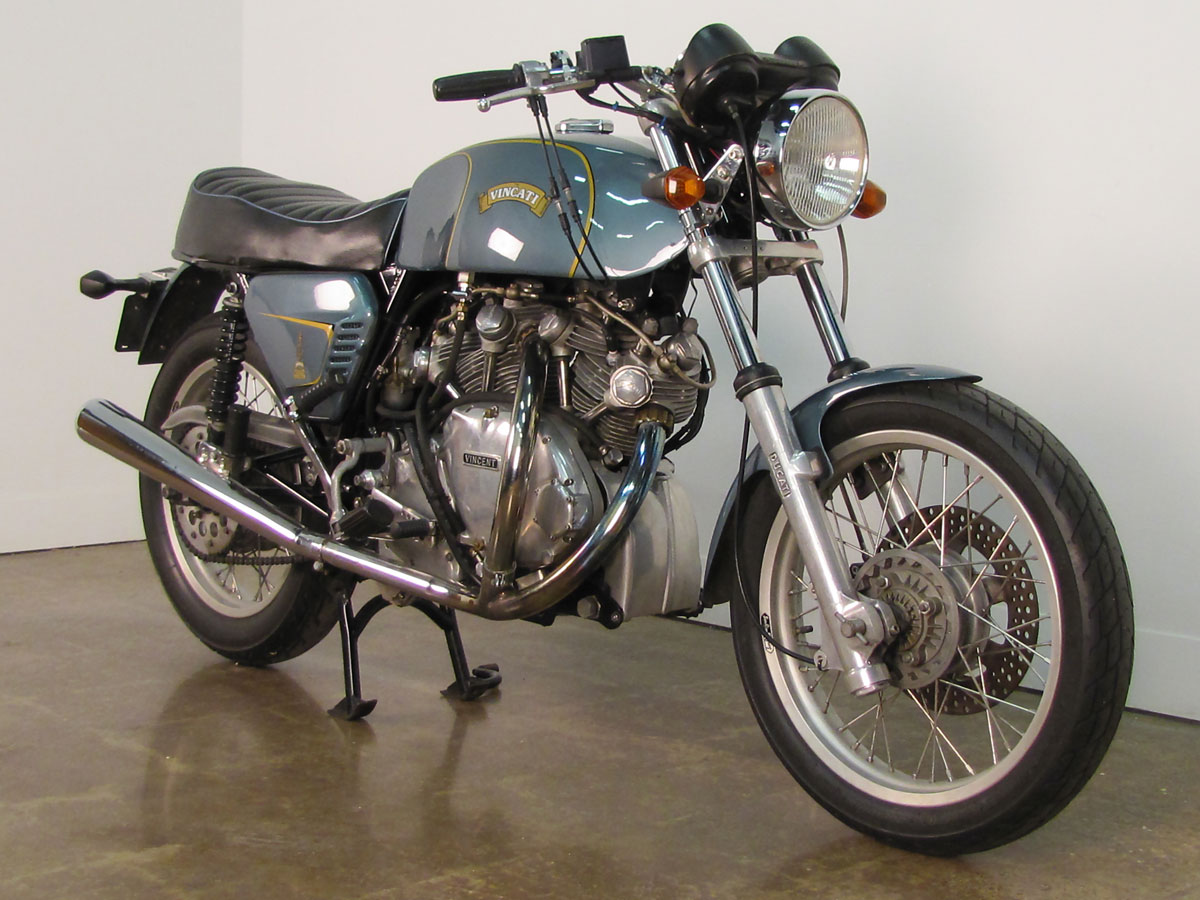 While most would consider Sid Biberman a highly skilled motorcycle technician, a tuner and drag bike builder and racer, he was also a savvy motorcycle design analyst. He could look at a motorcycle design and deduce whether it was something special or just another motorcycle. In his youth after tinkering with a Whizzer motorbike, then a Salsbury scooter, he discovered for himself, the Vincent.

Fully knowledgeable of American and British bike makers’ offerings in that era, Sid was impressed with the Vincent motor. It offered almost 1000cc’s, 35 to 50 percent more than other British bikes. And, it was designed to be a stressed member in the original Vincent design, essentially carrying the swing arm aft and the oil tank/steering head up front. Money was always tight for Sid, but after a time Sid owned a Vincent, drag raced it and tuned it to make plenty of horsepower. Sid and his Vincents, those of customers, became legend, tough to beat.

Time passed and another motorcycle came into Sid’s view one day, a 1972 Ducati 750GT. Sid knew of Ducatis, but till then they had been relatively small singles; Sid’s big 6′ 5″ frame needed a bigger machine, and now Ducati offered it. The 750 GT was also a 30 years newer design than the Vincent, had a telescopic fork and a real frame that had engineering roots in the fine Colin Seeley Matchless G50 design of the 1960s, yet vastly improved. Like many of us, he stopped by the local Ducati shop with some frequency peering through the window at the gold Ducati, lusting after it. Ducati won Imola with a race version in 1972; Sid had to have this bike.

When Sid bought and rode the GT, he began to realize the Vincent rolling chassis was arcane, and this new Ducati, even if down on power comparatively, was a dream on the winding roads near his home in Virginia. Could they be combined to make the perfect motorcycle, he wondered. He discovered that some tuners in Australia had anticipated his idea, installing a Vincent twin engine in a Ducati chassis. Sid’s dream was to build a Vincati.

By now, Sid was up in years, had suffered a heart attack, but this project drove him and his son to be better friends. And by this time son Matthew was an experienced Vincent guy, knew of the Vincati formula and was hot to engage with his dad to build his dream motorcycle. Says Matthew Biberman in a 2010 interview with BIKE EXIF, “In 2000, my dad, Big Sid, was recovering from a heart attack and bypass surgery. One evening during a hospital visit, I brought him his mail and we found ourselves poring over shots taken during that year’s Isle of Man races. One shot caught my eye: it was of a Vincati, something I had never seen before. I was immediately smitten and right then and there challenged Sid: I vowed that if he found the will to recover we would build one together, come hell or high water.

The stock Ducati frame is a double loop design, but as you see, those down tubes were cut away to accept the big Vincent motor. Large alloy engine mounting plates hold the engine, but also restore frame rigidity. The Ducati 750GT appearance is maintained down to the “dashboard” that holds tach and speedo and several indicator lamps; it’s a double-take motorcycle.

“The Vincati won Best Modern Café Racer at the AMA’s Annual Vintage Motorcycle Days meet in 2009, and was featured at the Barber Vintage Festival. It was a real thrill to start it for George Barber in his museum,” says Biberman. Sid and Matt’s Vincati is widely appreciated, and Matthew authored a book on his father, their relationship and the Vincati which sprang from their desire to work together and build the bike. The first edition of Big Sid’s Vincati, by Matthew Biberman, has sold out but copies are readily available on the resale market. Currently this father and son masterpiece is on display at the National Motorcycle Museum, along with Vincents, Ducatis, Whizzers and a Salsbury for review and comparison, over 450 motorcycles in all.