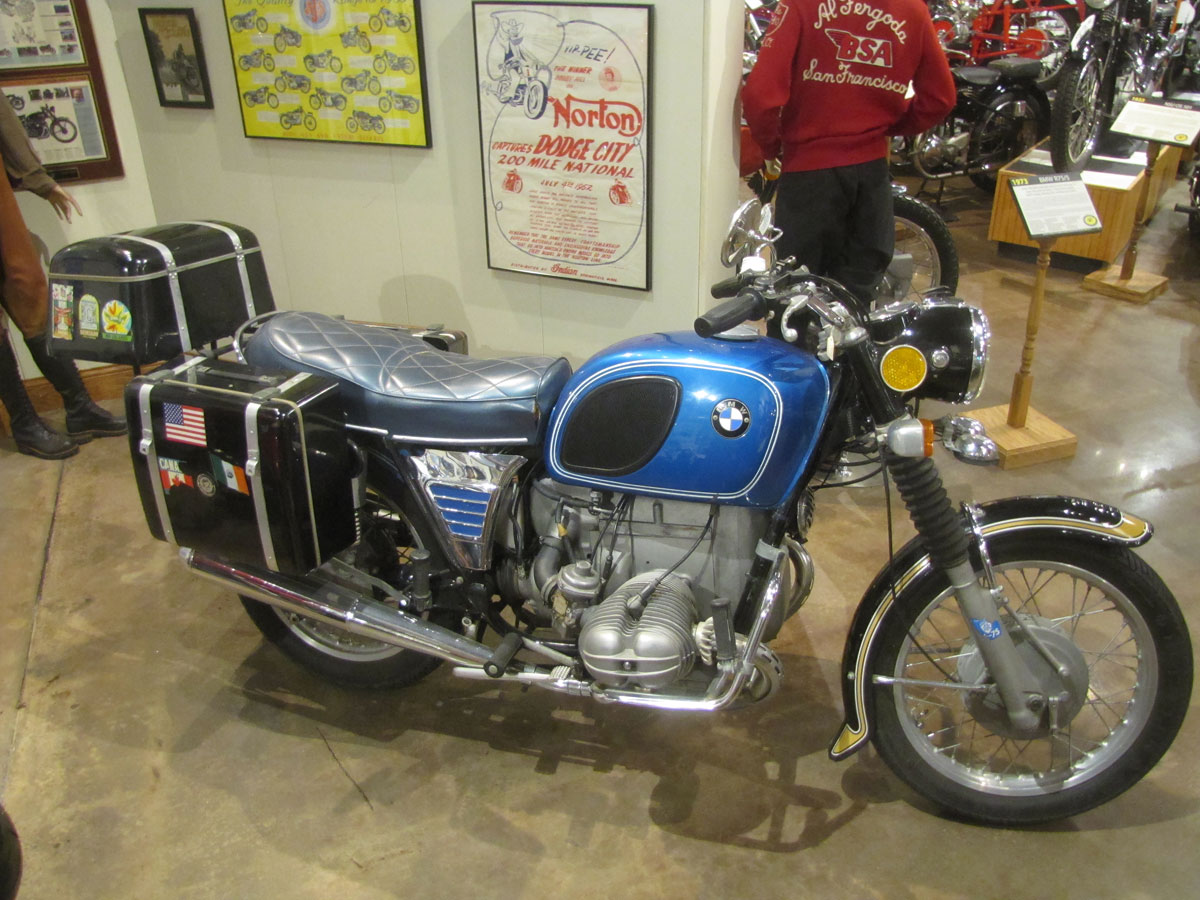 In late 1969 BMW modernized its boxer twins with the launch of the new “/5” (slash five) series with an all new frame, 12 volt electrical systems, electric starting, telescopic forks and better drum brakes. This particular BMW belonged to Cliff Boswell, pioneer touring motorcyclist, author of Two-Wheel Touring & Camping and one of the original inductees of the National Motorcycle Museum and Hall of Fame, then located in Sturgis, South Dakota.

The 1970’s began a period of quicker model changes for BMW as they were shifting away from their staid traditional appearance, the plunger rear suspension and Earles-style leading link forks then used on most models. BMW even experimented with lighter plastic fenders that helped get the weight of the new /5 down to about 460 pounds. But handling and high speed stability of the new /5 was less than perfect so BMW extended the swingarm in late 1973, then released the completely new /6 in 1974. The /6 was also the basis of the sportier, now highly sought after R90S.

Back in 1973, outside of maybe the Harley-Davidson Electra Glide, Honda or Kawasaki with their superlative fours, nobody made a machine as well suited for high speed touring and as reliable, easy to service as BMW. And BMWs have always been known for well designed luggage, saddlebags that are well mounted, water tight and easily accessed. The /5 might be considered the original “sport touring” bike.

Accessories on this R75/5 include the Craven panniers and tour pack, the Vetter “Rainy Day” front fender, safety bars, exhaust header shields, highway pegs, a pair of horns, plus a rebuilt seat. Boswell added the hooks to the saddlebags that allowed for strips of inner tube to be stretched over the top securing camping gear and other equipment. The fuel tank is not the typical chrome paneled “Toaster Tank” but an earlier design.

This classic BMW, donated by Cliff Boswell, is part of the collection of the National Motorcycle Museum and is on display with other European motorcycles.
Specifications: