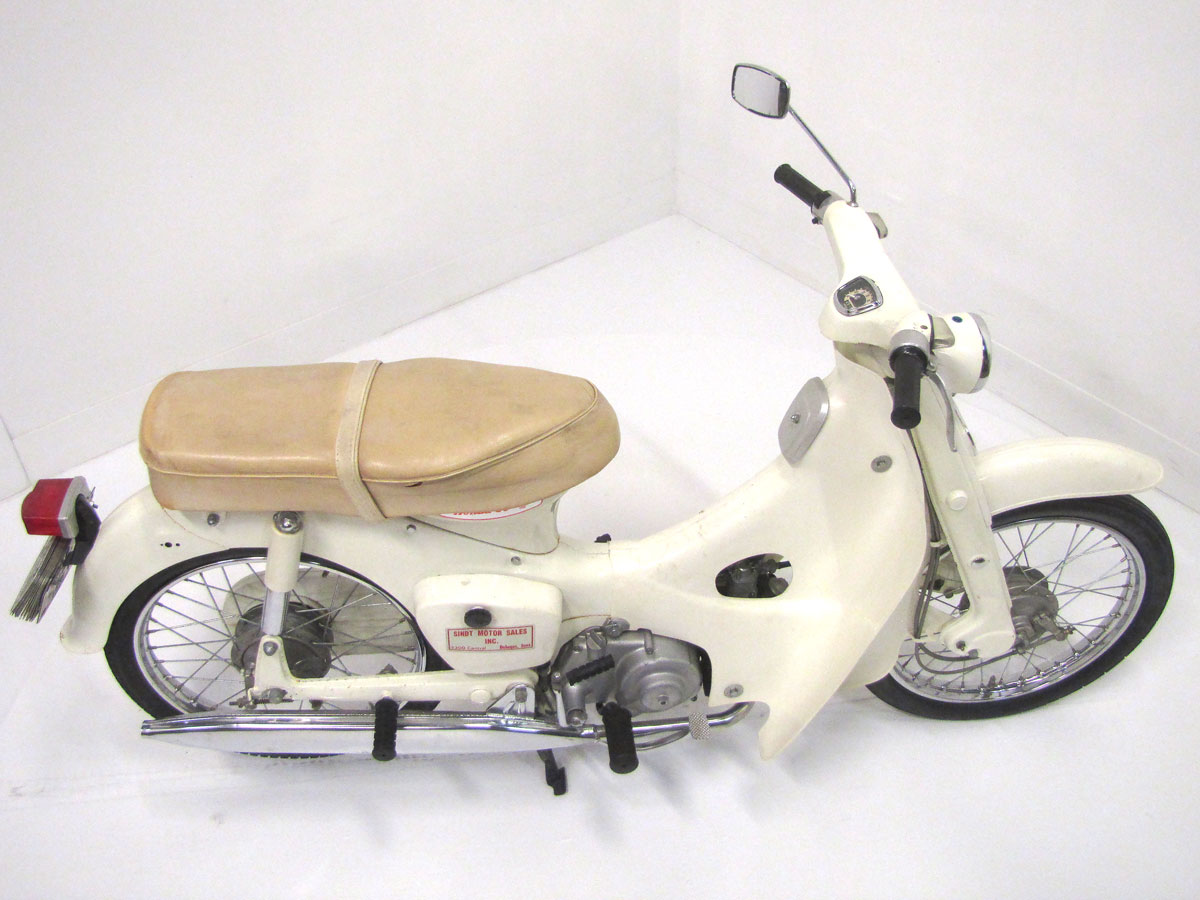 Practicality is what drove Soichiro Honda and Takeo Fujisawa to create the Honda 50. Mr. Honda was not above touring the world to see how others designed and manufactured their motorcycles. A trip to Germany in 1956, and review of scooters made there sparked an interest in the engineer/production man, Honda and his marketing man, Fujisawa.

Having started motorcycle production in 1949, this was about seven years later, and in a different direction from the first Hondas. By design, the new Honda had to fit the needs of those in developing countries, some who didn’t even know it was a motorcycle they needed for transportation, or for making commercial deliveries. The new motorcycle Honda envisioned would be small, light, simple to operate. It was also felt its mechanicals should be shrouded. Though using relatively large 17 inch wheels, the step-through scooter design was adopted, and a shield for the riders legs designed in.

The first small “sloper” engine was overhead cam though later versions like this one were pushrod OHV design. The primary was gear driven, the three-speed transmission semi-automatic. Operating the foot shift simultaneously released the clutch. Most of the 100,000,000 or so Honda 50s produced since 1959 are dual seat machines, but solo versions with a luggage rack offered more utility. Like many German machines, the final drive chain was fully enclosed. Some versions offered electric starting. Looking closely, a good bit of bodywork is “unbreakable” plastic. Most Honda 50s are red, but blue, black and white were also offered. This CA100 model, one of at least half a dozen versions, was made between 1962 and 1970 according to the Honda Motorcycle Identification Guide published in 1988.

While new larger lookalike versions of the Honda 50 came to market recently, taking styling cues and the core elements of the original machine from 60 years ago, the original with some updates is still manufactured in some parts of the world. That simple little motorcycle occasionally pops up in transportation-related stories and is cited as having the highest production numbers of any vehicle. It is also cited as a machine that put a fresh face on motorcycling, apparently making it more socially acceptable. Like the Ford Model T, it’s hard to know where motorcycling would be today without the timely genius and hard work of some inventive types that gave more people “wheels.”

This modest white Honda 50 is on display among some exciting and rare motorcycles like a Flying Merkel, several Vincents and Broughs, big Hondas like the six cylinder CBX plus racing motorcycles of all types. You can see them all on your next visit to the National Motorcycle Museum.