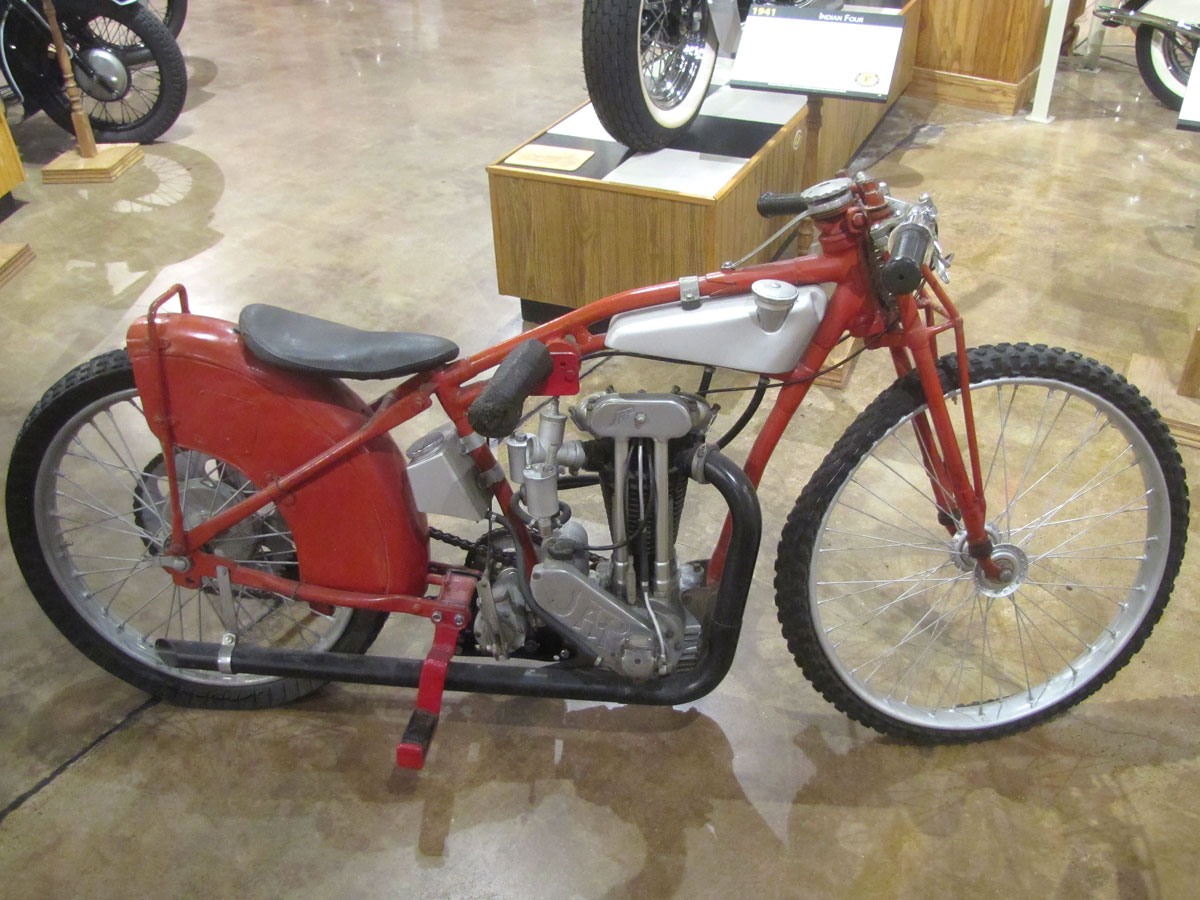 Speedway originated in the 1920s in England and Australia but soon came to America; some famous American board track and dirt track riders raced abroad. Like other sports it was a bit of a traveling show with promoters taking a group of riders and their bikes on the road, sometimes even overseas. Today there are a few pockets of speedway racing in America.

Speedway racing is a form of dirt track, but run on shorter oval course of around 900 to 1300 feet in length, less than a quarter mile. The racing is run counterclockwise like short track, half-mile and mile dirt track racing. The F.I.M. controls track design for internationally sanctioned speedway racing. Track layout, banking and the actual dirt and gravel medium are all controlled for safety and uniformity of competition. Tracks may be banked, but the slope can’t exceed 5% in the straight, 10% in the curves.

The bikes are very short wheelbase with steeply raked forks for the short turns. The racing is fast and furious and the bikes are sideways for most of the track. Four to six riders compete in a given heat or race. Much like Supercross, the event is compact and lends itself well to spectating as opposed to mile dirt track or road racing where riders are often out of view for parts of a lap.

Looking at this Rudge, the bikes are very simple designs, this one with a sourced J.A.Prestwich (J.A.P.) engine. It’s a 500cc AMAL carbureted, methanol burning four-stroke single, with magneto ignition, for power. Originally engines were vertical but more recently “sloper” designs have dropped the center of gravity improving handling.

As you can see on this Museum bike, chassis are a rigid design with minimal front suspension travel. The wrapped hook just aft of the tank is a grip for the rider’s knee. This engine was supplied by J. A. Prestwich a British engine builder that supplied many cycle car and motorcycle makers, even Brough. The carb is a dual remote float AMAL system as methanol is burned at a high rate. A magneto supplies the spark. The lower portion of the cylinder has short cooling fins as alcohol makes for cool running and racing for only a couple of minutes generates very little heat.

Much like American dirt track racing bikes, until the mid-1960’s, no brakes are employed and there is no typical transmission, just an in/out jackshaft and a hand operated clutch. Bikes must weight at least 170 pounds, about 1/3 of the average street bike. This early bike is pretty typical with a short 52 inch wheelbase. Wheels are an unusual 28 inch diameter running narrow 2.75 inch speedway specific knobbies. FIM even regulates handlebar width to less than 850mm, less than 34 inches. Riders launch with a flag or timing lights and never shift gears. With speeds up to 70mph on the short straights, a race is over in what seems like seconds.

This fairly original Rudge Speedway bike is from the Jill & John Parham collection. It’s one of only two speedway bikes on display at the National Motorcycle Museum.