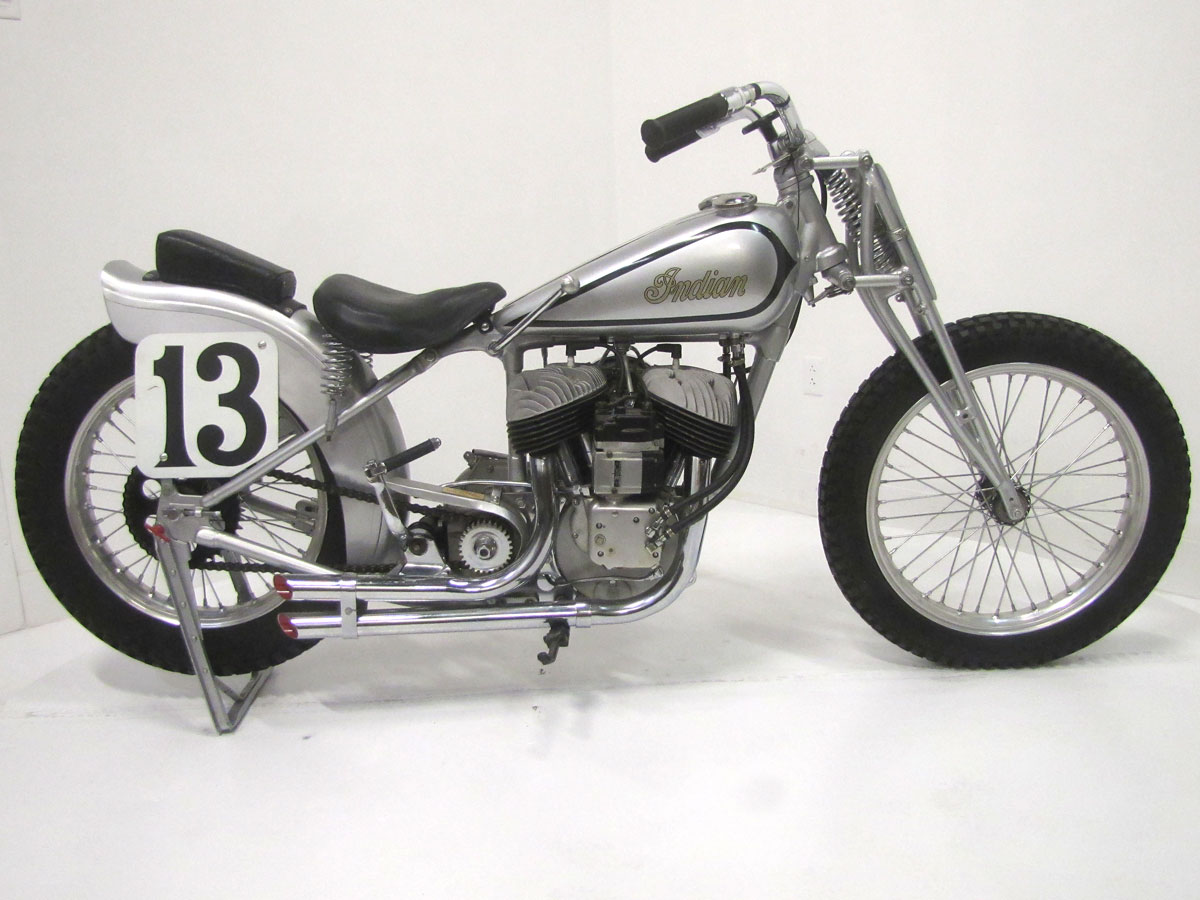 Indian Chief Engineer and Designer Charles B. Franklin’s Indian Scout, first introduced in 1919, has a strong history of both street riding and racing. Initially, the Scout had a 37 cubic inch 42 degree V-Twin with a gear primary. The motor was  mounted in a cradle frame. In 1927 a 45 cubic inch engine was introduced which greatly increased the Scout’s power.  In 1934 the Model 634 Sport Scout was introduced with a two-piece bolt-up rigid keystone frame and girder forks. The new frame also increased ground clearance and agility when compared to former Scouts. The Sport Scout became a very good AMA Class C race bike, winning many races. An aside, in 1922 as Indian’s big machine, the first Chief was produced based on the Scout.

This homebuilt racer consists of a fabricated keystone frame and many Model 741 Military Scout components. The front bottom frame casting appears to be from a Sport Scout, the rear frame is from a 1941 Model 741 as is the girder fork and the crankcase halves. The cylinders and heads are from 1940 and later Sport Scout, and the primary case appears to be Sport Scout. It was typical of post war era homebuilt racers using 741 cases to bore out the cases to take Sport Scout cylinders. The bottom ends are pretty much the same in both models. The net result of using these components is a bike of just under 45 cubic inches or 750 ccs, legal for AMA Class C racing. But typically a Class C bike would use “matched” components, a factory engine assembly. Note that AMA racing rules called for “brakeless” race bikes through the mid-1960’s, and down shifting was not permitted once the green flag dropped.

This fine racing Scout was restored by Ray Janelle 1992. The bike, a jacket, trophy and helmet came with the bike, now part of the Jill and John Parham Collection. A wide range of dirt track racers are displayed at the National Motorcycle Museum including a Harley-Davidson WR, an XR750, a KTM, a Yamaha, a BSA Gold Star and others, all near the Board Track Racing display at the Museum.

*AMA Class C racing was developed to use serial production, stock based, 45 cubic inch motorcycles avoiding the high costs of limited production race bikes.The class opened for racing in the 1934 season. Race bikes had to be owned by the person racing them and used pump gasoline.