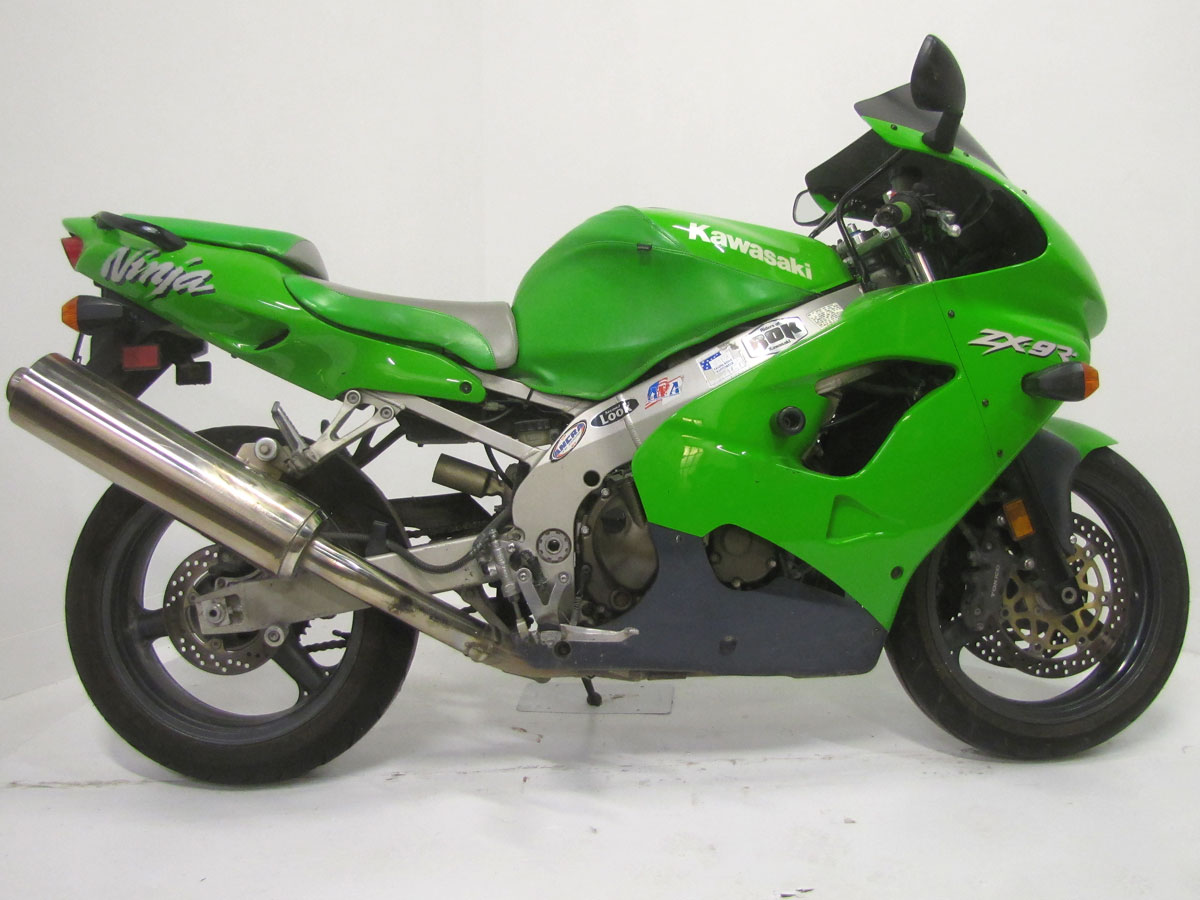 Now at 81 years of age, Willard Huedepohl started riding in 1971 when he bought a brand new Honda CB450. That was half his lifetime ago, when he was about 40. When he traded that Honda off he went through a series of Harleys, a Low Rider, an FXRT. He became a member of the Harley Owners Group, HOG, and became hooked on their mileage recognition program; you get recognition patches and stickers every 25,000 miles you ride.

When arthritis began to affect his riding Willard found that the sport bike riding position was actually more comfortable for him and he switched to a Kawasaki ZX7; a full on sport bike! Through his riding career, each time he parted with a bike he recorded the mileage on its odometer, the Honda, the Harleys and a series of Kawasakis. When he donated this ZX9R to the National Motorcycle Museum in 2018, the odometer had spun past 220,000.

Kawasaki’s first ZX7 came out in 1989. In race trim it was what riders like Scott Russell and Doug Chandler used to dominate AMA Superbike racing in the 1990’s. But for Willard, it was the first in a string of ZX7s and a ZX9 he used to conquer North America’s highways. With soft saddlebags and a duffel bag over the rear cowl, all the gear he needed for the road was at hand. He’s toured in all the Canadian provinces plus Nova Scotia and the Prince Edward Islands, and he’s been on roads in all 48 United States, all on a “sport bike crouch”  ZX Kawasaki of 750 or 900cc displacement. “The 900s have the pegs placed a little better than the ZX7s. Better for long distance,” says Willard. The ‘89 ZX7 was traded for a ’92, then a ’93, then in 1998 a ZX9R. “I kept all my bikes stock. My dealer did major service at 20,000 miles. I never had anything break on any of those Kawasakis.”

As for racking up the miles, Willard was a farmer and could control his hours. “Starting early, I’d farm through the day, then ride later in the day, maybe till midnight. Riding in Iowa and neighboring states, I tried to average about 500 miles a day that way.” And if you look closely at this ZX9 you can see the wear and tear. Willard lives in rural Iowa on a dirt road. (Iowa has thousands of miles of great, well maintained dirt roads.) But how many bikes, especially sport bikes make it to even 50,000 or 75,000 miles.

Maybe a stock lime green Kawasaki ZX9R is nothing special you’d go to a museum to see, but we think this bike and its owner are pretty exceptional. It’s one of a range of Japanese bikes you can take in, along with well over 500 other motorcycles and thousands of pieces of memorabilia. We thank Willard Huedepohl, an exceptional rider, for donating a bike with an exceptional story.