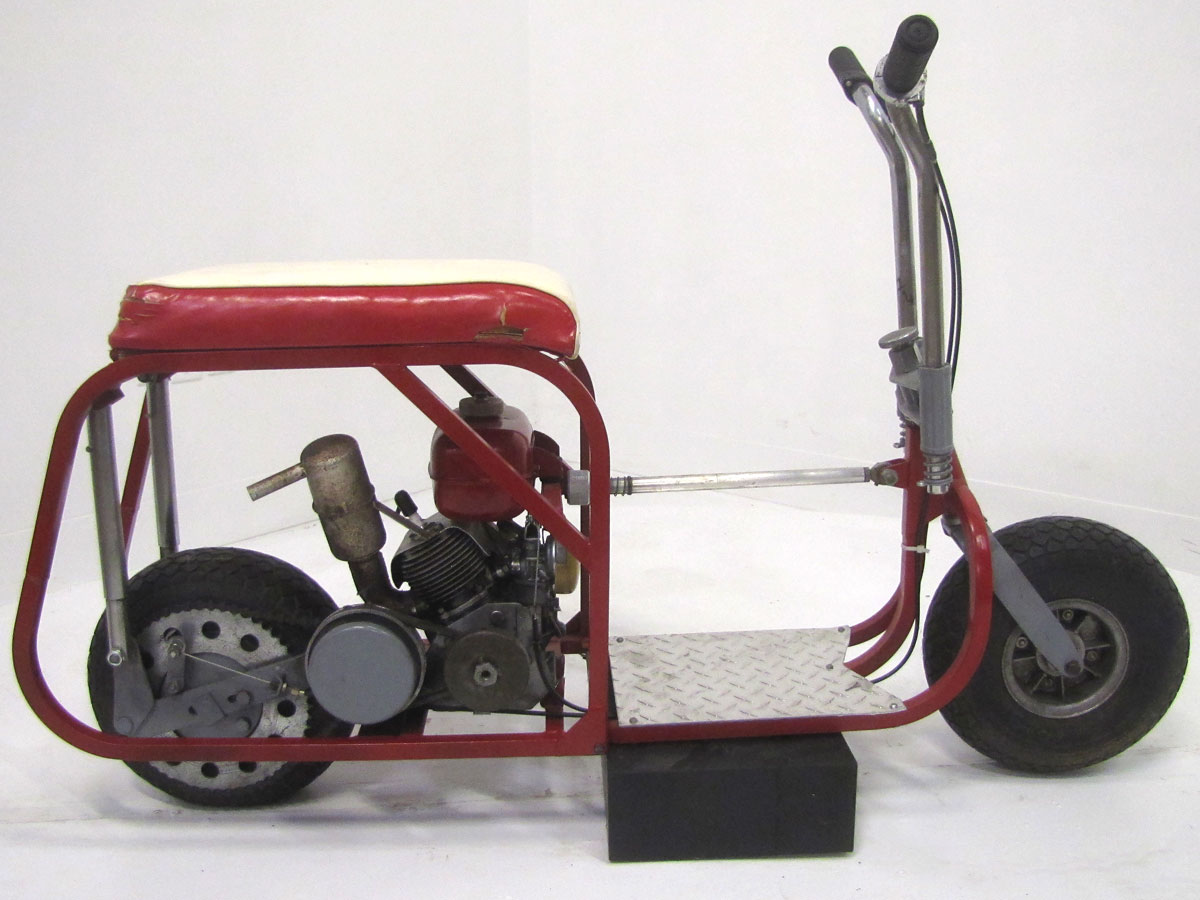 Contortionist, is what comes to mind when you view the Go Devil scooter in its folded, collapsed, car trunk-ready condition. When folded, the Go Devil is even more compact than the Indian Papoose featured here recently. Released by Fuji Heavy Industries in 1964, it even came with a soft carry bag with a handle. But is it a scooter, or a minibike?

The recoil rope start 50cc two-stroke engine drives through a centrifugal clutch, a Salsbury-type belt variable speed drive on a jackshaft and chain final drive. Wheels are five inch at the rim, four inches wide. A handlebar lever operated rear drum brake is offered. The chassis is made from bent square section steel tubing and bar stock. Components are painted or zinc plated. The swingarm rear suspension works through a pair of trick chrome plated shocks and folds into the frame, the fork pulls out and handlebars fold down. The front fork is rigid. A practiced owner, it is said, could collapse the Go Devil in under a minute, bag it and place it in checked luggage for flight, or into a car trunk. Folded dimensions are about 24 x 12 and 17 inches high.

In this same era, we enjoyed the products of Fox and Rupp who made a range of mini-bikes, both simple and more sophisticated, and magazines offered plans and kits for do-it-yourselfers. In the early 1960s, Honda offered the Monkey mini-bikes in Japan and later the Mini-Trail 50 for America. There is a strong resurgence of these machines, but now in a “modern” 50% larger, super-sized form, street legal and considerable more expensive but built with useful amenities. But the Go Devil has the functional advantage of being “step through,” like modern scooters as well as many Japanese motorcycles like the C100 Honda, the Honda 50. So maybe the Go Devil is more scooter than mini-bike.

Among Japan’s large auto-makers is Subaru, but the parent company Fuji Heavy Industries traces its roots to aircraft manufacture. Government driven restructuring brought about FHI in 1953 and the focus was a wide range of transportation manufacturing. Into the 1980s and most of production was automobiles, some aviation with partial ownership from time to time by other major players in the Japanese and American auto industry.

The Go Devil is one of numerous scooters, power cycles and mini-bikes on display at the National Motorcycle Museum, including a Salsbury scooter, the origin of the Go Devil’s drive system. The Salsbury and the Go Devil are from the Jill & John Parham Collection.