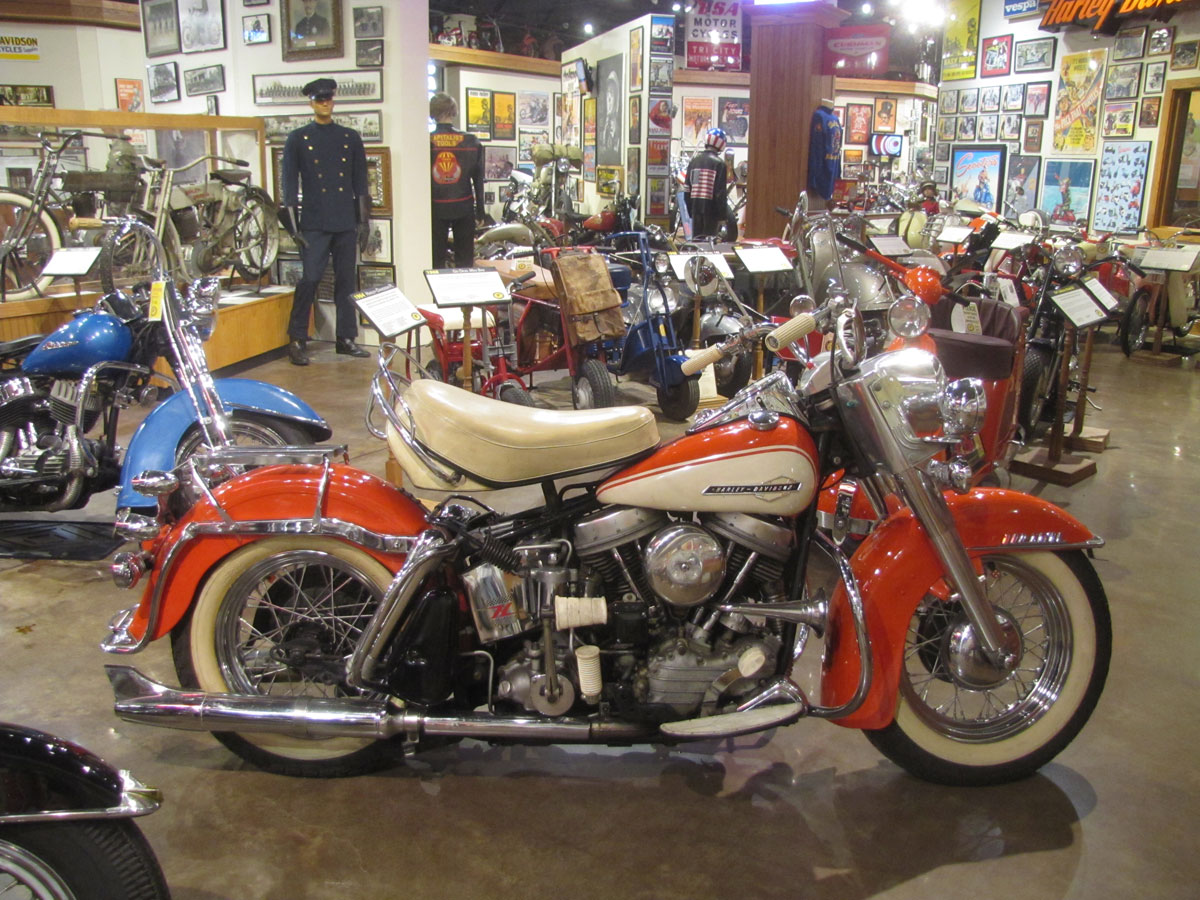 The 1964 Big Twin “Panhead” was the result of continuous upgrades but few significant changes over previous models since rear suspension came available in 1958. 1964 was the last year for the Duo-Glide as 1965 harkened the introduction of the Electra-Glide, a similar machine now with electric starting built on a new 12 volt system. A new two-tone tank panel encompassed the tank emblem. A primary chain oiler and new oil pressure switch were designed in. Ignition and headstock lock keys became non-matching. The Duo-Glide Jiffy Stand had added contact area. For 1958 the FL and EL big twins had become Duo-Glides, boldly noted on the front fender.

This Duo-Glide is especially stylish in orange and off-white, possibly Competition Orange and Birch White. I could not confirm this color combination as a “stock” offering for 1964, but with white floorboards, grips, kicker pedal, pegs and fringed seat, whitewalls yet leaner with no saddlebags it’s a winner. Maybe a reader will give us more information. Continuing to give serious touring riders what they wanted, the optional King of the Highway package offered saddlebags, dual exhaust, fender tips, bumpers and either the Deluxe Buddy or Solo seat plus a luggage rack. As before, the “helper springs” flipped forward under the seat to provide extra support for a passenger, folded down for solo riding. In this era about 3500 FL’s and EL’s were produced annually.

For reference, the 1958 machine received other updates including a hydraulic rear brake, an improved transmission and clutch, better connections for the exhaust headers at the head plus optional white-wall tires. The chrome struts, already a design feature on the K Model and Sportster became an element of the big twin as well supporting the rear fender and taillight. The rear fender remained hinged to allow for rear wheel service.

Although still available for sidecar use in 1949, 1948 was the last year the solo FL and EL Harley’s used the springer fork. The 1949 model was dubbed the Hydra-Glide and introduced the clean, sleek hydraulic fork with, in just the first year, gloss black-painted lowers. After ten model seasons rear suspension was added, and the big twin became the Duo-Glide but the big sprung seat, a tradition for comfort, was retained.

This sharp 1964 Duo-Glide is one of over 60 Harleys at the National Motorcycle Museum and is part of the Jill and John Parham Collection.