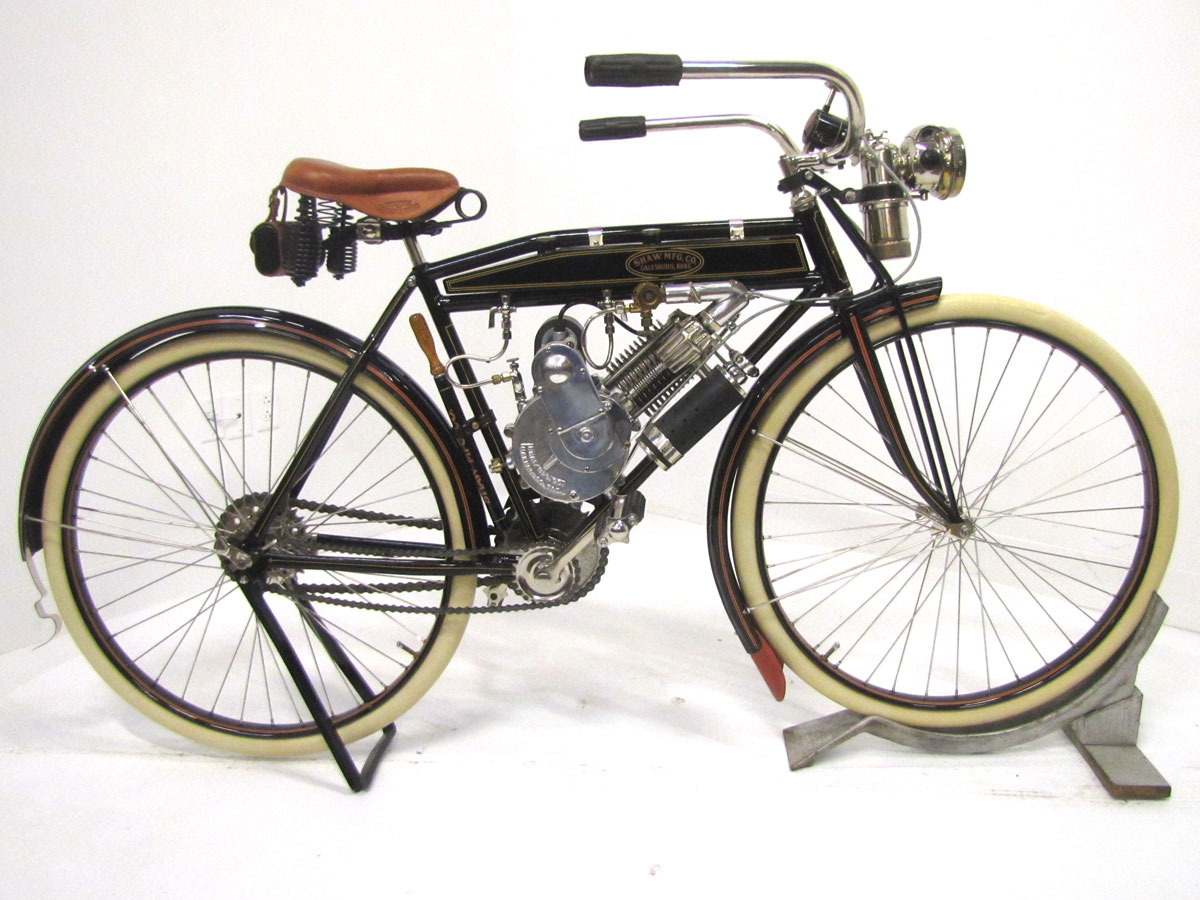 Contemporary to William S. Harley, Walter, Arthur and William A. Davidson, Hende and Hedstrom was W. Shaw of Galesburg, Kansas. Over a period of  nearly 60 years beginning about 1903 Shaw used his company’s manufacturing skills and capacity to make everything from engines to cycle cars, then garden tractors. Attached engines, then complete power cycles, then a two passenger automobile, a cycle car. From about 1917 to 1962 it was agriculture related tractor-attached equipment plus the gradually developed Shaw Du-All garden tractors. Military contracts during World War II were of course part of Shaw’s good works. Kicking off his manufacturing, Shaw bought out the Kokomo Motorcycle Company in 1911 for its tooling, moved production west to Galesburg, Kansas.

This gorgeous Shaw is from very late, near the end of production of complete assembled machines in 1917. The power cycle appears to be a full restoration but the engine was never installed; it’s NOS though certainly highly polished, until recently never used.

We marvel at all the technological advances brought into our lives in the past 25 years; cell phones which are also cameras and handheld computers that can map a route, too. The light emitting diode lamps, or LEDs, which use very little electricity, last up to ten years yet are bright and even variable in color. We have digital printers that closely mimic the finest oil paintings  But think about life before the electric motor, the gasoline engine, the steam engine, the knowledge of petroleum refining to make gasoline and advances in medicine which all took place in the 1800’s.

So about as soon as the bicycle became popular two wheeled transportation in the 1820’s, it faded out. It became popular again about 1885, concurrent with Daimler’s prototype motorcycle, the Einspur. So we see how brilliant, inventive minds and good marketing brought together the two-wheeler and a few solutions for adding a power-plant to it, making it easier to go some distance. Would it be steam, gasoline, maybe electric? But the development paths split and you had enhanced powered bicycles, like this Shaw, a power-cycle, which came a bit later, as well as more stoutly built, purpose built designs, designed ground up as motorcycles. In the late 1890s this really took off with the most notable work in America coming from Indian Motocycle Company, 1901, and Harley-Davidson Motor Company, 1903/1904.

This fine Shaw Power Cycle is displayed with its forbearers, bicycles, at the National Motorcycle Museum. You can look over this Shaw, then walk over to the Harley-Davidson display area, or compare the Shaw to early Indians other early singles displayed at the Museum, some in the Early American Transportation INNOVATION exhibit. This Shaw is on loan from the Jill & John Parham Collection.