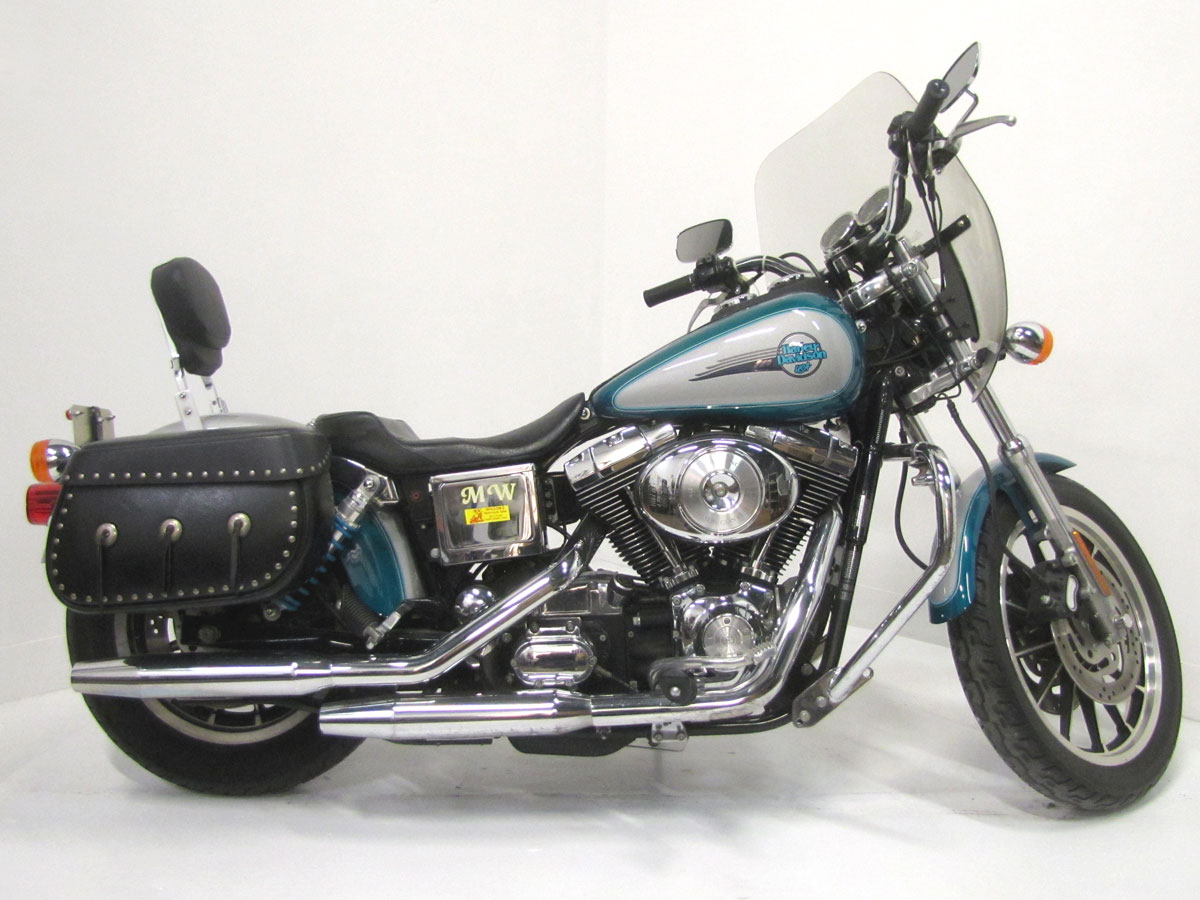 If you study this very sharp 2000 model year Harley-Davidson FXDL a bit, you’ll see a few things different. Most are related to Mike Wilson’s efforts to fit the bike to his diminutive wife, Margaret who was probably under five feet tall. The rear suspension is lowered with aftermarket adjustable shock absorbers. Fork tubes are pushed up in the triple tree almost two inches. The seat is custom and has no more than an inch and a half of foam. The bike is closer to the ground so Margaret could reach, center of gravity lower as well. The windscreen kept Margaret out of the wind and bug free. Saddle bags allowed for a rain-suit and some changes of gear, gloves and such. Her initials are bold on the side of the machine.

The Harley-Davidson Dyna series essentially replaced the all the FXR models except for the FXR Super Glide and the FXR chassis was discontinued, temporarily. The FXDL  was first offered in 1993. The Dyna served as the standard cruiser, neither Sportster nimble or FL touring weight; the in between machine. By the mid-1990s 1/3 of Harleys produced were FXs. The original Low Rider, launched in 1977 was still a strong design almost 25 years later. It was a good platform for customization and worked fine for long rides as well. Low riding was a good fit for the diminutive Margaret Wilson, and Mike’s modifications made it even better.

Margaret rode this solo bike to many annual Motor Maid Conventions as well as touring to rallies across America. Her other vehicle was a red 1990’s Pontiac Firebird. Sometimes if Mike was flying cross country at aircraft speed, Margaret would be down below, flying low in her Firebird. Then they’d meet up at an airport for fuel, ultimately at one hosting an historical aviation event. In World War II, Mike Wilson was a fighter pilot, later a lifelong historic aircraft mechanic and loved his Ryan trainer.  Late in life, at 83 years of age, he was the first to make a “touch and go” with Glacier Girl, the P38 that he helped to restore after its fifty years under the ice in Greenland.

Mike and Margaret owned a Harley-Davidson dealership in Cedar Rapids, Iowa, Wilson’s Motorcycle Sales, later added Honda to the mix so they had fairly new machines to ride if they wanted. But in most cases they were happier to see just how far they could run a machine. Most marveled at Mike’s ability to keep a bike looking sharp even after tens of thousands of miles. Margaret and Mike gave their time and resources tirelessly to museums preserving history of motorcycling and aviation and an exhibit area in the National Motorcycle Museum is dedicated to them.