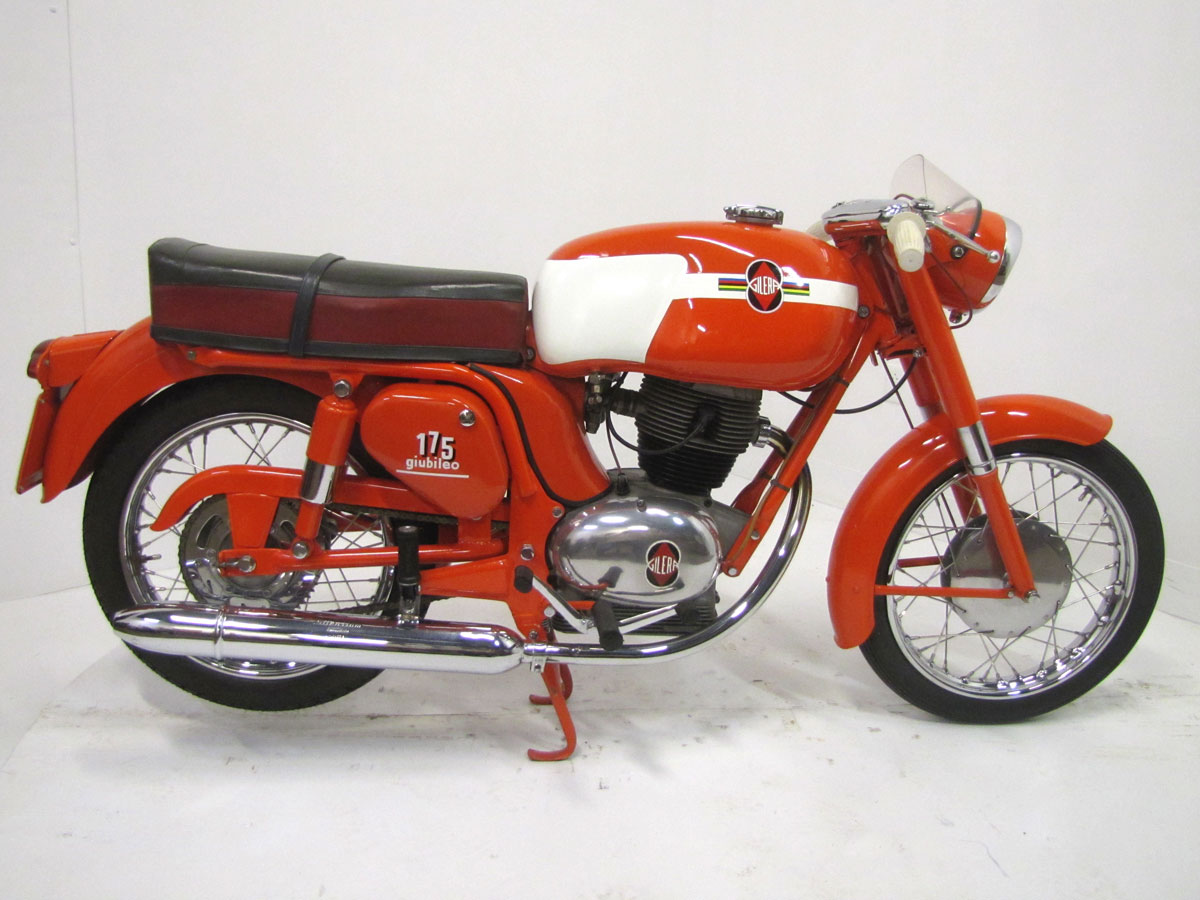 Gilera was formed in the early 1900’s in northern Italy, their first bike being designed by Giuseppe Gilera in 1909. By the mid-1930’s, some engineering sophistication came to the marque with overhead valves, a true advancement. While in America side-valve singles and V-twins dominated the roads and race tracks, Gilera had developed their supercharged in-line four dubbed the Rondine. In 1937 the Rondine, rated at 60 horsepower, was used to set a record for the “flying kilometer” at 274 km/hour, or 170 mph, a record that stood for 20 years. After World War II and the revival of manufacturing and racing, the new four-cylinder 500cc Gilera motorcycles dominated the MotoGP World Championship. They were the stars of race track battles with Norton, Moto Guzzi and MV Agusta. Impressively, Gilera won six motorcycle rider titles between 1950 and 1957.

Though Gilera was always regarded as a company producing world championship racing machines, it’s the simpler machines like this 175 Giubileo, production starting in 1964, “Giubileo” meaning Jubilee, that were the company’s mainstay. This type of motorcycle is what most Italians and other Europeans rode. A lightweight single with overhead valves easy to maneuver in towns and cities, it’s very conventional in design. The tubular frame bolts up to the front and rear of the engine, making the engine a stressed member. Fenders are very much full coverage, bars are low as preferred in Europe and seating is for two. Engine cases are rounded, classic in form, and the sump is a nice finned design. Suspension components are fully covered and mechanicals behind the engine are nicely shrouded as well. As with other Italian machines of the time from MV Agusta, Parilla and Ducati, we didn’t see many Italian bikes in America in this era largely due to a relatively high price. Yet those seeking something different or perhaps interested in racing sought them out at smaller specialty dealers mostly on our coasts.

In spite of successes earlier in the century, after falling into receivership, in 1969, Gilera became part of the Piaggio group. In 1992, Gilera made a return to the Grand Prix arena. Piaggio continues to produce small-displacement motorcycles with the Gilera name. The famous factory of Arcore near Milan, Italy was closed in 1993 and now the scooters bearing the name Gilera are produced by Piaggio in Pontedera.