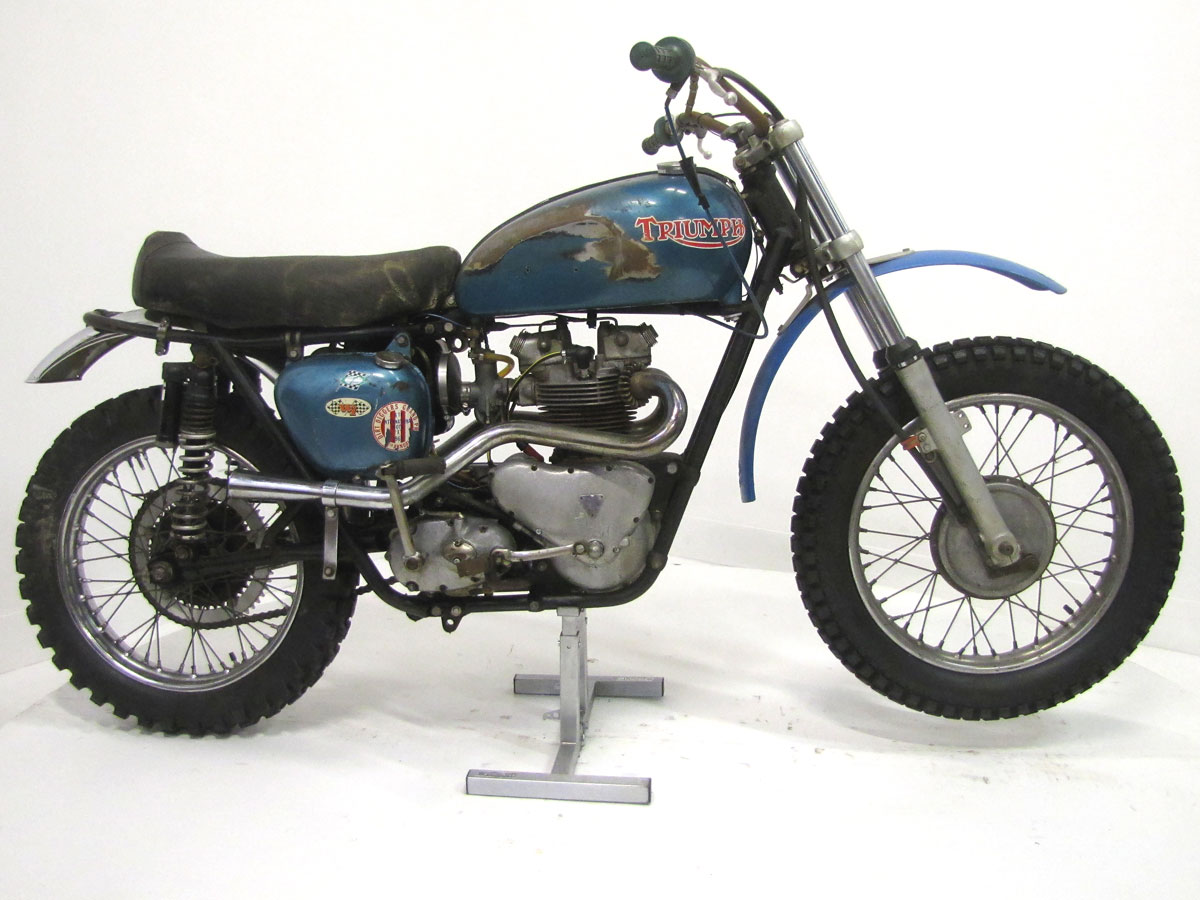 Ed Vanaman is a big fan of Italian, German and British bikes. Most bikes in his collection are high quality restorations but a few are in original condition. Always following tips, advertising and auctions Ed came across this great old Triumph, a fairly rare TR6SS. “To find a genuine desert sled with history and all the correct parts, I thought I’d found the Holy Grail of desert sleds.  All the original parts taken off it when it was new were packed in cosmoline and they came with it.” Fans of this niche in motorcycle racing are today building “period replicas.” But Ed found the real deal, intact. “I got it running and took it out for its first run in probably 40 years. It ran really strong and spun the rear tire on the rim which made it go flat and almost threw me off.”

This TR6SS was purchased new by Jim Peterson, president of the “Dirt Diggers” Motorcycle Club, AMA District 37, a very old Southern California off-road club. Jim says he converted it to a Desert Sled as soon as he got it, and that it has the first set of Ceriani’s shipped to California.  Jim added the Q air filter, Bates seat, Bates shocks, folding foot pegs, built the motor for racing, creating an off-road racer known as a Desert Sled. The TR6 was part of the Dirt Riding USA exhibition at the museum a few years ago, but Ed decided to keep the bike in the Museum a little longer. How did the desert sled as a form come about?

Though enduro competition was held all over the United States, back east events were run through woods in the hills with stream crossings and tough, often muddy hills. Handlebars were trimmed at the ends to afford better clearance around trees. Out west the terrain most interesting and available for racing was through scrubby desert areas. Before there were precision lightweight two-stroke bikes like Husqvarnas and Bultacos, large British twins were the machines of choice; the sandy courses like Baja called for big torque. Back when Steve McQueen participated in a variety of off-road events in southern California, he and Petersen were entrants in an Elsinore Grand Prix race, an important SoCal event begun in the late 1960’s.

Just about any Triumph or BSA twin could be modified to become a “desert sled.” Eastern riders fought to keep water out of their carbs. Out west, it was sand. Looking at very early motorcycle racing photos, you may see completely open intakes. But riding the Beach Course at Daytona, or riding in the desert, drove tuners to develop ways to keep highly destructive sand out of engines.

While a 60’s Triumph suspension and chassis geometry was pretty good on the street or dirt roads, plowing through sand, over rocks called for ground clearance and stability. Frames were modified for more rake, higher quality Ceriani forks were installed along with long travel shocks. Dunlop, Pirelli, Goodyear and Avon all produced coarse lugged knobbies, the lighter-in-weight Dunlop Sports was perhaps most popular. Rim locks kept tires, run at low pressure for traction, from slipping on the rim and ripping out valve stems like what happened to Ed. An overlay sprocket setup offers lower gearing. Stock steel rims were tough, a bit heavy, but shed mud and sand unlike flanged Akronts or Borranis.

The skid plate, often hand made, some from scoop shovels, protected crankcases and the primary cover from rock damage, aided in sliding over rocks and logs. Nicely tucked in high pipes were an accessory, added ground clearance. Though Ed’s bike is equipped with a Preston Petty front fender, “Snow Fenders” might be used, easy-to-clear flat aluminum bent to the tire’s radius. The Big Bear Enduro would finish where the snow could get quite deep! Hand controls could be stock or uprated to Megura. Spare levers and perches, also cables and spark plugs, were kept on the bike, cables often piggy-backed ready to connect. The real leather upholstered seat made by Bates is smaller, lighter than stock. A tool kit with tire irons and patches was mandatory; there’s no roadside assistance in the desert.

Jim Peterson sold the motorcycle to his good friend Chuck Cummings. Cummings put his son Chuck Jr. on the motorcycle to race. Cummings Jr. was a Bultaco sponsored rider on Saturday and raced this Triumph in amateur open class on Sunday!  He was District 37 champion on this motorcycle many times and even beat Eddie Mulder once on it. When you visit the National Motorcycle Museum you can see Ed’s Triumph TR6SS and a few dozen other British bikes including Douglas, Norton, Ariel, BSA, some over 110 years old.
Specifications: