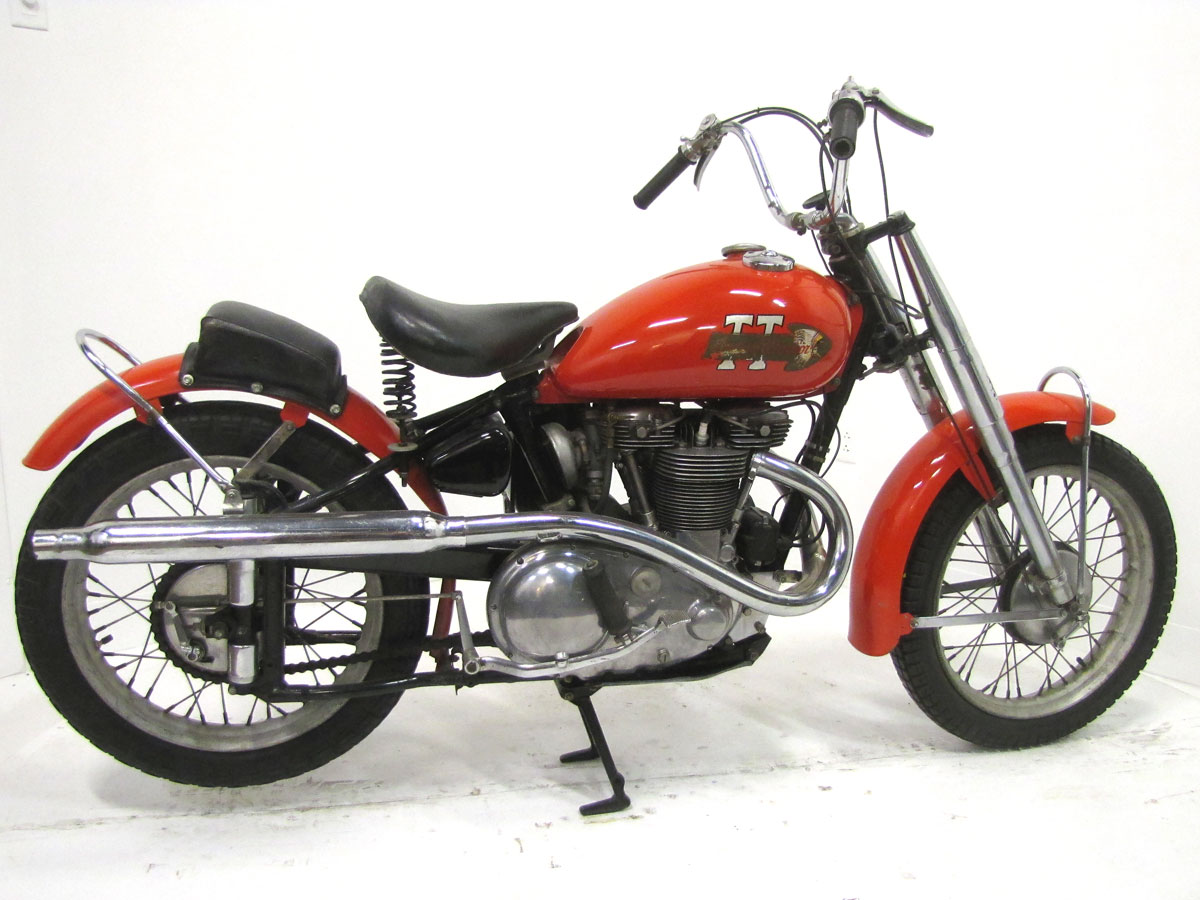 As we have read over the years, in flat track racing there is great traction advantage brought on by the power impulses of a V-Twin engine. And of course with Indian and Harley, that design goes back over a century. Yet likely thinking to the future, and new 500cc rules involving overhead valve engines, Indian developed a replacement for the highly successful V-Twin Scout. It was the Warrior, a 440cc parallel twin in the form of British bikes of the time. After a couple of model years, they released the racing version, the 500cc Warrior TT. Long after the Scout was out of production, Bobby Hill, Bill Tuman and Ernie Beckman did podium finishes on the old Big Base V-Twin into the mid-1950’s, and others still ran the old V-twin racer with success. The new Warrior did not fair so well on the street or race tracks, and Indian was in financial difficulty, just a few years from the end. It’s all an interesting study in timing, marketing and engineering.

As a purpose built racer, the Warrior TT design had longer front and rear suspension, had no lighting system. Both cylinders fed into a common high level exhaust pipe finished with a muffler. Though a plunger style rear suspension was brought into the design, a traditional sprung solo saddle was standard. Foot shift on the left side was a modern touch. Fenders and tank were finished in a striking red-orange, and a bold graphic appeared on the tank.

World War II was rough on the motorcycle industry in America, of course even more-so in England and Europe. Foreign factories were bombed and things were never the same. In America, now at war, involved in protecting the future of democracy, Harley-Davidson fared well with large military contracts yet served their dealers best they could. Indian failed to come up with a match to what the military wanted, and by most accounts neglected both dealers and customers, trying to focus on supporting the war effort. Almost immediately post-war, British-style OHV singles and twins were launched by Indian. A customer base, including police departments, used to traditional flathead V-Twins did not take to the new lightweight machines, and there were technical problems as well.

This new line of OHV Indians was developed as a “modular” experimental design begun in 1943; each 220cc cylinder and head was separate. A 220cc single used one module, a twin used two and the prototype 880cc Torque Four used four. Initially a 440cc street bike enlarged to a 500, the Warrior was beginning to have only moderate sales impact among V-Twin traditionalists. In 1950, the Warrior TT competition version was launched. Recall that in this era, an overhead valve machine suffered a 250cc disadvantage; flatheads like the Sport Scout or WR could be 750’s while overhead valve motors had a displacement limit of 500cc’s.  Contemporary literature shows the Warrior TT worked well in the hands of local amateur dirt trackers and enduro riders, but though employing the latest technology was no match for the old Indian flatheads on dirt tracks.

Among a good range of dirt track racers, 100 plus years of history, including Harley’s, Indians, BSAs, Triumphs and more is this Indian Warrior TT on loan from the Jill and John Parham Collection.
Specifications: