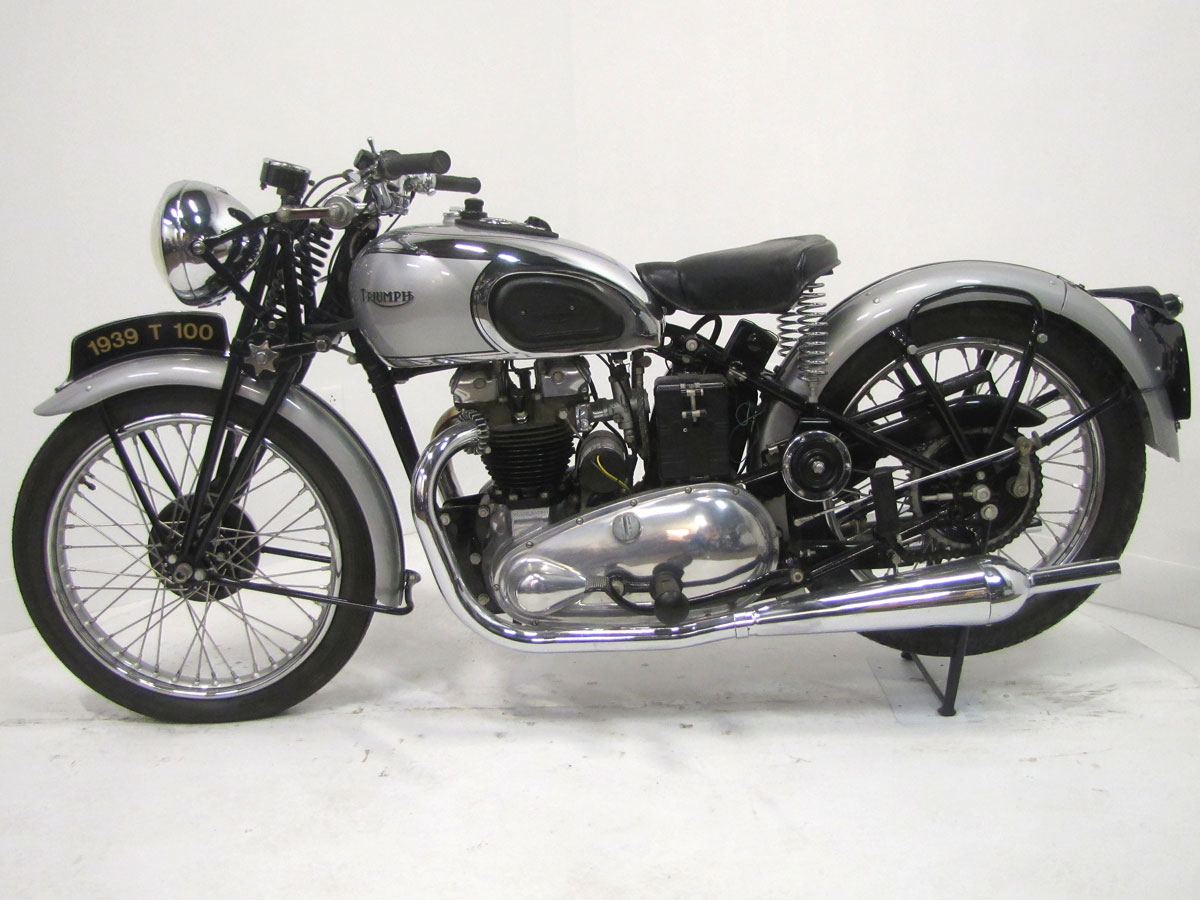 Edward Turner’s design for the new Triumph, the Speed Twin caused a stir when shown to the public in 1937 as a 1938 model. The Speed Twin was joined by this machine, the high performance twin carb Tiger, for 1939. The 100 referred to the Tiger’s available top speed.

Triumph made a bit of a spectacle of the new bike’s launch. Stock T100s, a Tiger and a Speed Twin made an 1800 mile run, stopping only for fuel and rider change. On roads and then at Brooklands race circuit the new Tiger averaged almost 80mph for six hours, then climaxed with a lap at 88.5.

A master at motorcycle design and styling, Turner got his start at Ariel where he designed the famous Ariel Square Four. While the parallel twin he penned at Triumph was not completely an original idea, Turner perfected it, trimming weight and dimension, making a good looking high performance, yet light and compact design.

Tanks, fenders, luggage racks, even mufflers came under Turner’s eye. His designs were especially well received by the American market in the 1950’s and 1960’s, before the “Japanese invasion” by what have become known as the “Big Four.” Until the “oil in frame” Triumphs came along for 1971, Turner’s original design evolved and was central to great Triumphs like the Bonneville introduced in 1959.

On the night of November 14, 1940 the Triumph works was destroyed by German bombers along with much of  Coventry, England and Triumph production ended until after the War. Post-War, the Tiger 100 re-appeared with the new telescopic fork, so this bike is a great reminder of Turner’s original design.

When you visit the National Motor Museum in Anamosa, Iowa you can see this fine early Triumph Tiger and many other great British machines, including Ariels, Douglas, Brough, Vincent, BSA, Norton and more. Don Rosene of Alaska loaned the Museum this fine Triumph some years ago. It is key to the evolution of Triumph’s nearly 120 year history.