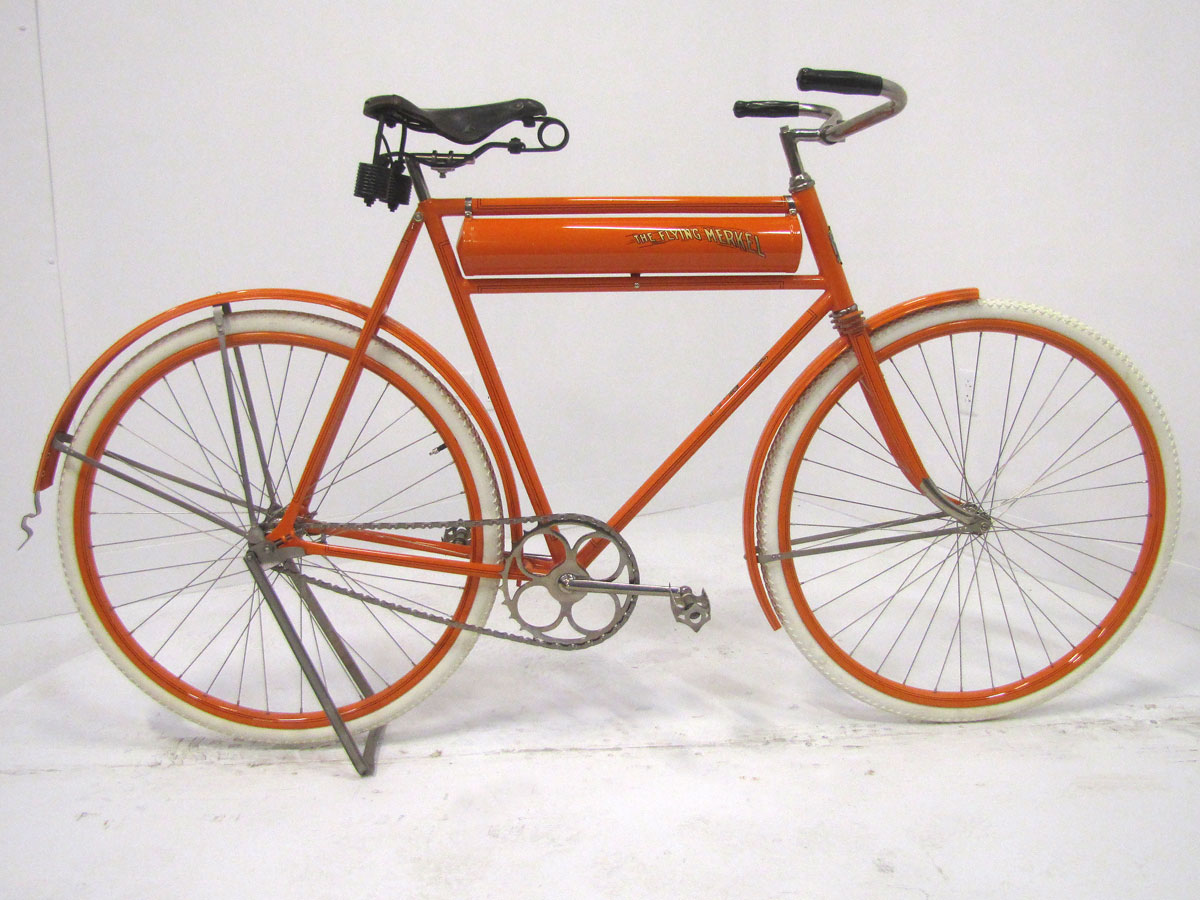 The National Motorcycle Museum is widely known for its massive, and diverse, collection of motorcycles. But some are surprised to know the Museum also has a significant bicycle collection. As their histories are joined, John Parham knew it was logical to tell the bicycle and motorcycle stories side by side.

This week’s featured bike is a Merkel bicycle, likely made for Merkel by Miami Cycle. It was not unusual for motorcycle manufacturers including Harley-Davidson to contract with bicycle makers, but specify frame design, components, paint and badging to be employed. Merkel motorcycles are known for their unique orange color and many of their bicycles were done in the same orange.

What is very rare about this Merkel is the “tank” which is unusual to come across. As with more modern bicycles, this could be used to contain a battery for lighting, though we are not certain if this frame originally employed this tank, or if it was added later. The brazed, not lugged, frame and tank are more recently painted so clear evidence is lacking. Other frame design features like the “split” bottom bracket, holding the pedal crank, and the stays, holding the rear axle as well as the fender mounts and seat post help, but there are no “serial numbers” visible. The fork design does not show up in Merkel catalogs we have reviewed, nor does the eagle Diamond Perfection seat, but most features say Miami Cycle/Merkel, as do the one piece pedal crank, clover sprocket and the Pirate #1 pedals.

If you are a bicycle historian and can add to the discussion above, please click “Comment” below and tell us what you know.

In the ‘teens and early ‘20s era, this was a top quality bicycle with few being made, few still existing from Miami’s 1912 to 1923 production of Merkel bicycles. When you visit the National Motorcycle Museum make sure you spend some time with the bicycle collection. Bone shakers, penny-farthings, early tricycles, stylish pre-World War II designs and even some Schwinn Sting Rays are all here to help you trace well over 125 years of early two-wheeling design and technology.