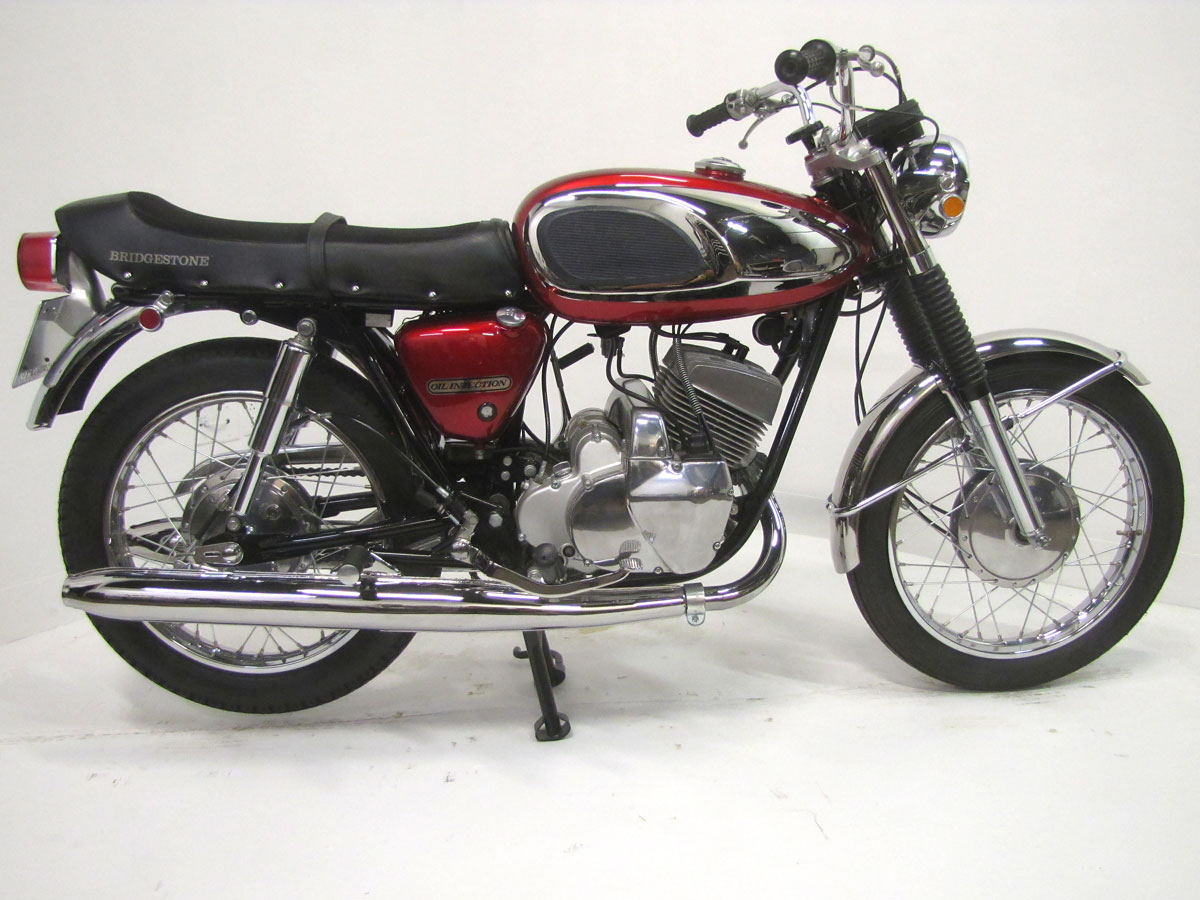 Almost as soon as motorcycles came available in England, Europe and the United States, they were exported to Japan. This was around 1905 and soon the motorcycle landscape in Japan looked much like it did in the rest of the world. Even lightweight singles like Indian and Harley made before 1910 were studied then designed and manufactured in Japan, and they borrowed heavily from French engine designs as did American designs. But decades later global financial problems, Japan’s government intervention, wars, build quality, dealer involvement, currency exchange and other obstacles reduced the post World War II group of Japanese exporters to Marusho, Lilac, Kawasaki, Honda, Suzuki, Yamaha, Tohatsu, Hodaka, Bridgestone and a few others. But by 1962 really only a handful survived on the competitive sales landscape, and one was Bridgestone who had just begun motorized bicycle manufacture in 1958.

If you lived in the late Bridgestone era, in the late 1960’s, you may recall Bridgestones had great candy apple paint, were heavily chrome plated, used rotary valve induction, also used by Kawasaki, and chrome plated cylinder bores. They were, and still are very sharp looking bikes and excellent runners. Recollection is that dealership locations were a bit haphazard in the Midwest and by this time the “big four Japanese” had a good foothold on the market, shut out most other Japanese makers, though dirt bike-focused Hodaka was a player as well.

Regarding Bridgestone’s demise, there is the story that as a major tire supplier to Honda and other Japanese makers, it was “suggested” they stick to tires, not compete in the motorcycle market if they expected tire orders to continue. Other historians focus on Bridgestone’s corporate board seeing higher profits in tire manufacture. In 1968 Bridgestone won Japan’s most prestigious manufacturing award, the Deming Award for Excellence in Quality Management.  They were gone from the U.S after 1971 with their last two years of manufacture done not in Japan, but by Rockford in the United States.

Looking at this machine now it’s among the best of late 1960’s Japanese designs. The engine cases are nicely shaped, highly polished, shocks fully enclosed (more chrome!) and the seat’s shape mimics road racers of the era and uses a suede vinyl on top, another road racer cue. The sleek fuel tank is devoid of any graphics. Oddly, the kick starter is on the left. Advanced, there’s a six speed transmission and a transmission fluid sight glass. A nod to the era, the shifter and rear brake pedal can be swapped left to right.  Toward the end of production, an up pipe scrambler model, the GTO was offered in a flashy gold paint scheme.

When you visit the National Motorcycle Museum you can look over this fine early Bridgestone 350GTR, a marque from a distant time, and compare it to Yamahas, Suzukis, Kawasakis and Hondas of the era, even 500cc British bikes which it competed with in showrooms of the era.

This GTR was meticulously restored by Bridgestone specialist Steve Reed, for Richard Clark and a tremendous amount of new old stock parts were used. It is currently owned by Kerry Pagenkopf who very recently graciously loaned it to the Museum. At some point Kerry may be bringing over for display his “up pipe” 350GTO as well.