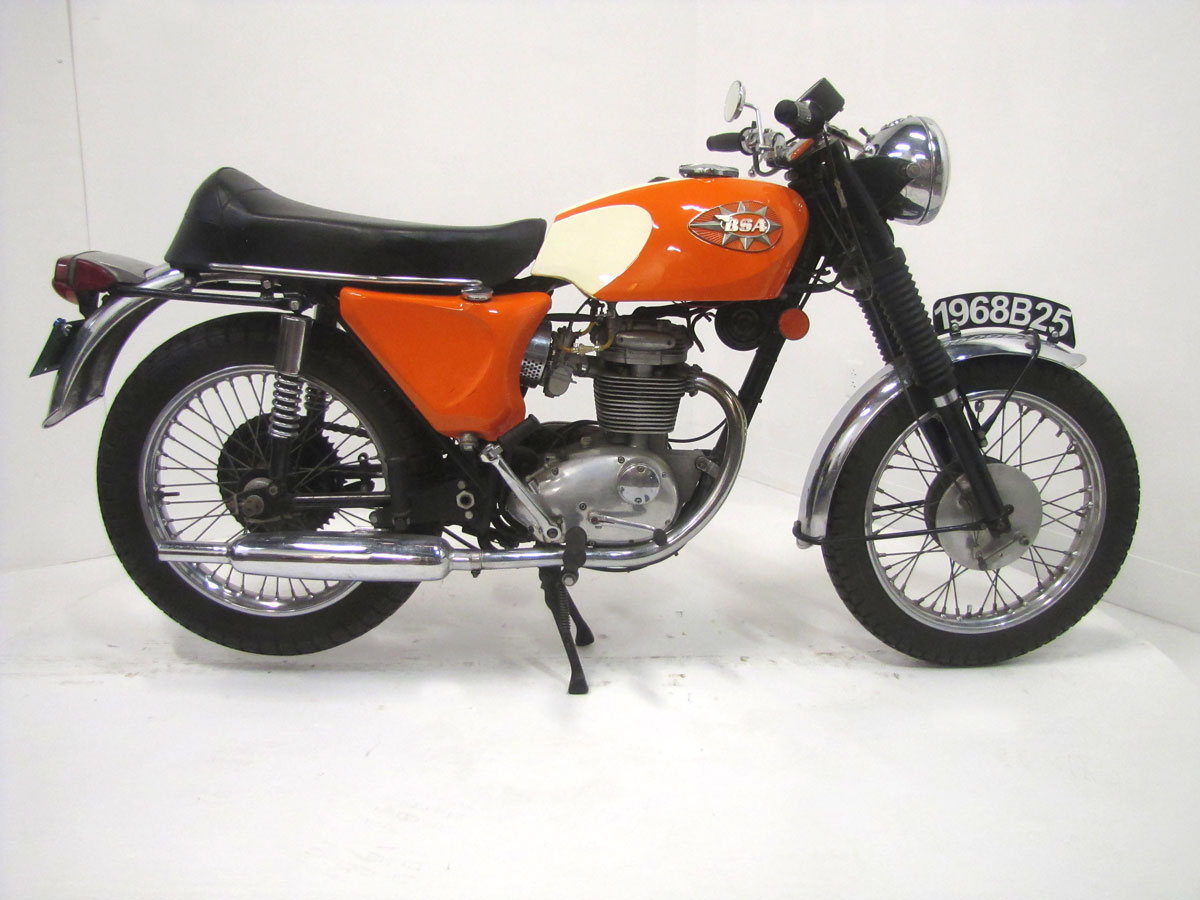 The origins of the 1968 BSA B25 Starfire go back some 30 years before to 1938 and the BSA C10, a simple flathead motor in a rigid frame which evolved nicely. When World War II ended, an overhead valve 250 became the small machine’s power plant and about ten years later swingarm rear suspension became available in the BSA C12 for 1956. Long a machine with a separate transmission case, in 1959 the engine/transmission became “unitized.” Styling changes came quickly as BSA needed to compete with some great 250cc to 350cc range machines from Japan, most, like the BSA, in the $700 price range. The BSA fuel tank almost says “starfire” with its interesting sculpted shape, the flashy BSA badge and sporty two-tone paint. It was offered in a striking blue for 1968, a soft orange for 1969, both two-toned with ivory white. The engine cases help here also as they are streamlined, not a “shrink fit” over their internals like Japanese crankcases and sidecovers of the time.

Though over the years BSA has made parallel twins and V-twins, even transverse triples, the single cylinder engine was a mainstay power-plant. 250cc, 350cc and 500cc class machines served well as street bikes but as racers maybe even better. The Gold Star and later B50 500 singles performed in trials, motocross and road racing. In the late 1960’s Jeff Smith brought home several motocross championships on a variety of scrambles and MX models. Earlier, in 1954 on the beach course, BSA took the top five places in the Daytona 200 and was then the largest motorcycle manufacturer in the world. 15 years later BSA was failing and its doors were shuttered in 1972, the year after Dick Mann rode a BSA Rocket III to a win at Daytona Beach. The British motorcycle makers saw their sales start to slip in the mid-1960’s with the advent of light weight, well-priced motorcycles from Japan.

This BSA Starfire, graciously on loan from the Soo Cycle Club of Souix City, Iowa,  is one of about ten BSA’s at the National Motorcycle Museum including road race, dirt track and stock production BSA’s you can enjoy when you visit. Make sure you compare this 1968 B25 Starfire to the 1971 BSA B25T Gold Star, a later iteration of the BSA 250 in off-road trim.
Specifications: