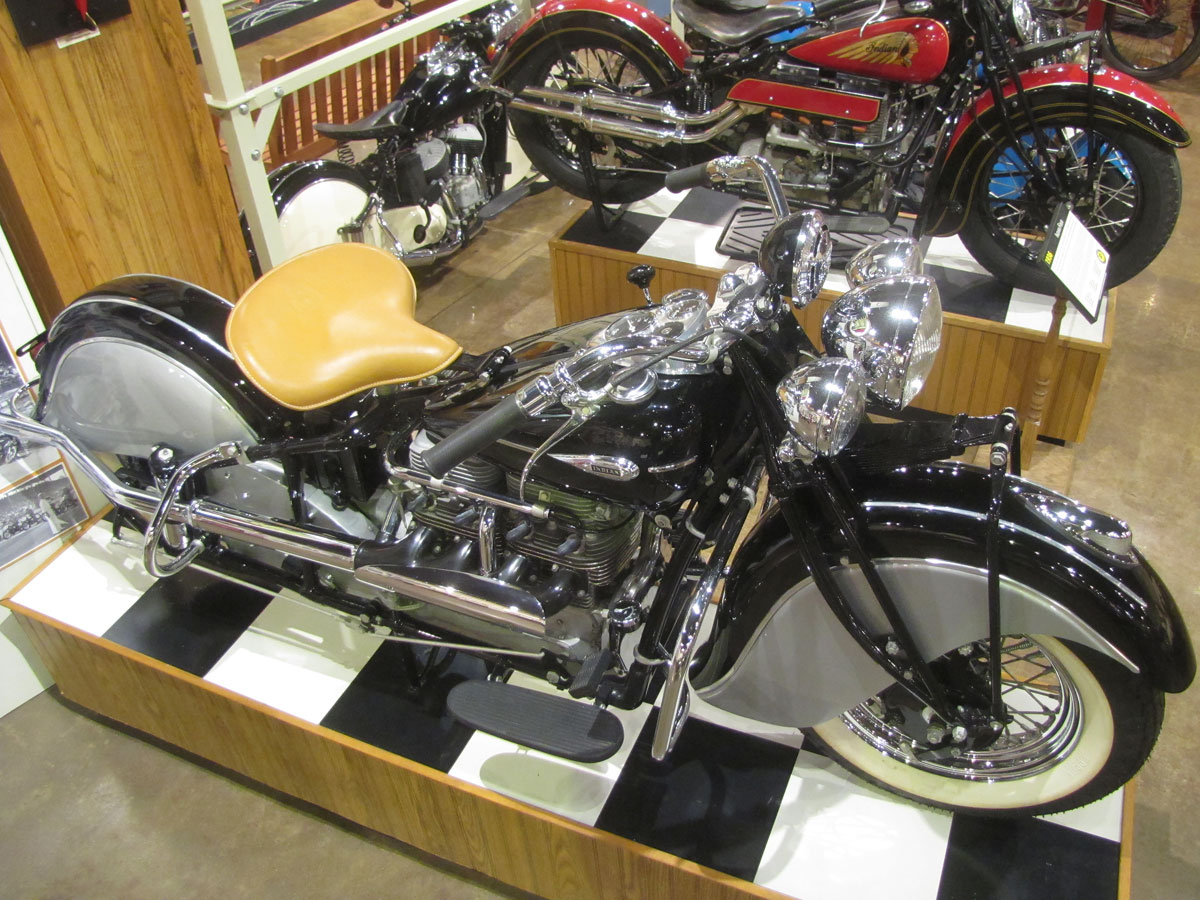 “Smooth flowing power that speaks in a whisper compared to other motorcycles. Remember – four cylinders! The Indian Four needs no salesman.” Quote from an Indian Four catalog.

The original Indian Four of 1928 used an Arthur Lemon and Bill Henderson-designed engine, a design obtained when Indian bought out Ace from the Schwinn Bicycle Company of Chicago. The bore and stroke was 2.75 x 3.25 inches for a displacement of 77.21 cubic inches, 1,265 cc’s. The Ace in-line layout produced 30 horsepower with overhead inlet valves and inverted, or side, exhaust valves remained constant except for 1936 and 1937 when the set-up was reversed making the “upside down Four”.

“The 1941 Indian Four had grown up to be the spring-frame Indian Four. Bigger tires further added to the appearance of weight. Power output had climbed. Most Americans thought bigger was better, so skirted-fender Fours fit right in,” Jerry Hatfield, author of the Indian Motorcycles book. But unlike the “spring frames” of the ’teens, this was a “plunger” design as you can see in the photos. Hatfield also takes our eyes to the right side of the bike and notes how the sweep of the down tube matches the curve of the fender. The high level straight exhaust pipe, however much heat it may put on the rider’s leg, looks great as well.

With America drawn into the World War on December 7, 1941, Indian Four production was essentially over. Thus ended an astonishing era of motorcycle history and development overall; the Indian versus Harley-Davidson war would soon be won by the Milwaukee firm. The Indian Four is, no question, a magnificent monument to the company and is highly prized among collectors. By May of 1953 the last American-made Indian had left the Springfield, Massachusetts factory. With tens or thousands manufactured since the late 1960’s by many manufacturers, the in-line four is a great smooth running design, just as it was some 80 years ago.

This fine, fully restored Indian Four is on loan from Brenda Verschoore and is part of the special Indian history exhibition at the National Motorcycle Museum. In total about 20 Indians are displayed at the Museum; race bikes, prototypes and stock machines.