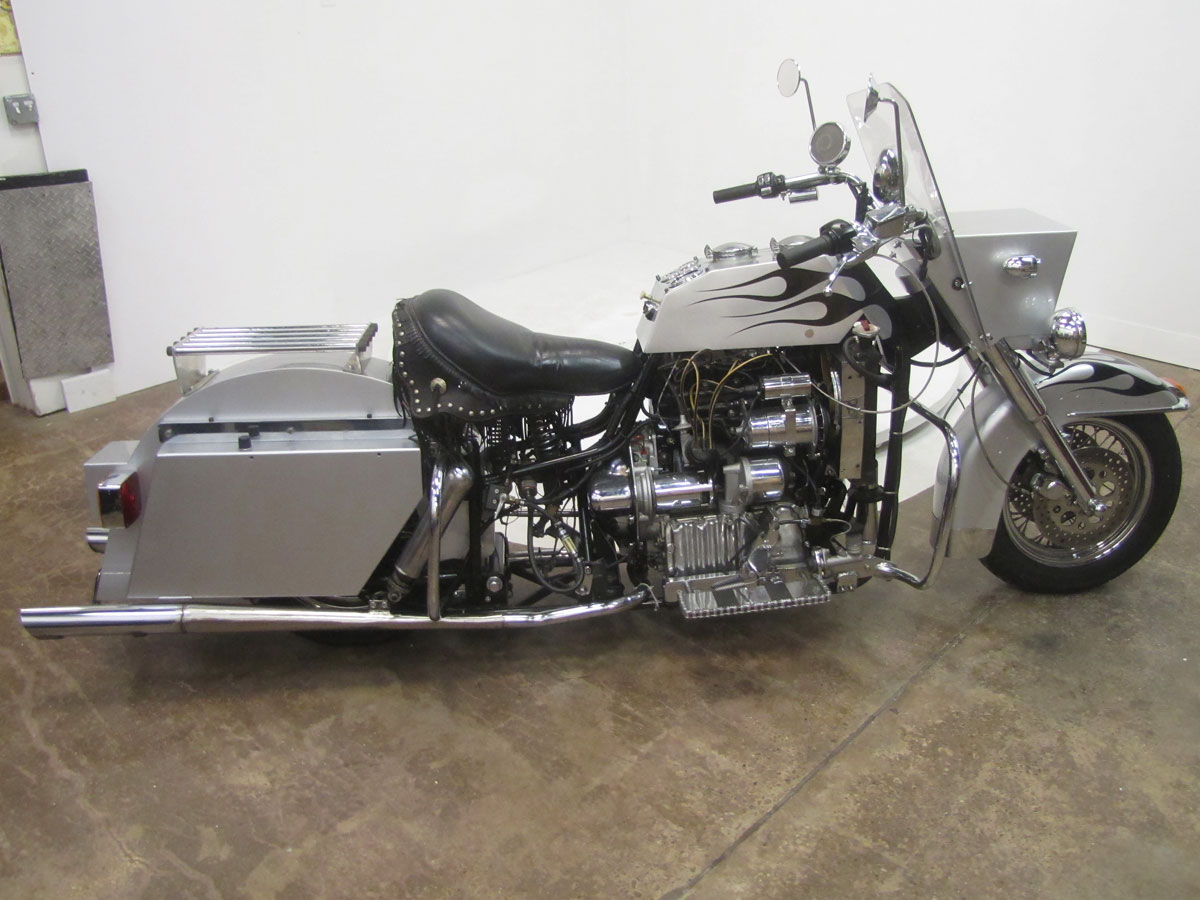 You can judge for yourself as the builder is not around anymore, but was William “Wild Bill” Gelbke in constant need of a fabrication project, or did he seek something better than what dozens of motorcycle manufacturers engineered and mass produced? Involved projects, Gelbke built around ten big bikes, including RoaDog and this, the Auto Four both now at the National Motorcycle Museum.

It’s likely you know a motorcyclist or a hot rodder that is not happy unless he’s designing and fabricating his next vehicle or at least customizing his bike. Maybe that’s Gelbke. But he also sought smoothness in his bikes, which comes with mass, and he wanted dependability. Automobile engines, while heavier, are smooth, torquey and 40 to 50 years ago, probably more dependable than most bike engines of the era. Gelbke was schooled in engineering, worked at McDonnell Douglas in California and repeatedly worked to design and construct his perfect motorcycle.

Like the German designer Friedl Munch, engineer of the Munch Mammoth, Wild Bill went “automotive” for his ideal engine. For RoaDog Bill chose a four cylinder Chevy engine. Auto Four is powered by an Austin-America engine of 1275 cubic centimeters, uses an automatic transmission and a BMW motorcycle third member. Where we see a lot of nice English wheel and hammer work on today’s custom builds, Gelbke was happy to use a brake and fabricated the fuel tanks, saddle bags, headlight nacelle. But the front end and fender are from a production Harley-Davidson big twin, the seat probably an Indian Chief and the gauges are automotive aftermarket. Two fuel tanks give a combined 15 gallon capacity.

According to a story published by the aftermarket parts company REVZILLA, at one point in its life, this Auto Four sat destitute before being rescued and restored by a guy named Robert Mondo of Roselle, Illinois who has donated it to the National Motorcycle Museum. (Bob also has a Corvair boxer six-powered bike!) The Auto Four is a runner again but will sit quietly in the Museum not far from Gelbke’s earlier creation, the magnificent 17 foot long, 3200 pound RoaDog.