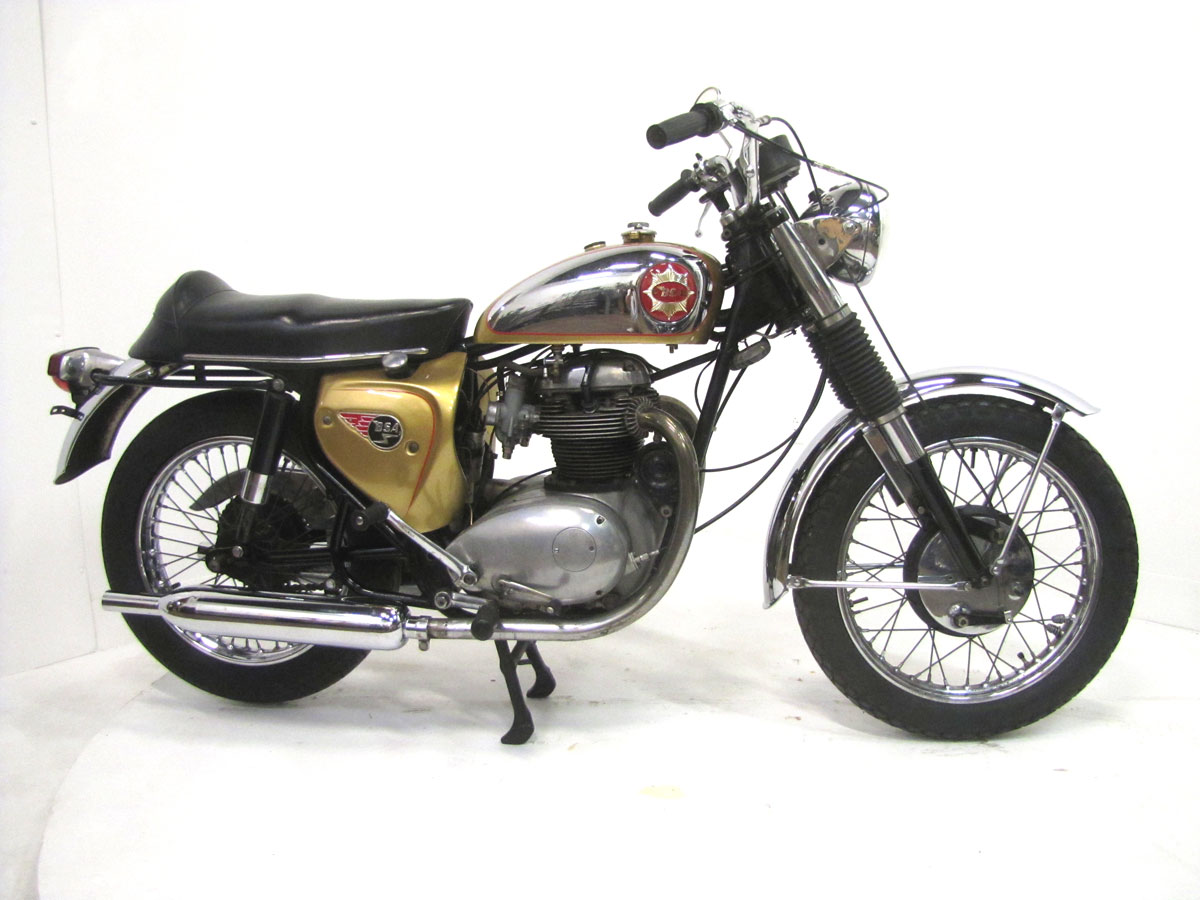 In the mid-1950’s BSA won the first five positions at the Daytona 200 on the beach and were on top; BSA was then the World’s Largest Selling Motorcycle. Though BSA was competitive in dirt track and road racing events, Triumph began to overtake in sales numbers though all British makers were suffering from a lack of technology and design innovation against the Japanese makers.

The BSA Lightning was a dream bike to many riders in the 1960’s. Lavishly chrome plated, painted in candy-apple red, or metallic gold like this example, and traditional in design, Triumphs and BSAs satisfied until the Honda CB750 hit in 1969, the year after this BSA was made. The Honda CB750 changed everything. The twin carb Lightning was offered from 1965 until 1972 when BSA went out of business.

The “pre-unit” BSA A10 650 twin was made from 1947 to 1963, then the “power egg” A65 unitized engine was offered. This put engine, transmission and primary drive in one set of castings simplifying manufacturing and sealing. BSAs looked fairly traditional with lots of chrome and polish through the 1970 model year. In 1971 Triumph and BSA, both owned by BSA, went to “oil in frame” designs which met with resistance from the motorcycling public. Laws mandated turn signals, stylists went new directions including using an odd pale gray paint on BSA frames and another nail was driven into the coffin for BSA.

Not content with the typical alpha-numeric system of naming its motorcycles, BSA’s marketing department was always over the top when naming their bikes: Gold Star, Hornet, Rocket, Golden Flash, Spitfire, Cyclone, Lightning, Firebird, Shooting Star, Victor, Royal Star were some of the monikers. Displacement, number of carburetors and cylinders, exhaust systems, intended use plus general state of tune were the differences. BSA styling in the 1950’s and 1960’s was a strong part of the brand; chrome, polished aluminum and candy-apple paint.

When you visit the National Motorcycle Museum, or scan past featured bikes on the Museum website, you can see a wide range of BSAs and other British motorcycles. BSA Gold Star racers, a fine Y13 V-Twin, along with Vincents, Broughs, Douglases and Velocettes are on display. This flashy BSA Lightning is part of the Jill & John Parham Collection.