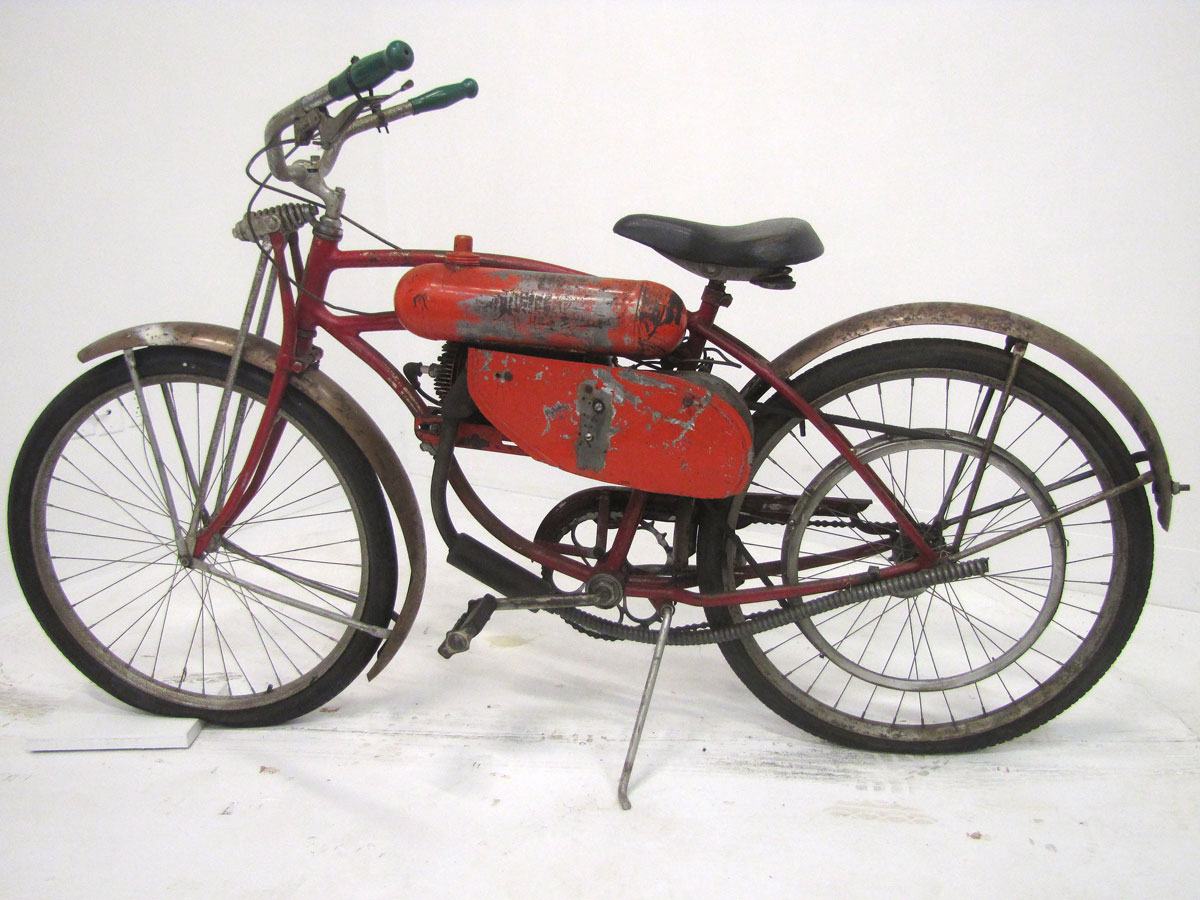 In the early years, the American motorcycle industry served riders with a broad range of machines including lightweight singles. But post-Depression most American motorcycles were at least 500cc’s and had a considerable weight and price tag. The price of a new Indian or Harley-Davidson could buy most of a new Ford or Chevy.

But the scooter niche, which began in the 1920’s, offered a more affordable, convenient and light weight alternative. American industry adapted, diversified and we saw machines like Salsbury and Cushman scooters come along and then the Whizzer, a power cycle built around a bicycle chassis. Not a new idea, the clip-on engine for a bicycle, but they served well here and abroad. In fact, Honda’s first machine post-World War II used a War surplus Tohatsu engine.

A Racine, Wisconsin engine and lawn mower manufacturer considered ways diversify its offerings. The Jacobsen research and development department built about ten prototype power cycles using one of their small two-cycle engines mounted high above the pedal crank on a standard bicycle. The idea was to offer a kit customers could install on a standard bicycle, not to sell a complete machine.

The January 1985 edition of THE COASTER, the newsletter of the Classic Bicycle and Whizzer Club of America, tells the story. In 1951 about ten prototype kits were made by Jacobsen Manufacturing Company, Racine, Wisconsin, and installed on a range of bicycles. The Racine Explorer Scouts were engaged to test the new machines on a 1000 mile ride through Wisconsin and Michigan, followed by a truck with mechanics, factory staff and spare parts. The test went well and each Scout was offered his test bike for $45.

But the rest of the story is that an employee apparently lost part of a finger in a drive belt perhaps before a belt guard had been designed in, and the company cancelled the project. Long time Museum supporter and motorcycle lender Dan Rognsvoog acquired this week’s featured bike. He enjoys that it’s a prototype, one of a few likely still existing, and likes that it’s pretty much original and has an interesting back story.

Knud Jacobsen, a Danish immigrant was a skilled woodworker and developed a successful industrial pattern making company, Thor Machine Works. Thor launched Jacobsen lawn mowing machines in the early 1920’s. Commercial in capacity, they were favored by golf courses. Jacobsen is now owned by Textron and is based in England.