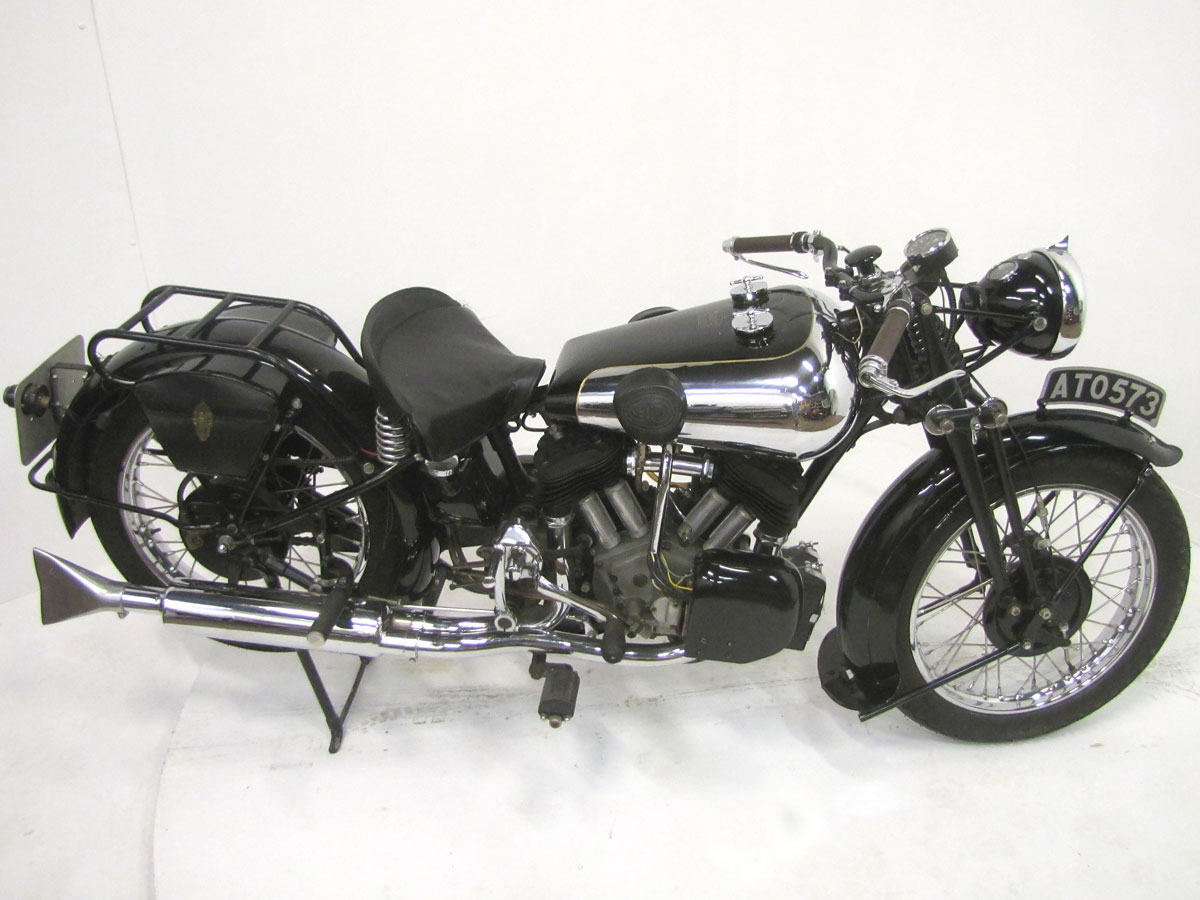 Just about any seasoned vintage motorcycle enthusiast’s eyes will light up when you say the words Brough-Superior. Though out of production for about 80 years, among all brands world-wide they are still regarded as very fine, even luxury motorcycles, if there is such a thing, even though their engines were sourced, not made by Brough. Along with Vincents which are more sporting oriented, starting about 40 to 50 years ago, Broughs gradually became highly collectable as production was limited to 200 to 300 machines a year in several model ranges. Rarity in old cars and bikes often, but not always, gets people excited and prices start to climb. Literature states 1933 was the first year for the 11/50 and only 73 were made that year. The “bevel driven magneto” on this week’s featured bike is a one year only design.

Brough motorcycles were described in period literature and advertising as the “Rolls Royce of Motorcycles.” Big, touring quality motorcycles with large, by British standards, V-twin engines and nice details like the nickel-plated fuel tanks and leather tool kits, Broughs were at the top of British two-wheeled designs. George Brough, pronounced “bruff,” personally certified every motorcycle built in his Nottingham, England factory. But Brough was not an engine maker. British engine builder J. A. Prestwich, J.A.P., supplied the engines. J.A.P. engines powered other brands of motorcycles and even some Morgan three-wheelers, also British made.

In the 1930’s George Brough developed a relatively high performance flat head machine at the request of police departments in Britain, Australia and Canada. Designated the “11/50,” features are similar to SS models though suspension specifications varied; some machines like this one used rigid frames, some were suspended and a couple of fork designs were available as many Broughs were made to order. A variety of approaches to taxing road vehicles were employed by the British government; in RAC terms this was an 11 horsepower motorcycle, but in factory sales literature this was exaggerated to 50. Reality lay somewhere in between. Noted for its torque, the 11/50 was popular for pulling a sidecar and attachment points are designed into the frame.

Brough Superior built motorcycles, sidecars and a few cars from 1920 to 1940, even made aircraft parts shortly after the start of World War II. Broughs were made from 1921 to 1940 with World War II halting production. Since Brough relied on other makers for engines and temporarily there were few after the War, George Brough’s company ceased production permanently. Capitalizing on a great history, much like Polaris has done with Indian, today a firm with rights to the name is once again building Brough-Superiors, thoroughly modern motorcycles which bear an outward resemblance to the originals.

The 11-50 remained in production from 1933-1939 and about 308 were made, some being exported to Canada and Australia to fill police force orders. This Brough-Superior is part of the John & Jill Parham collection. It resides in the area of the Museum reserved for HRDs, Vincents, a Y-13 BSA and other fine Broughs.