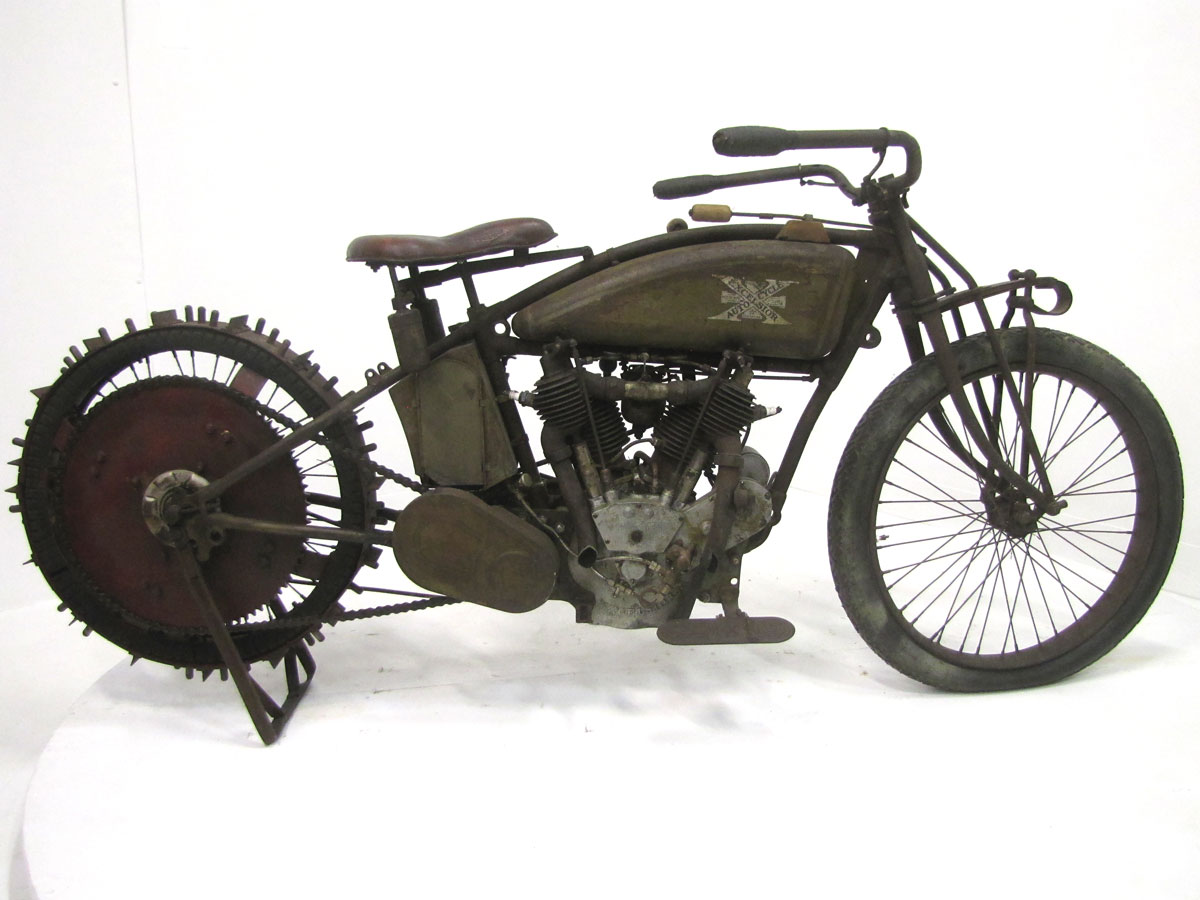 The story goes that the late pioneer motorcycle collector Jack Reddaman had no more room in his shop or barn, had so many old motorcycles that even an Indian 4 and an Excelsior hill climb bike sat outside. But the Fresno, California climate was dry, so the bikes survived. About 15 years ago, a friend, and real picker stopped by Jack’s shop and bought the Excelsior. Getting wind of the picker’s score, John Parham had to have it, so a deal was struck and out to Iowa and the National Motorcycle Museum it came in its well preserved state; original Excelsior transfers are visible on the primary and the tank. We are not sure what happened to the Indian, but the fate of the hillclimber was sealed. Unlike so many old motorcycles that rust away, the Excelsior is safe in a museum now. It’s a machine that any expert would look at and say, “Please. Never restore this bike. Just preserve it.”

Hillclimb as a form of professional racing began very early in the 20th Century and was especially popular in the eastern part of the United States. Many riders who competed in dirt track racing also raced hillclimb, a dead start, timed run up a steep dirt, stone and sand hill; Widow Maker and Devil’s Staircase are a couple of Midwest hill’s names.

Designed to blast up a hill in the shortest possible time, hillclimb competition machines often demonstrate great ingenuity. Rider skill and horsepower were important, but so was the machine’s handling and traction. While factories like Indian, Excelsior and Harley-Davidson offered factory built hillclimbers that ran on alcohol and had extended frames for stability, and to keep the front wheel down, competitors on a budget modified stock frames, built their own racers as well. Chains wrapping the rear tires were a common way to increase traction, but some riders tried “paddles” welded to the chains or directly to the rims. This builder, who probably competed with the bike in California, invented this stud and paddle combination on a 24 inch steel hoop on a 21 inch rim with a strip of tire in between that brought him traction. In later years such approaches did not meet AMA competition rules, were deemed too dangerous. Also note stock floorboards are in place; another way to keep the riders weight forward.

The Excelsior Motorcycle Company started production in Chicago in 1905. In 1911 Ignatz Schwinn bought the Excelsior company and later in 1917 he added Henderson to the makes he owned and manufactured. He stopped all motorcycle production 1931, continuing on making fine Schwinn bicycles, a trademark that exists to this day.

When you visit the National Motorcycle Museum you can view the hillclimb display, about a dozen hillclimbers, race posters and many photos. You can see a range of ways tuners fought for traction including Tom Reiser’s Harley-Davidson XR750-powered “Parallelogram Bike,” an alternative to conventional swingarm designs. This original Excelsior hillclimber is part of the Jill & John Parham Collection