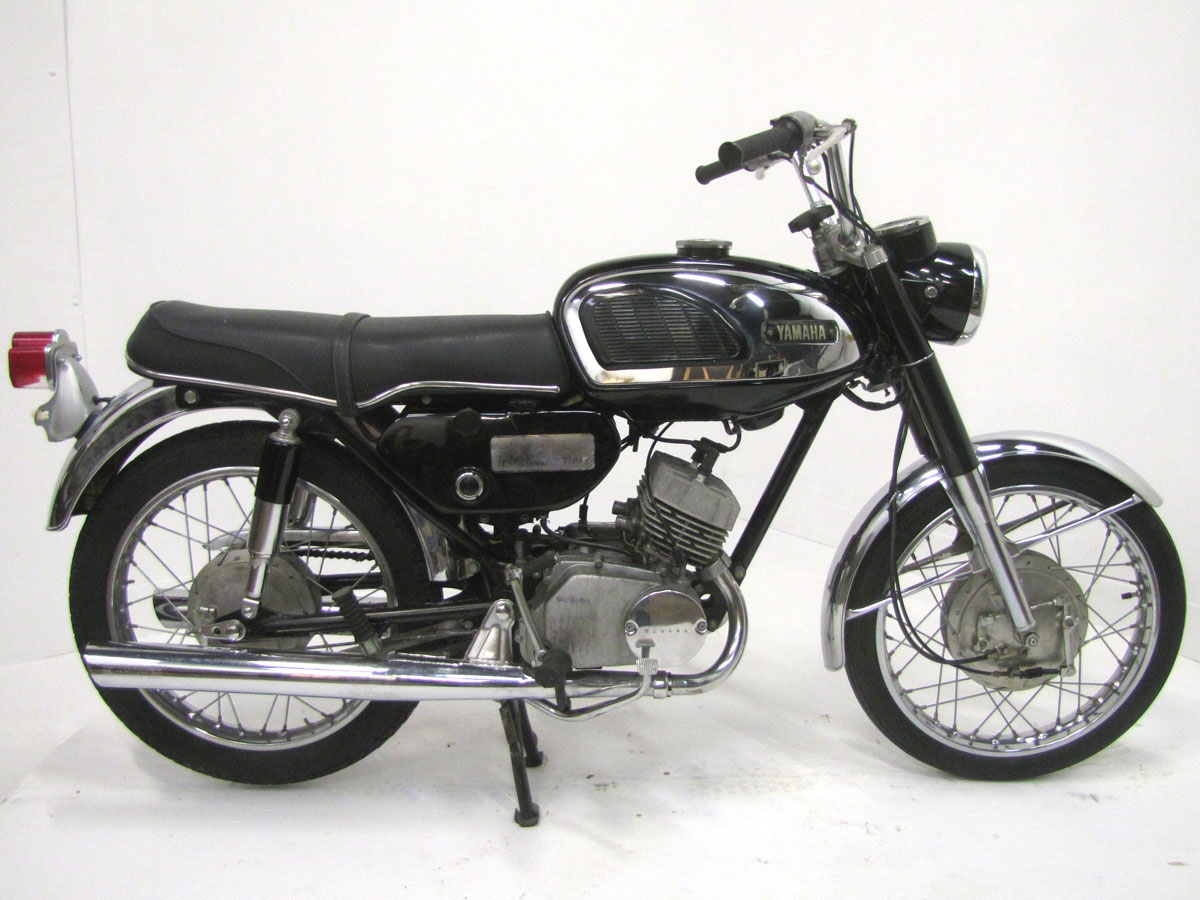 Combined, by the mid-1960’s the Japanese “big four” gave us dozens of offerings in street and trail bikes, two-stroke and four-stroke. In addition, there were Marusho and Lilac with touring bikes, Hodaka, Tohatsu and a few others that imported lightweight dirt and street bikes to America. And Bridgestone was a player for a while with hot rotary valve twins. Most Japanese styling had improved from earlier designs, some of which had mimicked German prototypes. Tubular frames became common and emulated what we saw on grand prix road racing motorcycles. And Yamaha, forever a “race to improve the breed” kind of company, brought us small yet high performance twins that emulated their race bikes.

While 180cc machines were not part of international racing classes, much of the design of the CS1 is like the 125cc twins Yamaha sold as production road racers. Also in the case of the CS1, we see a large twin leading shoe front brake similar to Yamaha’s racing components, and a racing styled front fender along with telescopic forks.

But as you look at this Bonanza, you see it’s missing its carburetors and control cables, was donated to the National Motorcycle Museum missing a few parts. If you know of a set of carbs, cables, etc and would like to donate them, we’ll add your name, as the bike’s sponsor, to the information plaque displayed with the bike in the Museum. Just add a note in comments below and we can connect.

Most Yamaha twins of the era used horizontally split crankcases, a built-up ball and roller bearing crankshaft, cast iron cylinders and dual carburetors. While not too many years before, Yamaha two-strokes required that you mix oil and gasoline, by this time oil injection was pretty much standard except on pure racing bikes. Depending on how you look at it, until 1968 Honda styling focused on cheaper silver paint as a trim color for fenders and side-covers while chrome plating was more liberally used by Yamaha, Kawasaki and Suzuki, who also used more “candy” colors. Most manufacturers had learned up pipes for the “scrambler” look was popular, and many Japanese bikes came in high pipe versions with shorter fenders and maybe a skid plate, braced handlebars.

Yamaha was founded in 1897 as a reed organ maker. In 1954 the company experimented with motorcycle manufacture and in 1955 split off the Yamaha Motor Co. Ltd. The original company is noted as the largest maker of all sorts of musical instruments, and both companies used the three crossed tuning forks are their corporate logo.

This nice Yamaha CS1 Bonanza is one of three bikes donated by David Harmon of Ohio back in 2013. It’s one of quite a few Yamahas on display, small and large, including a hand built drag bike using two TZ700 four cylinder two-stroke road race engines.
Specifications: