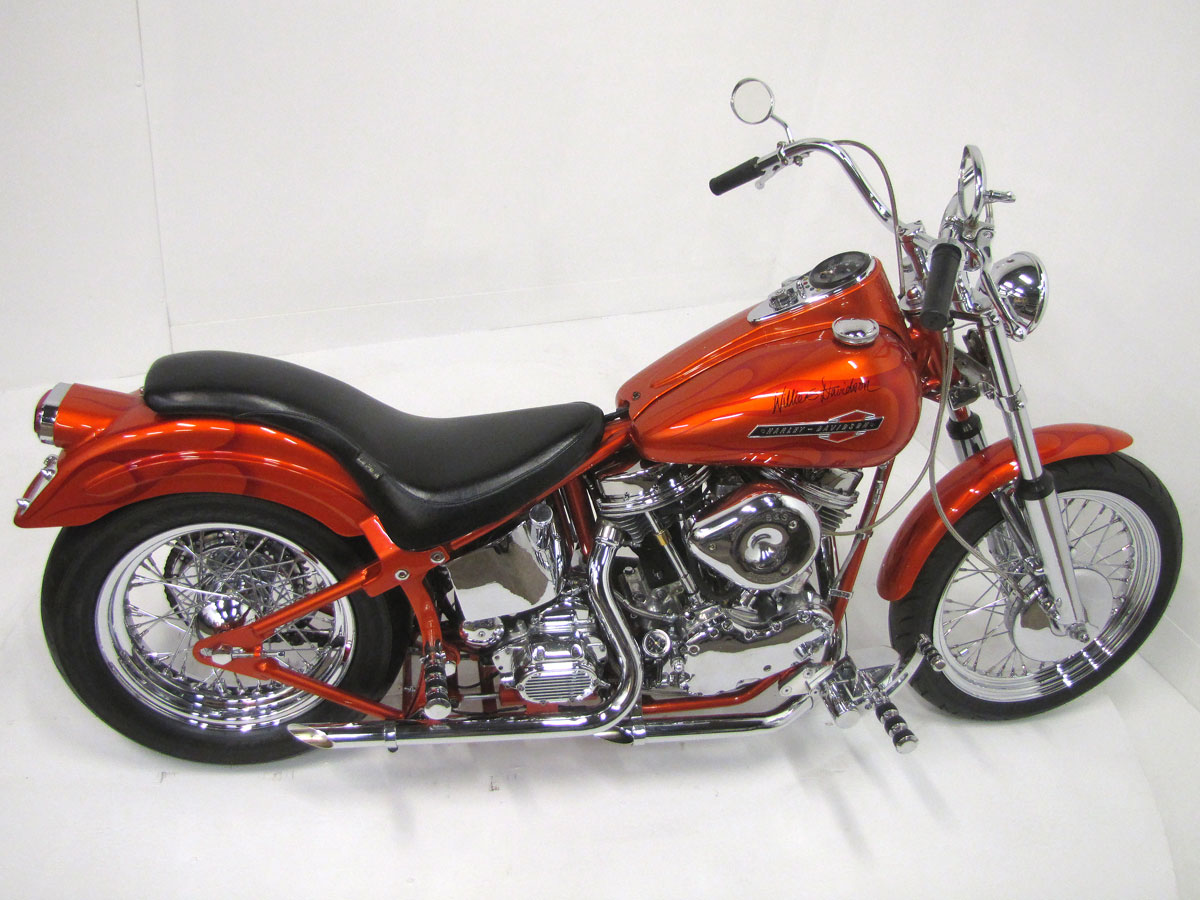 Typical of most American motorcycle designs from the start in the early 1900’s through 1957, the rigid, non-suspension Harley-Davidson frame is an iconic design, but it’s not a very comfortable ride. Sprung seats compensated, but even then on rough roads the rear wheel might lose contact with the pavement, tossing the bike around.

But did you know it was not the  Harley-Davidson Motor Company that invented the “Soft Tail” to solve those problems?

Preserving the look, but offering a few inches of suspension travel, Bill Davis of St Louis, Missouri first built a frame in 1976 that functioned a bit like a Vincent; a triangulated swing-arm with spring/shock units beneath the seat, the unpainted frame that’s on display at the National Motorcycle  Museum. It retains the simpler rigid frame look, but works much better. Davis invited Harley-Davidson to visit and look over the design he had drafted and built. They declined. 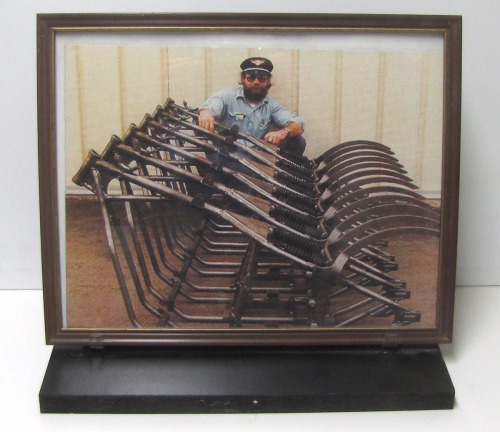 Bill Davis of St Louis, Missouri first with 6 of his frames

Then around 1980 Davis teamed up with Bill Francis, formed Road Worx Company and designed and patented the “Sub Shock” frame, which at a glance looks like a 1949 to 1957 Harley rigid frame. The Road Worx frame was used to build the orange Panhead featured this week, and on display at the Museum. In 1981 Road Worx manufactured and sold about 25 Sub Shock frames.

As I mentioned, Davis had invited Harley-Davidson to look at their first “top shock” frame design; no interest. On the second trip to St. Louis to visit Road Worx, Willie G. Davidson was impressed enough to buy the newer Sub Shock Frame patent and a complete bike Davis and Francis had built.

Shipping the bike to Milwaukee, in short order the Harley-Davidson development shop photographed, studied and engineered a production version first released as the 1984 FXST Softail, soft tail* becoming one word. The design really caught fire with the launch of the Heritage Softail which embodied the classic 1949 to 1957 rigid frame full fender styling, but with “hidden” rear suspension.

Still a leading seller, and perhaps savior to the Motor Company, in the 35 years that followed, over 1,000,000 Harley-Davidson Softails have been manufactured in many versions.

The orange Panhead-powered machine in the Museum display is the #3 Road Worx Sub Shock frame built in 1982. It belongs to St Louis resident Mike Holder. Mike’s bike took first place in the Bike Show at the Harley-Davidson 115th Anniversary Celebration, and was signed by Willie G. Davidson.

We thank Michael Holder for loaning his Road Worx-framed bike and rounding up other items for this small exhibit about a big idea; the Harley-Davidson Softail.

When you tour the National Motorcycle Museum you can read more about this Davis/Francis design, look at early development photos and even mechanical drawings they drafted, then built the frame from. And you can look at the whole range of Harley’s including Women on Wheels, Becky Brown’s gorgeous purple 2000 Harley-Davidson Heritage Softail  and if you wish, focus on 100 years of frames and rear suspensions as you walk through dozens of Harley-Davidsons.