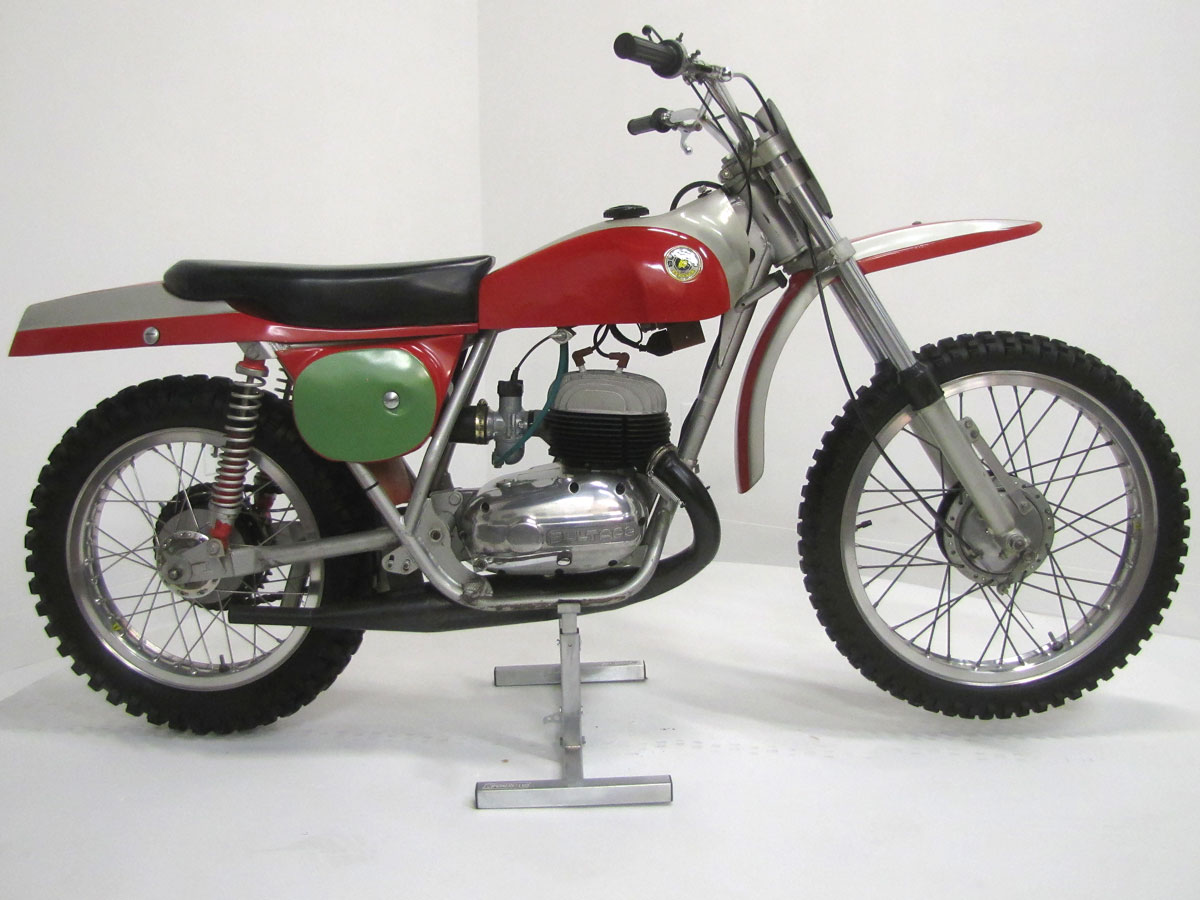 Around 1959 Spaniard Senor Bulto launched a new brand of competition and performance street motorcycles and called them Bultacos. The Bultaco logo was a “thumbs up” graphic popular to this day. Among Bultaco’s first offerings were street bikes and scrambles machines like the Tralla and Sherpa S. Then in 1965 the first focused motocross bike was added, the Bultaco Pursang; pur’-sang, meaning “pure blood.” The original Pursang was a 200cc Petite Metisse with a chassis developed by the Rickman Brothers in England. Named the Bultaco Pursang Metisse Mk1, some considered it a crude copy of the Rickman’s beautifully executed Petite Metisse. Most Pursangs were 250cc machines but 125, 360 and 370cc displacements were available over the span of the brand’s production, plus a works 400. Though the Bultaco brand is still out there, and a lot of replica parts are available, actual factory production ceased around 1983.

Still noted for their style among collectors, Model 48 and its successor the Model 68 Pursangs made use of fiberglass for major body components. Nicknamed the “pelican (front) fender” and “box tail” bodywork designs, they were handsome yet fragile compared to Preston Petty’s aftermarket parts which were common modifications after the first crash. Vintage motocross racing enthusiasts consider Pursangs among the best performers of the twin shock era.

Jim Pomeroy, champion motocrosser, made the name Pursang famous with his wins in AMA Pro Motocross, but also in the Spanish Motocross GP in 1973. He not only became the first American to win on a Spanish bike, but also the youngest rider to win a World Championship Motocross Grand Prix and the first rider to win this type of event in his debut race!

Mark IV Pursangs were made in this earlier “round case” design, and beginning with serial number M68-01884 used a “square cylinder” and flat sided, more squared off engine side covers. This round case Mark IV Pursang was found in 1997 partially disassembled at a swap meet in California, and retains all of its original finishes, upholstery and tires, though the expansion chamber and Amal carburetor are new old stock as are most of the small rubber parts and the round foil sticker at the rear of the “box tail.” It’s on loan from Mark Mederski of Ohio and is one of many MX machines from several countries you can see on your next visit to the National Motorcycle Museum.