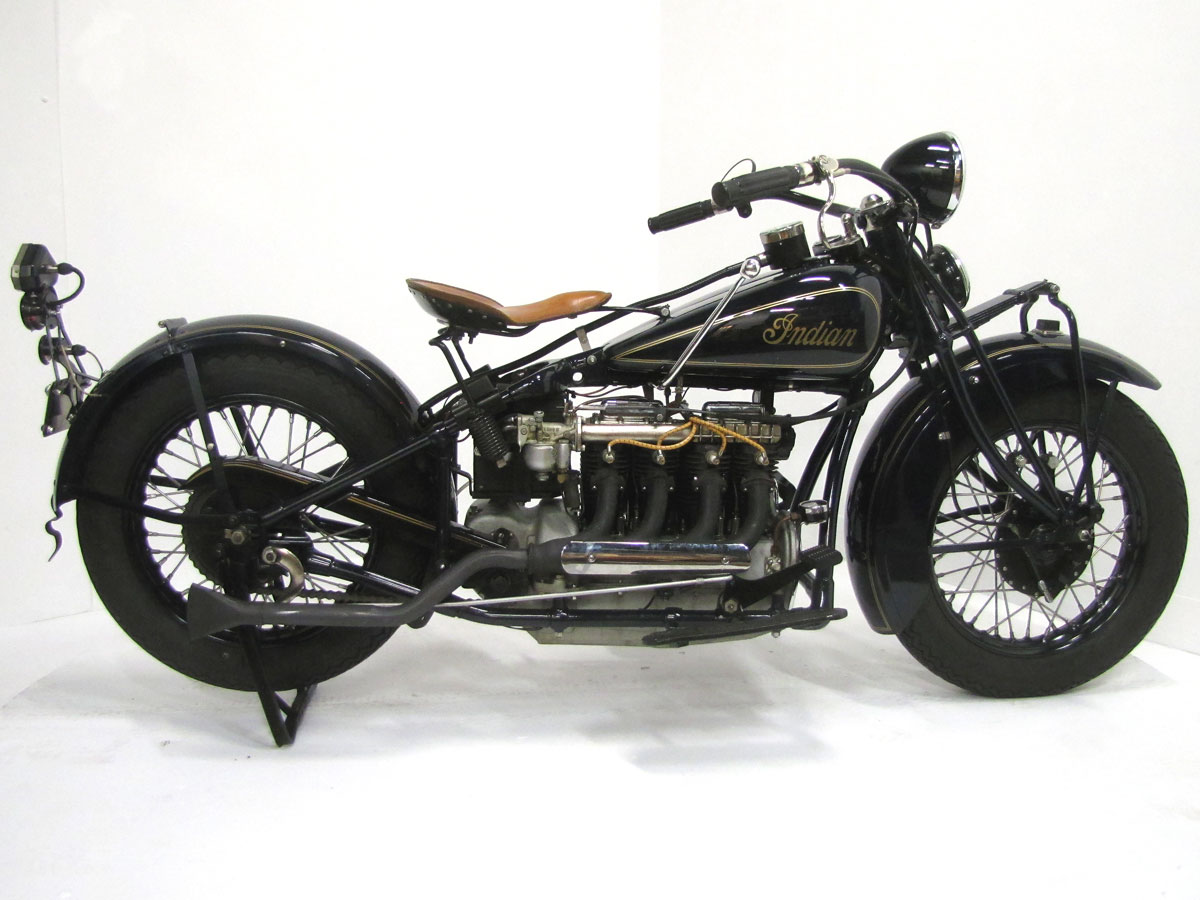 Made only from 1929 to early 1942, smooth and sophisticated the Indian Four was perhaps Indian’s best work and is now cherished by many collectors. Unfortunately, its launch was right in time with the stock market crash of ’29, which ruined its sales potential.  And 1933 was the first year in some time that Indian made a profit; a modest $76,000 according to some sources. Running only at  5% of its manufacturing capacity, fewer than 1700 motorcycles were assembled for 1933.

The early four cylinder design is not technically the work of Indian Motorcycle Company. Bill Henderson started manufacturing a four cylinder motorcycle in 1912, one of the finest machines of the era. After Henderson Company ceased manufacturing the Four, Indian purchased rights to manufacture Henderson’s  Ace design in 1927. Indian renamed it the “Indian Ace,”  then the “Indian Four,” and launched it in 1929. Oddly, it retained Henderson’s right throttle/left shift layout atypical of Indians.

Over just a few years Indian’s Arthur Lemon made considerable design changes including the frame, fork and an engine main bearing upgrade and the Model 402 was born. “Recirculating Lubrication” was a big improvement with some literature stating a quart of oil was now lost in 500 miles instead of 200. Another new design, the “upside down four” was manufactured only in 1936 and 1937,  then the more common inlet over exhaust “IOE” design returned in 1938. The Model 440 arrived in 1940, and was the first with classic skirted fenders and plunger rear suspension, the last with 18″ wheels, and is considered one of the finest Fours made in its day. The last year of Indian Four manufacture was 1942, with America’s involvement in World War II on the horizon.

An interesting side story is that Harley-Davidson considered a similar approach. They visited the financially strapped Cleveland Motorcycle Company and carefully examined its Four, but declined to purchase the rights to manufacture it. Soon Cleveland went out of business, Henderson was gone and Ignatz Schwinn would close Excelsior in 1931, leaving just Harley-Davidson and Indian, with E. Paul DuPont to work through the Depression years.

This deep blue Indian Four is on loan from Roman Frackiewicz and is one of many fine Indians you can view the next time you visit the National Motorcycle Museum.