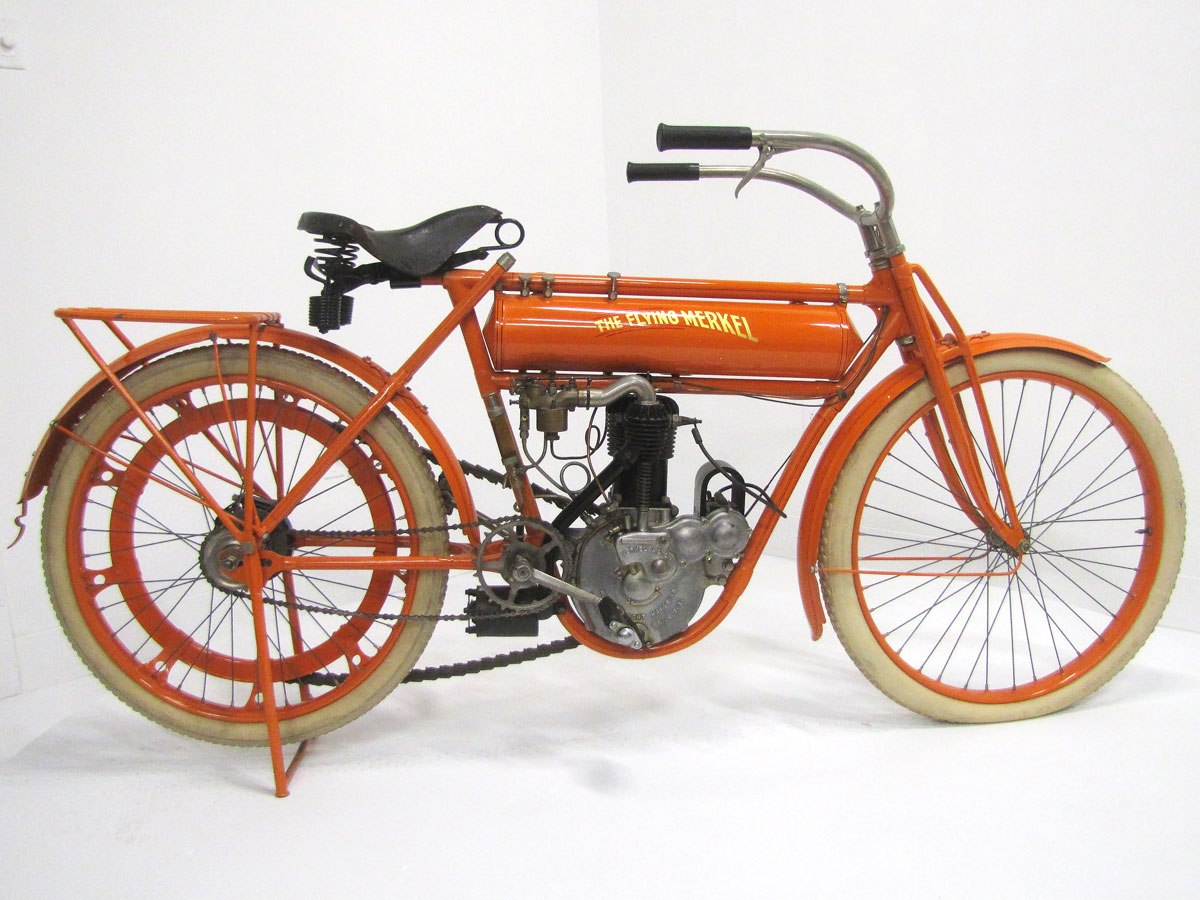 The Flying Merkel is among the most notable early American motorcycles. While Harley-Davidson, Indian, Thor and Excelsior built fine machines, Joseph Merkel sought to bring design and technology not seen in any motorcycles before. Now at the National Motorcycle Museum, you can view one of the largest permanent displays of Merkels anywhere on the planet. That grouping includes an ultra-rare Flying Merkel Racer, a Merkel Light and other twins and singles, even a bicycle from Merkel’s seven year existence.

This week’s featured bike, a 1911 Merkel single, has spring suspension front and rear, but you have to look close at the right side rear 3/4 view to see the spring housings and swing arm pivot near the pedal crank housing. Otherwise it’s a traditional loop frame and an inlet over exhaust engine with belt drive. Lubrication was an adjustable drip system augmented by a manual sight glass pump.

In 1902 Joseph Merkel set up shop in Milwaukee, Wisconsin to produce motorcycles. Merkel hired the best competition riders. Mechanical developments from racing led him to design a  fork so good it was used by other brands as well. Most remarkable for the time was Merkel’s rear suspension, a “mono-shock” of sorts with a spring unit under the seat and a triangulated swingarm pivoting just behind the pedal crank. It’s similar to a design used by Vincent, then Yamaha motocross racers many years later. Joseph Merkel was among the most innovative of early motorcycle designers experimenting with self-starting and using rear suspension almost 50 years before some American makers adopted it. Belt drive was generally shunned by Merkel; he favored the more efficient chain rear drive for most of his motorcycles.

Though this particular machine uses an atmospheric intake valve, Merkel also gave attention to engine design incorporating cam operated inlet valves where others were still using atmospheric valve designs. To bring durability, he began to use ball bearings on the crankshaft early on. Though short lived and ultimately a failure, his spring operated starting system self-wound each time the engine started, ready for the next round of starting.

Distinctive fuel tank shapes and the orange paint make Merkels immediately identifiable. The Merkel company had several owners and locations over the years. It was purchased by Light Manufacturing, moved to Pottstown, Pennsylvania in 1909 and the name Flying Merkel was added. Then in 1911 Merkel was moved to Middletown, Ohio after Miami Cycle Manufacturing purchased the company but ceased manufacturing in 1917.

This Flying Merkel is part of the John and Jill Parham Collection, one of the largest groupings of Merkels in one place, the National Motorcycle Museum.
Specifications: