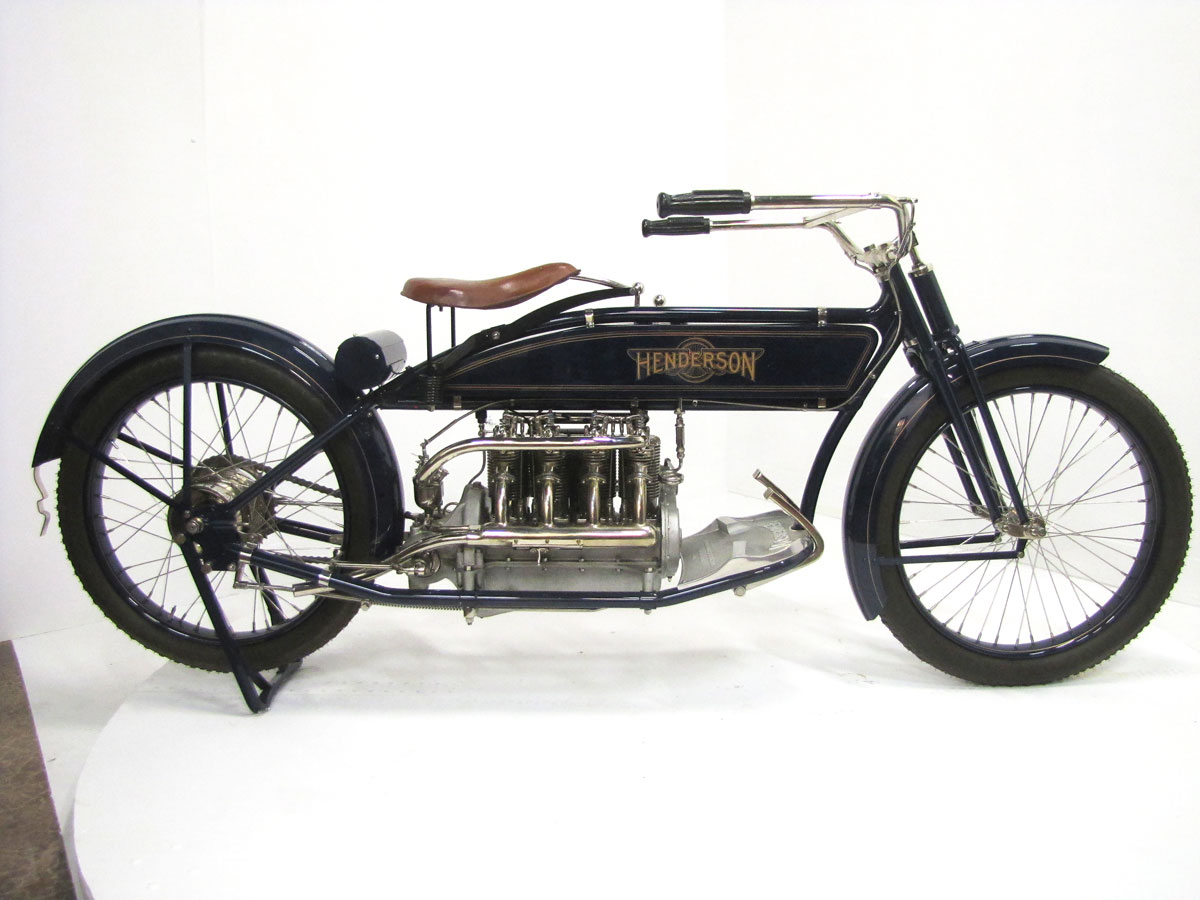 In a museum, at a bike show or a swap meet, you can spot an early Henderson silhouette even two hundred feet away. Most ‘teens motorcycles have 55 to 58 inch wheelbases, early Hendersons are over 65 inches axle to axle. Earliest designs, 1912 and 1913, actually had passenger seating and footboards in front of the rider/operator! Quite unique and adding to their interest.

Though 100 years ago dozens of motorcycle brands in America, England, Japan and Europe made machines that served as simple and economical transportation, some makers focused on luxury or performance. Four cylinder engines offered smooth power and in the early years could be built up to about 1000cc’s. Smoothness, horsepower and torque resulted, along with a certain amount of prestige. With their four cylinder Henderson motorcycle launched in 1912, and with their ACE some years later, the Henderson brothers wanted to make the best and the fastest machines.

Deliveries of the first Henderson Four began in January 1912 as the third motorcycle brand to come to market with a four in the USA. The Henderson Motorcycle Company of Detroit, Michigan had only been formed earlier in 1911 and this was the company’s first design. William G. “Bill” Henderson formed a partnership with his brother Tom to build motorcycles: William brought creative genius, Tom financial skills. The first prototype Four had a belt drive, but the production bike featured a chain; four cylinders, chain drive and long wheelbase were Henderson trademarks.

In 1913 the Model B was launched with a better brake, lower seat and a girder fork. 1913 also saw the return of Carl Stearns Clancy of New York having taken about a year to ride around the world on a Henderson. The publicity from his ride was enormous. For 1915 the Henderson design incorporated a two-speed hub. In 1917 the new Model G was ridden from Los Angeles to New York in 7 days, 16 hours and 15 minutes by Alan Bedell, beating “Cannonball” Baker’s 1915 record time aboard an Indian twin.

After about eight years making very fine four cylinder motorcycles, in 1917 the Henderson brothers sold the company and Henderson brand name to bicycle/motorcycle manufacturer Ignaz Schwinn. Schwinn subsequently built Hendersons at his Excelsior Motor Company in Chicago, Illinois. But the Henderson brand motorcycle finished production in 1931 when Ignaz Schwinn simply announced, “Gentlemen, today we stop,” and Schwinn’s focus was on bicycle production. The Henderson brothers waited out their two year non-compete clause with Schwinn, then in 1920 released the fabulous ACE.

This fine Henderson Four was restored by the late Dick Winger many years ago. His wife Wanda donated the Henderson to the Antique Motorcycle Foundation and the AMF is loaning it to the National Motorcycle Museum for display in the Best of the Best gallery, sponsored by Hagerty Motorcycle Insurance.