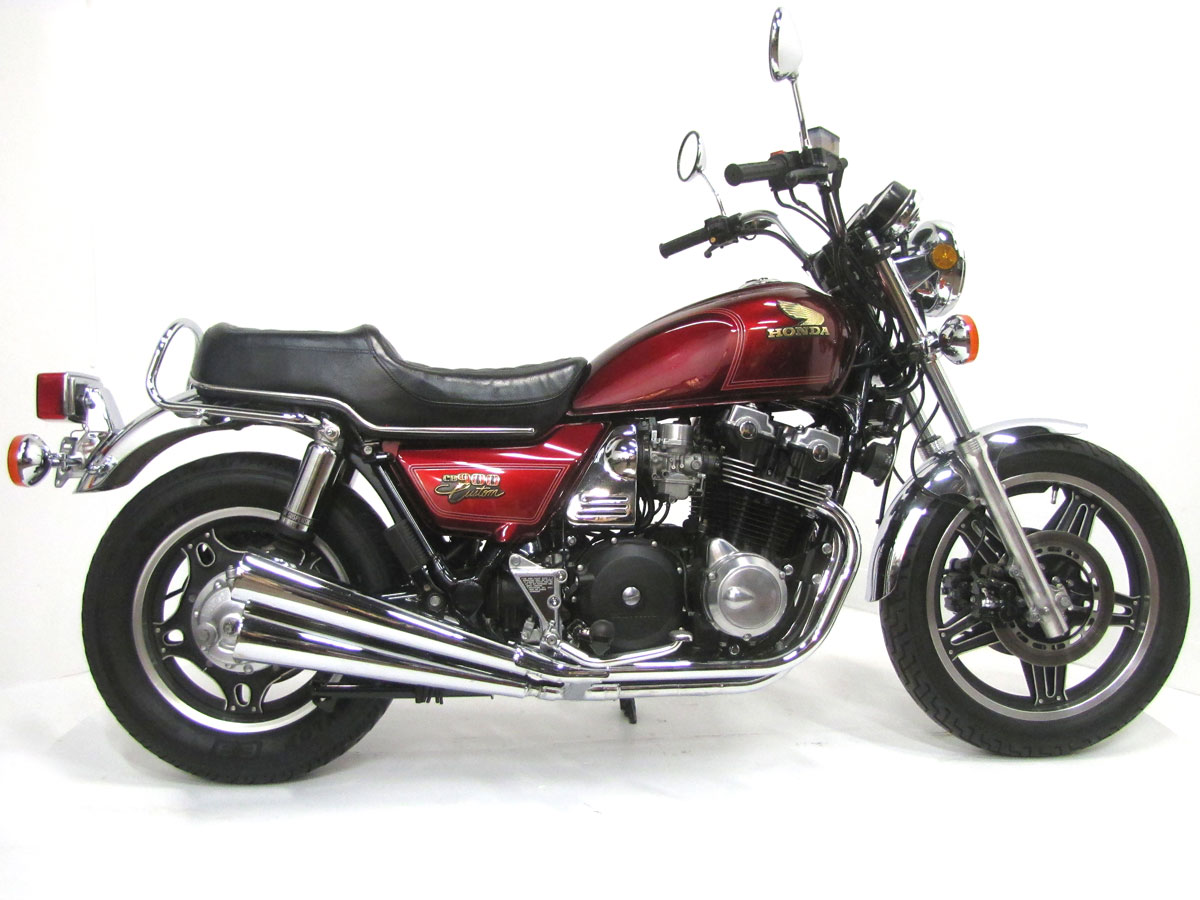 Then most likely observing Harley-Davidson’s offerings, these manufacturers noted a trend toward a “mild lean back” riding position. This called for a new version of the basic machine, a higher handlebar and lowered/stepped seat and possibly moving the footpegs forward a bit. Kawasaki did it best first, most would agree, with the KZ900LTD and KZ1000 LTD. Doing a rework of the CB750F/CB900F and CB750K models, Honda followed suit in 1980 and added the CB900 Custom to their lineup, later the punched out CB1000C.

The original Honda CB750 was powered by a single overhead cam four cylinder engine. This was the beginning of the “universal Japanese motorcycle” and not a bad thing. After a 1969 to 1978 production run of the SOHC CB750, a completely new engine arrived in 1979 in the form of the DOHC CB750F and CB750K. These were more sophisticated and higher output DOHC-powered machines. Honda moved toward the CB750C /CB900C models with cleaner, easier to maintain shaft drive; now there were three versions of CB750 and CB900. While they were at it, they added a dual range transmission to the already in place 5-speed giving the C models 10 speeds. This reportedly dropped cruising RPMs by about 500 and increased fuel mileage. Luckily all this complication in the driveline was Honda durable. In 1978, after making only traditional spoke wheels for decades, Honda brought out the Comstar wheel. Each wheel is made from an aluminum hub and rim and ten steel spoke stampings all riveted together. It mimics a mag wheel with no confirmation of weight savings, though use of an all-aluminum Comstar version in factory road racing says it’s strong. The CB750K’s got traditional spoke wheels, F’s and C’s got the Comstars. Custom colors for 1982 were two-tone blue or two-tone red.

By 1982 Honda chose the all new liquid cooled DOHC Vee-Four engine design for most of their top flight 750 to 1100cc machines, the Sabre and Magna and in 1983 the then-radical VF750F Interceptor sport bike. The V-Fours replaced many of the across the frame air-cooled four cylinder-powered Hondas. More complex and no lighter, the V-4 worked well in cruiser designs as it was narrower mimicking somewhat a V-Twin. So this smooth, sweet traditional across the frame four left the Honda lineup. Not only that but the Shadow V-Twin line-up hit in 1983 as Honda moved quickly to figure out what riders wanted. How it sat, how it looked and how it sounded were all extremely important. The CB900C, and later the CB1000C were excellent bikes built up from a standard in-line four, but too conventional as motorcycle design started a path toward extreme specialization.