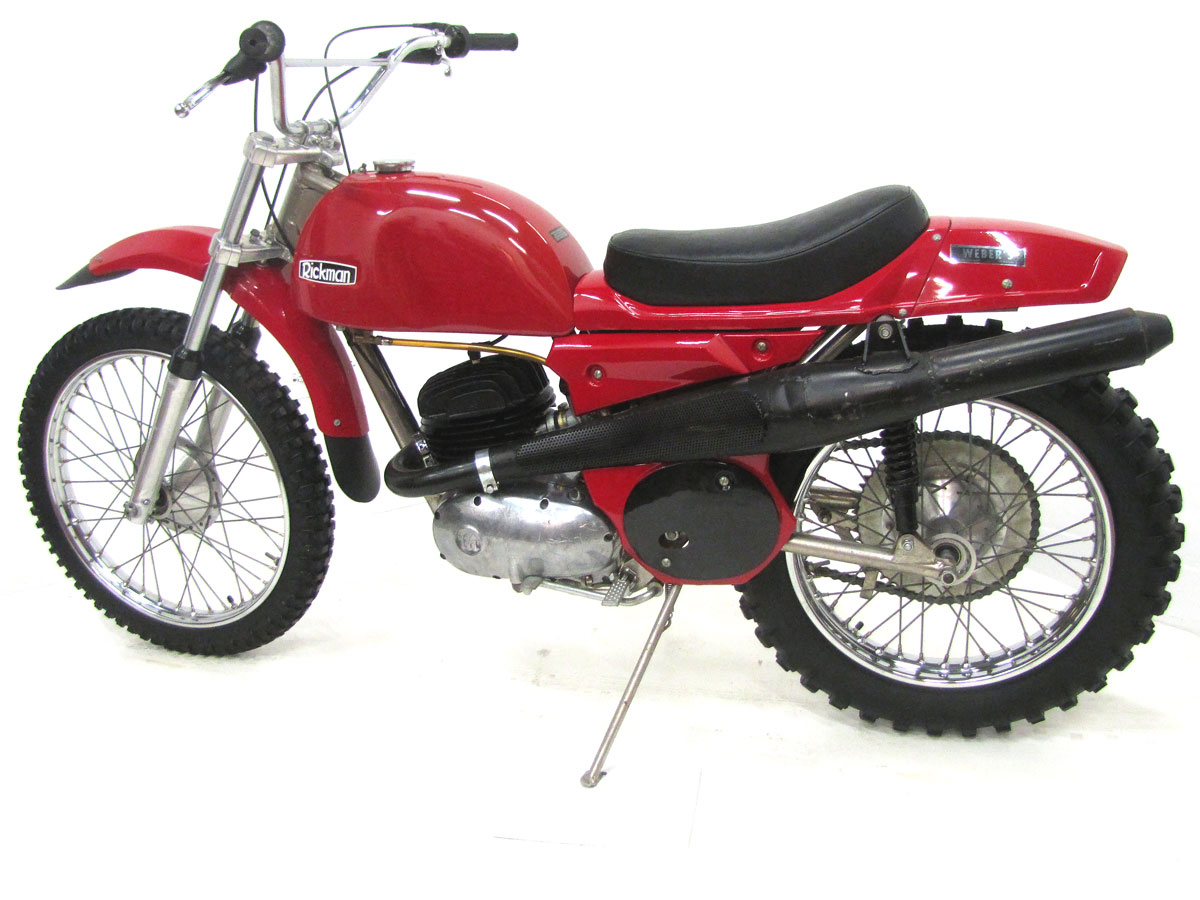 Until the mid-1960’s there were few makers of lightweight, purpose-built motocross machines. Nothing much made in America worked, the British held to their antiquated “thumpers” but European makers Husky, Maico and CZ were gearing up with two-stroke power and the revolution was on.

Brothers Don and Derek Rickman were professional scrambles riders in the late 1950’s, into the 1960’s. They had the best British machines money could buy, but knew there was still room for improvement in chassis design. They first set about building a better frame and swingarm. True to their country, the Rickman brothers evolved the British bike with their own chrome-moly frame, special hubs, body work and other chassis fittings. They first did so with a 500cc Triumph twin engine. Using their new design they continued to win races and championships, and created a market for their chassis kits among other riders.

But as European lightweight two-stroke machines began to dominate, the Rickmans looked around for an engine supplier so they could start down a new path, away from four-stroke 500’s. Montesa, Zundapp and Bultaco were companies that would sell them bare engines. The Rickman Montesa uses a right-side shift 53M engine, the Cappra GP, four-speed, 250cc power-plant. Suspension components include Metal Profile forks and Girling shocks. The carb is an Amal. Typical Rickman quality frame details include “snail” chain adjusters on the swing-arm pivot.

Where most British bike frames employed cast iron lugs and mild steel tubing, a Rickman chassis is large diameter Reynolds tubing, carefully fit and brazed together, then nickel plated. The end result was a bike weighing 30 to 40 pounds less than a factory machine. Over time, the Rickmans offered chassis kits for all sorts of engines and applications, even road racing, but this Montesa is among their first offerings of complete ready to race bikes.

If you are a baby boomer, you know how quickly things were changing in motorcycle design and marketing around 1970. The Yamaha DT-1 hit in 1968, the Honda CR250 Elsinore in 1973 and as they did in the 1960’s, the Japanese manufacturers dominated in sales if not in race winning. Expensive and a bit behind the curve when compared to Husqvarnas, Maicos, Bultacos and CZs, even the newer Japanese machines, the Rickman brothers soon moved to manufacturing other transportation innovations. For their design and innovation work Don and Derek Rickman were inducted into the AMA Motorcycle Hall of Fame in 2007. This 1972 Rickman Montesa Motocrosser is on loan from Mark Sturm and is one of many motocross, enduro and trials bikes from Europe, England and America you can see when you visit the National Motorcycle Museum.