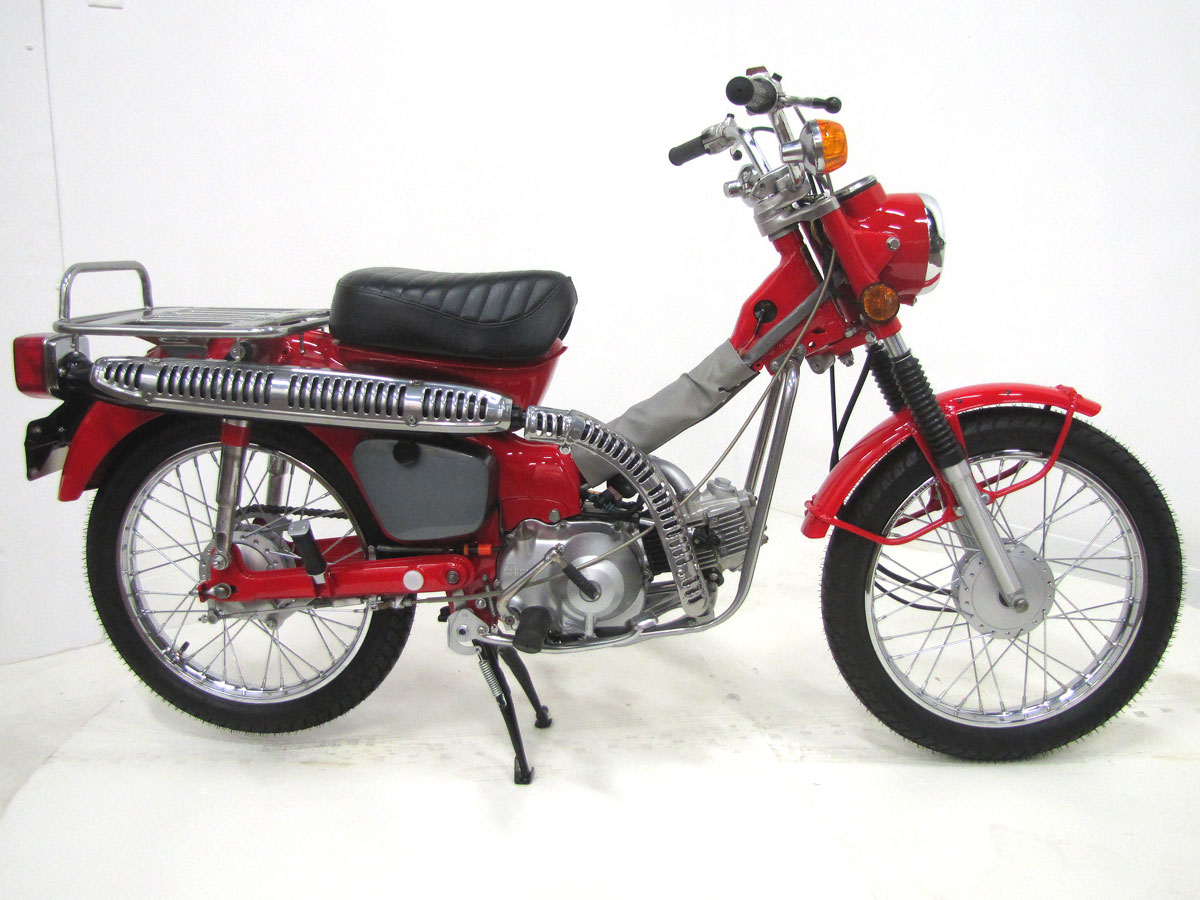 Tote Gote, Rokon Trail Breaker, the list of two-wheeled machines that would get you deep into the woods began to grow in the early 1960’s. Honda entered the market with the Trail 50 in 1962. The step through machine was so basic it had no true muffler or front fender. A small push-rod 49cc engine drove through a 3-speed automatic clutch transmission, and the machine came stock with a large overlay rear sprocket, and a short length of drive chain, offering a dual range final drive. Under the seat is the fuel tank. The air intake was mounted nearly at seat level. All about function, the standard luggage rack was bigger than the seat and very useful for camping equipment, packs, maybe even moderate sized game. Shotgun scabbards mounted easily.

Lightweight and very nimble, the machine grew in displacement and sophistication over time. The Trail 55 was offered for 1963 through 1965. 1964 brought the Trail 90 model and around 1967 the overlay sprocket setup was replaced by a true 1.867:1 dual range auxiliary gear box. Now with an OHC engine, it was sold that way until the late 1970’s. It then grew to a 110cc OHC machine and was sold into the mid-1980’s.  Early models used a pressed steel frame, fork and swingarm; a hydraulic fork  arrived in 1969, moveable handlebar in 1970.

Realize that by 1970 Honda and the other Japanese makers offered some serious trail bikes, two-stroke and four-stroke. Yet the street-legal Trail 90 was for a different market and still popular enough in America and other parts of the world to remain in production. You still see them used as transportation for motorhome camping and at swap meets of all types. Easy to start, ride slowly, and park, with a milk crate strapped on, it’s capable of hauling your finds of over 100 pounds. For 2020 Honda introduced the Hunter Cub 125 with disk brakes and ABS. Retro is popular as this machine, in limited markets, joins the Monkey, Super Cub and Grom.

This Honda Trail 90 is on loan from Jay Gaard who has over time supported National Motorcycle Museum exhibits by loaning all sorts of original and restored trials, motocross and enduro machines, minibikes and ATVs. “The CT90 was the 156th bike that I purchased. Rescued it off a pile of junk in southern Minnesota for $20. Took it to show my dad and he said, “I think you should do something with that.” Gaard actually restored the bike twice over time. His best friend, his father Hubert Gaard, pictured with the CT90 on Jay’s lift, suggested it be painted Honda Red, even though Honda did not offer red that year. Recently, Gaard bought his 300th motorcycle.