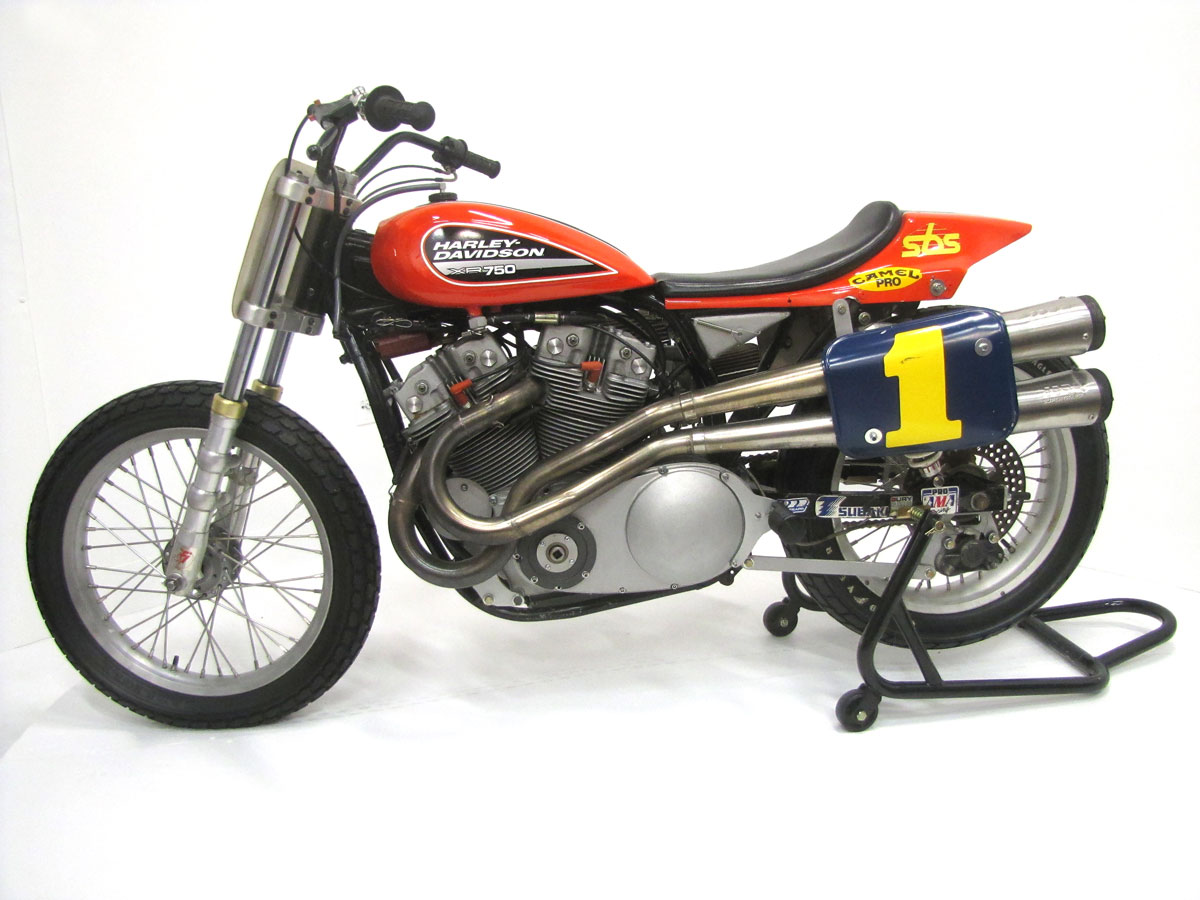 The last in a long line of Harley-Davison production dirt track racers is the XR750. Initially made in 1970 with iron cylinders and heads, in 1972 the “Alloy XR” hit the tracks and dominated for almost four decades. As others tried to beat the XR750, it was confirmed that the power pulses of a 45 degree V-Twin are perfect for getting the right hookup of the rear tire against the dirt.

As with most racing motorcycles, each tuner has his preferences. Over time almost every component of the XR750 was swapped out with better after market parts; frames, forks, shocks, exhaust and of course rims, spokes, tire type and size varied. Engine internals were developed outside the Harley race shop as well.

Through experience, Bill Werner developed his preferences when building bikes for his riders. For Scott Parker’s 1991 season he used an oil-in-frame Knight twin shock frame and Ceriani forks, White Power twin shocks. The alloy rims are Sun and if you look closely near both valve stems you can read “SQUATTIE”, front rim, and “JAY”, rear rim, engraved there referring to Scott and Jay. Werner says it is typical to mark parts in cases of a component loan that might not come back during a racing weekend. The triple trees are a Werner innovation, adjustable for trail. They are marked “JS” noting they were on a Springsteen bike before Scott Parker began to use them. Hand me downs are typical, according to Werner.

In the serial number, this is the 27th XR750 made that year. The first “8“ says it’s an engine released to the factory race shop, not to a dealer. The final “8“ is part of the date code for 1978 so these cases were used for many years. The fiberglass tail section has four holes in it from a camera mount, pointing rearward to the guys in the chase for Parker’s frequent lead. The seat cushion is a quick detach hook & loop Werner design as is the clutch release, caliper mount and many other details.

This XR750 was bought by Mark Mederski about 15 years ago and was displayed in the DIRT TRACK HEROES exhibition at the National Motorcycle Museum about 8 years ago. It’s engine is fresh but the chassis left as-raced except for new fasteners. The XR750 motor is very versatile. When you visit the Museum you’ll see road racers, dirt trackers, hillclimbers and so much more.