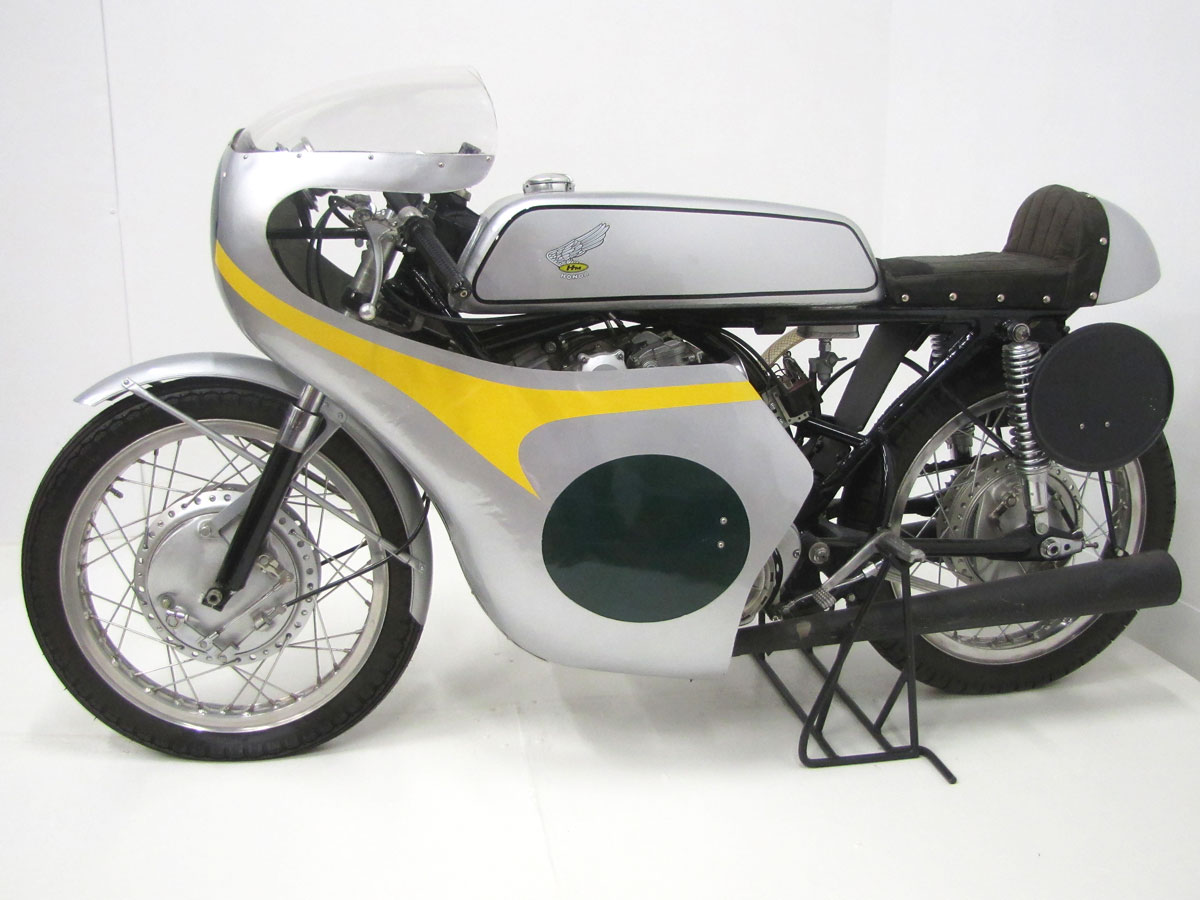 In Honda terminology, “CR” Stands for Customer Racer, and back in the 1960’s Honda made them in 50cc, 125cc, 250cc and 300c road racing versions. These are hand made high performance road racers, all extremely rare by any standards.

Soichiro Honda believed that entering racing competition helped him learn performance and durability. In the late 1950’s, about ten years after starting his company, he entered Grand Prix level road racing and soon had great success. But the Honda factory was racing multi-cylinder machines made in very small numbers for factory riders. To help privateer road racers win on Hondas he built state of the art singles and twins and made them available in very limited numbers; less than 20 CR77s were made, about 110 CR72’s, the 250cc version, were made.

So it is with rare and expensive motorcycles that some enthusiasts take the route of replicating them. This bike began life as a Honda CB77, the 305cc Super Hawk which was made by Honda from 1961 to 1967. The frame is stiffened and reworked to look more like a CR77 racing frame. The engine uses the cylinder head from a GS400 Suzuki; a DOHC engine, as is the CR77. Special 10.5:1 pistons were made by Forged True. A double row oil pump was installed, an external oil line lubricates the top end. 31mm Magnesium Keihin carburetors are mounted on custom rubber spigots.

The real CR uses a dry clutch and gear primary so parts from the TZ250 Yamaha were incorporated and the clutch cover modified putting the clutch in the breeze for cooling. A seal behind it keeps oil in the crankcase. Adding one more gear, Nova provided a 5-speed racing transmission which, unlike a stock Super Hawk, is set up to shift one up, four down.

Forks are reworked production Honda CB77 parts, but the front brake is a combination of an early GT750 Suzuki hub with Tony Milk replica CR77 backing plates. A custom cable junction box was made. Alloy rims replicate CR77 parts but are by Akront. Tank and seat are by Peter Keyte, England, fenders are custom. Long time vintage Japanese motorcycle enthusiast Ellis Holman conceived the machine, gathered many components, but it was completed, with extensive machining, by Doug Swick. It’s from the John and Jill Parham Collection and is one of dozens of Japanese street motorcycles and a good number of road racing machines, original and restored you can see when you visit the National Motorcycle Museum.