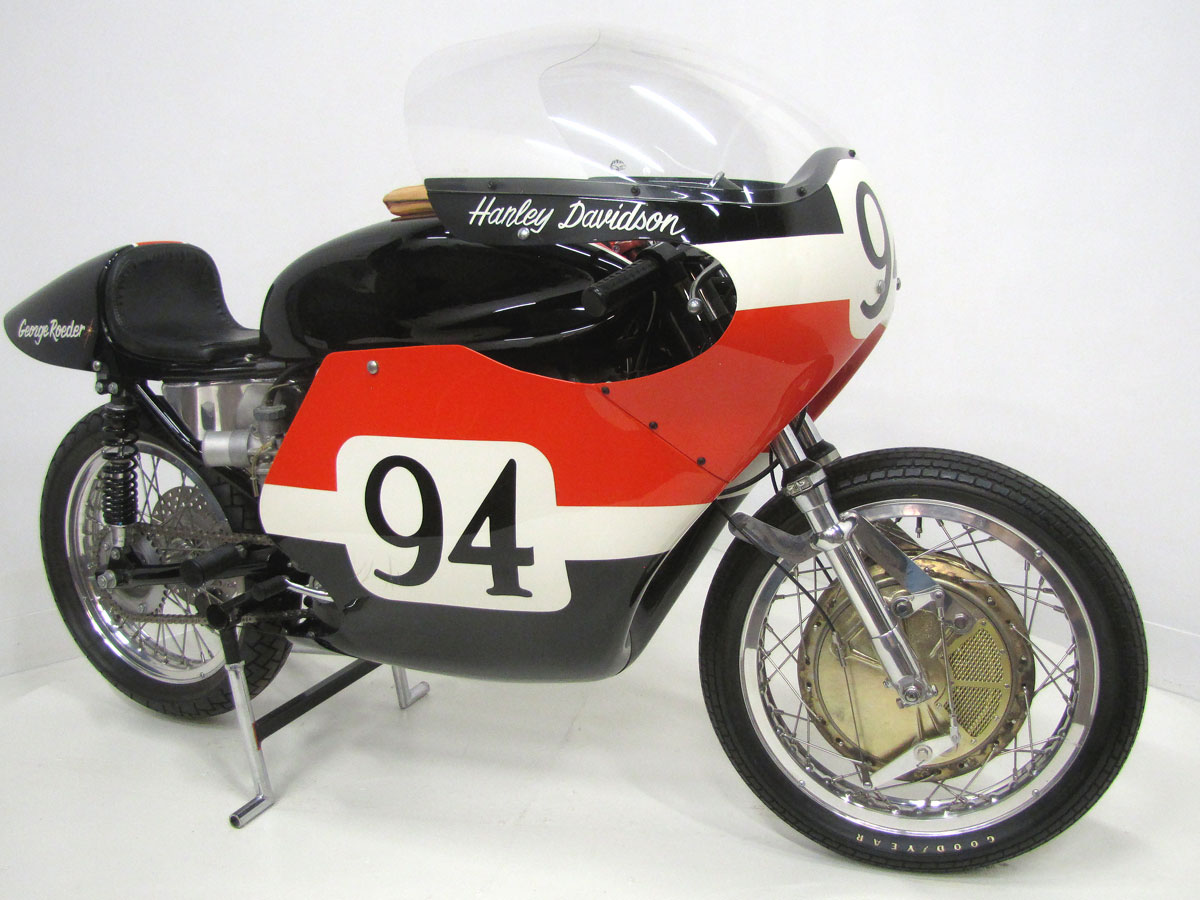 The new overhead valve XR750 dirt track racer was released in 1970. Enough were built to satisfy AMA homologation rules, plus about ten complete road racers, the XRTT, ready-to-race by factory team riders and others Harley selected. A combination of function, pure aerodynamics, unique styling and great detail make it a bike we love to stare at from many angles even 50 years later.

When Harley-Davidson built the earlier side-valve KR750 dirt track racer, they also offered a variety of tuning parts to convert it for road racing, or you could buy a complete KRTT road racer. This allowed riders in pursuit of the Grand National Championship the opportunity to also participate in road races and earn more GNC points in a season.

A long and complex story, Harley’s race shop, as well as private teams going road racing, tried numerous approaches to the iron XR750 engine, experimenting with bore and stroke configurations, head design and more. Likewise a range of frame designs were tried. Harley’s Italian connections helped with forks, brakes and controls which were very worked out by companies focused on road racing. In this period disk brakes were working well, but the massive Fontana four-leading-shoe drum brakes were still preferred by some riders. In 1972 the “alloy” XR750 was released as a dirt track racer; the engine was a great improvement over the initial “iron head” design. That alloy XR750 style motor powers this XRTT.

Though Cal Rayborn won the Trans-Atlantic Match Race series in 1972 on an iron head XRTT, in the end, the XRTT was often out classed by nimbler British machines. Then came the onslaught of Japanese production road racers like the 350cc Yamaha TR350 Don Emde won Daytona on in 1972 and the TZ750 that swept American road racing for a decade. This left Harley-Davidson out of the game. But hopes for the Grand National Championship wins stayed alive with dirt track and road racing programs being split in 1985. There was no longer a need for riders focused on dirt track racing to go road racing. But looking at all XR versions, besides having more wins than any other motorcycle in AMA racing, it has also been called the “most successful race bike of all time.” After 50 years of service and much development, some experts say the later, alloy top end XR750 is still a competitive dirt track racer!

Ohio expert George Roeder was never given his due as a road racer. He just missed winning pavement National races on several occasions. He finished second at the 1960 Laconia National and placed second twice at Daytona in 1960 and 1966. Roeder was better known for his dirt track skills; he was one of the most graceful broad-sliders ever. He won eight Nationals on dirt tracks in his career. Roeder is also considered one of the best riders to have not been Grand National Champion. He lost the 1963 title to Dick Mann by one point! In 1967 he lost the title to Gary Nixon in another tight championship. Known as a one of the nicest guys ever in the GNC, George Roeder passed away in 2003.