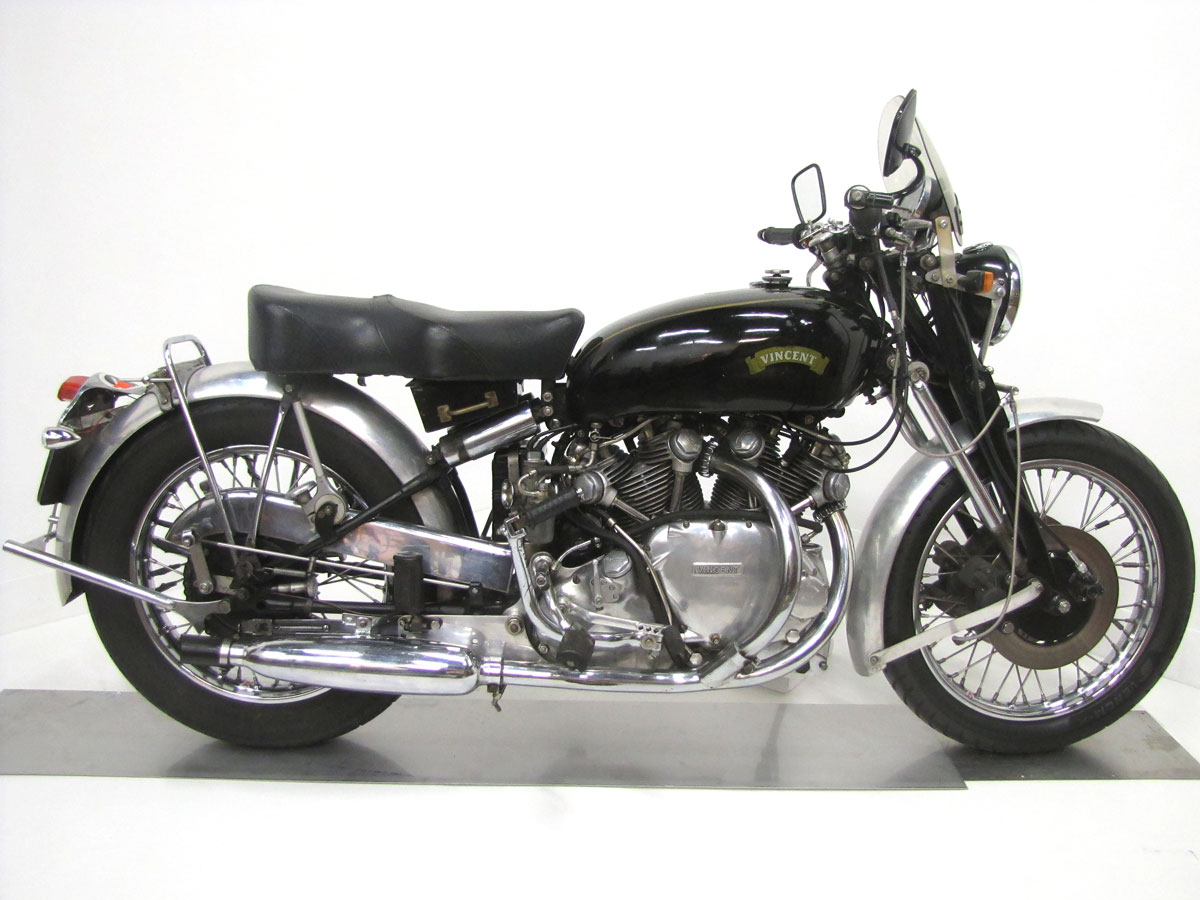 This week’s Featured Bike story was written by its owner Matthew Biberman, son of Big Sid Biberman, the famed Vincent tuner and racer. We thank Matthew for his knowledge of Vincent motorcycles, and his reflections on his personal motorcycle.

Although its earliest motorcycles date back to the late 1920s, Vincent’s post-war offerings (consisting of 499cc singles and 998cc twins) have come to define the mark’s fame. The first postwar twin was ridden on April 27, 1946. This model, christened the Rapide, featured many innovations and improvements. Vincent’s Chief Engineer Phil Irving continued to develop his earlier Series A design by incorporating his own four speed transmission (able to handle in excess of 300 bhp)  as well as a unique dry clutch capable of transferring such immense loads.  This Series B redesign stands as one of the first examples of a unitized gearbox within the motorcycle industry, a development that brought with it immense rigidity, thereby allowing Irving to dispense with a conventional cradle frame and use instead the motor as the bike’s main stress member. Consequently the swingarm pivot anchorage was made integral to the main crankcase.  The angle of Vincent’s postwar vee twin was also widened slightly from 47.5 to 50 degrees, enhancing smoothness and timing.  With the absence of the front down tube, the front wheel could be pulled in for a reduced wheel base of 56 inches, giving the bike its first moniker– “the little big twin.”

In 1948, Vincent introduced two new models: the Series C Comet (his reborn 499cc single) and a modified “sports” model of his Rapide twin.  Dubbed the Black Shadow, this model featured an increase in horsepower (from 45 to 55 bhp) and in top speed (from app. 110 mph to 125 mph).  These improvements were achieved by raising the compression ratios from 6.8 to 7.3 to 1 while using larger Amal carburetors, up from 1 1/16 to 1 1/8 inches.  New camshafts (MKIIs) were employed, and in general the motor was subject to an overall enhancement in tuning, e.g. polished con rods and rockers, along with inlet port refinement and polishing.  The resulting increase in speed exceeded the standard three inch Smiths speedometer then fitted to Rapides.  Therefore the Black Shadows were fitted with special five inch chronometric units designed by Smith’s in conjunction with Irving, who, for the sake of consistency, unthinkingly omitted the fabled “ton” as the dial went from 90 to 110, then 130 before topping out at 150 mph.  In his Autobiography, Irving speculates that this unthinking omission on his part did much to cement the Vincent’s legend as (in the words of Hunter Thompson) the bike that would outrun an F-111 until take off.  Although the first 78 Black Shadows were Series B models, subsequent machines were designated as Series C models, because these bikes were built not with Brampton front forks but rather with the factory’s own in-house units.  Called “Girdraulics,” these forks incorporated hydraulic dampers and proved far superior in eliminating lateral flexing, an improvement especially important for sidecar use.

This 1951 Series C Black Shadow is now on loan from author and Vincent specialist Matthew Biberman. As detailed in Biberman’s memoir Big Sid’s Vincati, this example was given to Matthew’s father “Big Sid” by his riding buddy Ed Leksa in the mid 90s. Sid then restored the bike for his son.  At that time, Sid–as was his wont–did minimal cosmetic work, retaining the original paint and period chrome pieces, while servicing all working components.  During this process Sid decided not to repaint the motor black, for two reasons: first, he preferred the unpainted look of Irving’s motor, and second, ease of maintenance.  From a lifetime of experience, Sid had come to dislike the vigilance that the paint required if one wanted to prevent petrol staining, particularly from the front carburetor’s float bowl.  Other modifications include a Series D type distributor and coil ignition system; 12 volt electrics including turn signals and a modern Alton charging system, and finally, a modern dual disc brake set up in the front, paired with a single drum brake (as per Series D practice) in the rear.