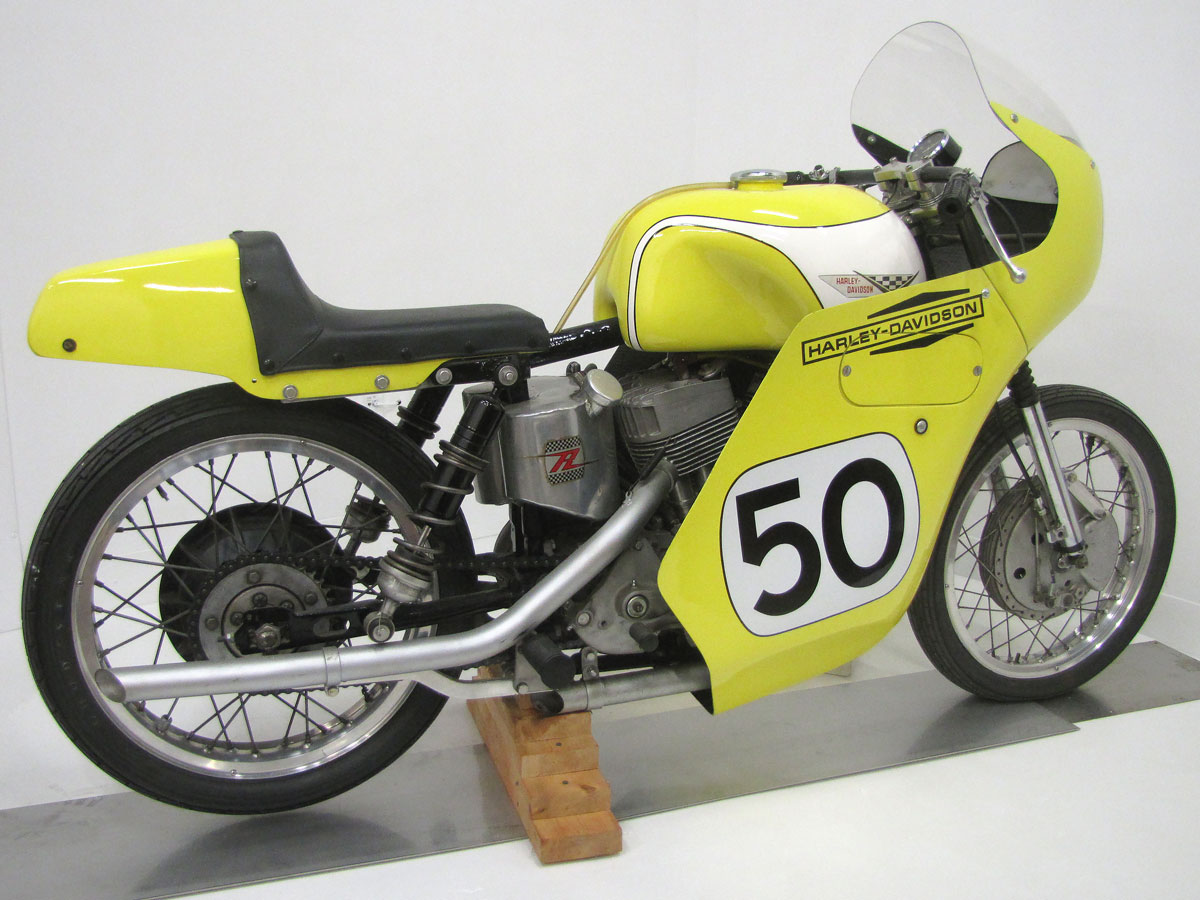 The “K Model”, an “import fighter” was hot on the on the streets in 1952. Starting in 1953 its factory racing version, the KR750, was a strong and consistent contender on the dirt tracks of America. Race boss Dick O’Brien and his team also road raced the KR in its TT (road racing) trim.

In 1952 Harley-Davidson brought out the K model to compete with the middle weight British machines from Triumph, BSA, Matchless and Norton as well as Indian’s famed Scout. The K came with rear suspension, the FL Big Twins remaining rigid until 1958. Unique among Harleys at that time, the K model even shifted on the right, like a British bike. And the K model was designed as a unit construction machine, Harley’s first V-Twin designed that way. The Harley-Davidson factory also made available road racing components for the KR750. Besides engine internals, brakes, six gallon fuel tanks, big oil tanks and full fairings were available as catalogued factory racing parts. Note that this machine has an Italian twin leading shoe front brake, Fontana or Ceriani. Its rear brake is based on a factory racing bulletin that outlined converting a factory front brake to serve as a rear.

While the factory KR750 dirt track racer was a rigid like the old WR, the KRTT was designed for road racing and used a swing-arm and twin shock rear suspension; a bolt on subframe allowed riders to switch back and forth for any type of track competition. Strong and lightweight, chrome moly tubing was used with traditional cast iron frame lugs.

This #50 bike was originally owned by the late Phil Peterson, a Miami, Florida Harley-Davidson dealer. Next Tony Murguia rode the bike for Smitty’s Harley-Davidson of Moundsville, West Virginia with Bobby Hill as tuner. The bike and rider placed at Indianapolis Motor Speedway in 1963, also won third at Daytona Beach in 1964. Of 15 Daytona Beach National Championship races from 1955 to 1969 riders on KRs took first place in 12 of them. Dave Estep, Columbus, Ohio, a fine racer himself, restored this KRTT. It’s part of the Jill and John Parham Collection and one of numerous Harley racers from board trackers to dirt trackers you can see on your next visit to the National Motorcycle Museum.