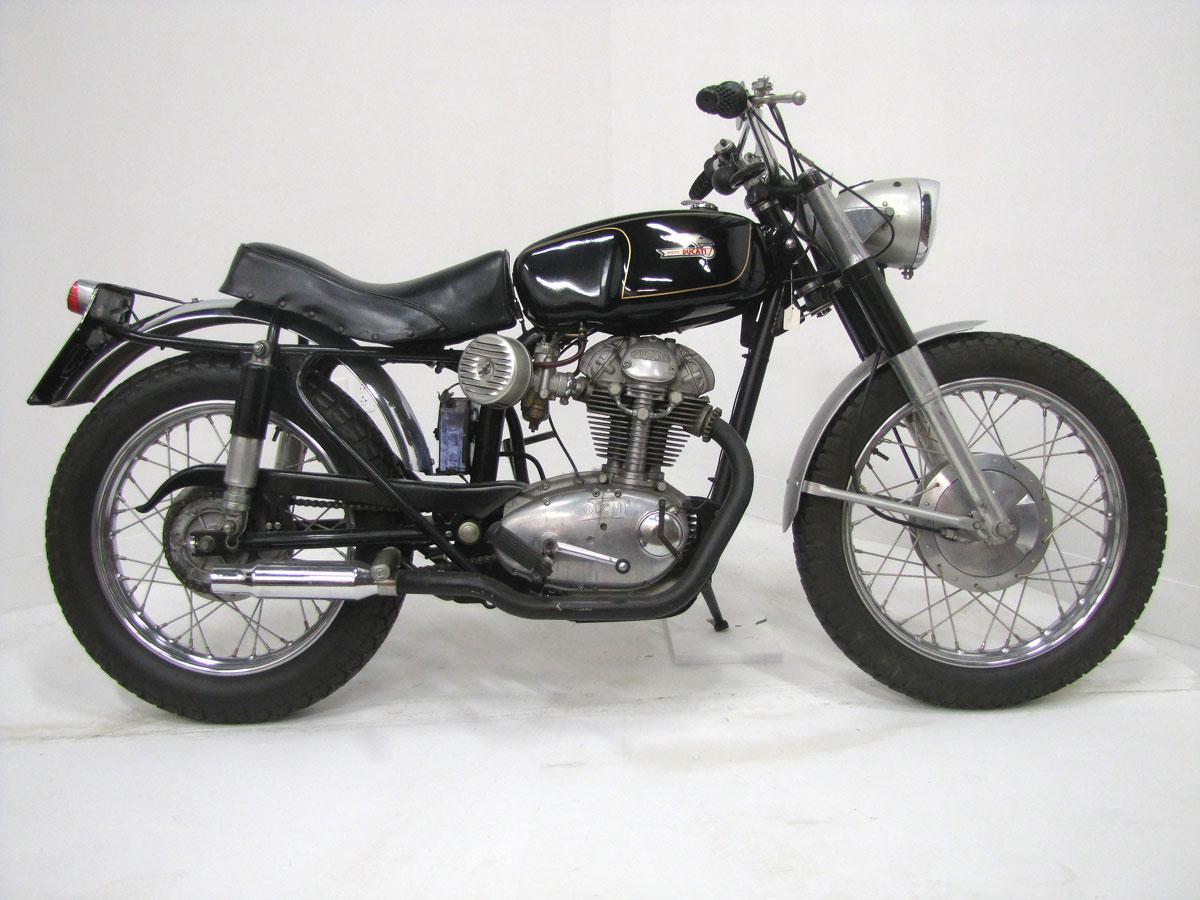 Long before the glorious, and race winning Ducati vee-twins hit the streets in 1972, Ducati was a manufacturer of traditional single cylinder street and sport/race bikes. Some were utilitarian, others with chassis and engines honed to win races like the post-World War II Moto Giro Italia.

Ducati had not built any motorcycles before World War II. Starting with the 50cc Cucciolo in 1946, for about 25 years Ducati focused on sporting and utilitarian single cylinder bikes up to 350 cc’s, then moved up to 750cc V-Twins in 1972. Their focus before the War was electrical devices like condensers, radios, shavers, calculators and cameras, even refrigeration equipment. Transforming bicycles into motorcycles, filling the needs of the Italian population, getting them to work after the devastation of World War II is what drove Ducati to its success in motorcycle manufacturing.

With the 1966 model year, Ducati made the move to design machines with the off-road look popular by the mid-1960’s. This “narrow case” 250 was derived from the Diana street bike. Hence it was not a serious contender in scrambles or dirt track racing events but offered a trim performance look then popular in Europe, England and the United States. In 1972 the much more potent RT450, largely designed for the U.S. market, came available. The RT, for Road & Track, was designed at the request of the U.S. distributor, Berliner. To prove its mettle the RT 450 was entered in the 1971 International Six Days Trial and the Italian team returned home with several medals. Testing the “scrambler” styling theme again for the 2015 model year, Ducati successfully resurrected the theme in several displacement categories and trim levels.

This 250 scrambler is among interesting “bevel drive” Ducatis on loan to the National Motorcycle Museum including a great early 900SS. There’s also a radical Ducati MH900evoluzione designed by Pierre Terblanche in honor of the Ducati Mike Hailwood win at the Isle of Man Senior TT in 1978.
Specifications:

**Desmodromic valve trains use two cam lobes to control opening and closing of each valve; one cam lobe opens the valve, the second cam lobe forces the valve shut. Most engines use one cam lobe to open the valve, but a coil spring to close it.